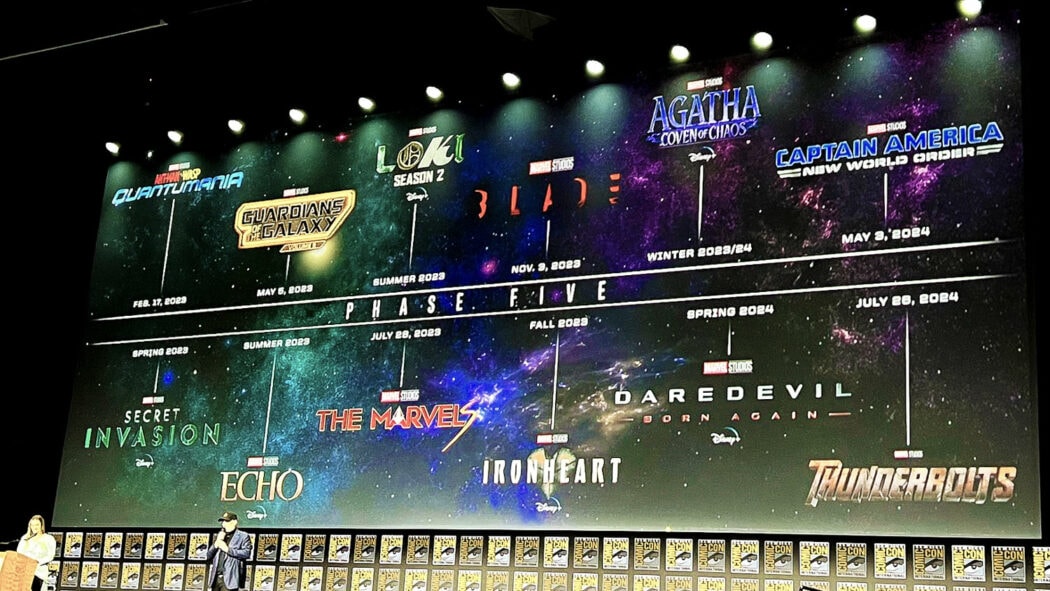 Wow! Marvel really knocked it out of the park at this year’s Comic-Con in San Diego and here’s the full slate of the movies and TV shows announced by Marvel during their Hall H panel.

It was a really big panel for Kevin Fiege and Marvel Studios because they were telling fans what we should be expecting from the next phase of the MCU.

The next phase will be Phase 5, and honestly, we’ve been eagerly waiting for Phase 4 to end and Phase 5 to start?

Why, you ask? Because Phase 4 up until now hasn’t been the most rememberable Phase in the MCU.

That said, it was pretty darn cool getting to see Tobey Maguire and Andrew Garfield’s Spider-Men in the No Way Home!

You can check out all the cool things that Feige announced during Marvel’s Comic-Con presentation via our Twitter account:

Here are all the movies that Marvel announced at San Diego Comic-Con!

So, here are the movies that Marvel Studios announced during their Comic-Con panel in Hall H with their release dates:

We already knew about some of these movies, well, most of them really.

However, we didn’t have release dates for all of them, and we also didn’t know the official title for Captain America 4.

I love the title! Captain America: New World Order has a good ring to it!

Here are all the series that Marvel announced at San Diego Comic-Con!

And, here are all the upcoming Marvel series that are being released on Disney Plus during Phase 5:

Honestly, this is the best lineup of shows!

I’m really excited to see all of these series, but I’m really looking forward to watching Agatha: Coven Of Chaos and Daredevil: Born Again!

These are the ones that I genuinely cannot wait to watch.

To be honest, I can’t wait to watch all of them!

Are you looking forward to watching all of these Marvel and TV shows announced at Comic-Con last night?