Grab a box of tissues! The latest episode of WandaVision (Episode 8, called Previously On) brought on a waterfall of tears as it touched upon the painful topic of grief.

One line, in particular, sparked an online debate. In a scene, Vision (Paul Bettany) tells Wanda, “What is grief, if not love preserving?” That line resonated with many, especially in relation to current times where many are battling the unprecedented loss of both people and normality.

While I shared in last week’s recap that I’m having difficulty understanding the pacing and construction of the show, “Previously On” was a solid penultimate episode.

Let’s get straight to WandaVision Episode 8!

Episode 8 of WandaVision opens with a brief insight into the background of Agatha Harkness (Kathryn Hahn), who we previously knew as the naughty neighbour Agnes.

In this scene, she is crucified by her mother and a coven of witches who accuse her of betrayal.

Agatha begs for forgiveness and promises that she will do good, however, her mother does not budge.

This leads to an exploding fight — adopting the colourful and outward magic aesthetic from dark fantasy movies like Halloweentown and Hocus Pocus.

In the end, Agatha wins and removes a brooch, or possibly a pendant, from her dead mother’s chest.

Zooming its audience back to the Westview present, Wanda Maximoff (Elizabeth Olsen) is trapped in Agatha’s basement, unable to use her magical powers (Agatha conjured a “basic protection spell”) or read Agatha’s minds— putting Wanda at a major disadvantage.

As Wanda is tormented and teased, Agatha’s motive is dropped.

She says, “I need you to tell me how you did this [creating the hex],” which sets the rest of the episode in motion.

As Agatha tries to understand Wanda, she makes her relive the past events that lead her to where she is now— but not without the mention of the threat she poses to the young Maximoff-Vision children.

When Wanda refuses to comply, Agatha says, “Oh, did you forget who has your children stashed in their basement?”

It’s time to look at some real reruns

Using a magic spell, the duo is transported to Wanda’s childhood where a young and loud Pietro hounds his parents for speaking in Sovokian and not using TV Night to “practice their English.”

The Maximoff family has an abundance of classic American DVDs showing the covers of television shows like I Love Lucy and Bewitched— our first explainer as to why Wanda forced Westview to live through the sitcom decades.

Agatha tells adult Wanda, “that’s your cue,” and she is transformed into her younger self.

As a child, Wanda picks an episode of the Dick Van Dyke Show, which she announces to be her favourite.

It shows the TV couple waking up in separate beds and bickering, much like the second episode of WandaVision when Wanda and Vision are awakened by the sound of a storm.

As the wholesome Maximoff family is lovingly gathered around the television, an explosion goes off (Stark Industries, of course), leaving her and her brother orphaned and trapped underneath the livingroom couch.

Wanda says, “At the end of each episode, you realize it was all a bad dream. None of it was real,” as a bomb in the living room continues to beep.

Back in her adult form, Agatha asks Wanda if she used a probability hex to keep the bomb from going off but Wanda replies, “It was just defective.”

Unpleased with the answer, Agatha makes her continue to relive the events of her life.

She assures her, “The only way forward is back.”

Through this, the audience is given a front-row seat to all of Wanda’s traumas and grief; from being a test subject at a HYDRA base to her involvement with the Avengers.

During these scenes, Elizabeth Olsen delivered back-to-back impressive performances, many are calling her a shoo-in for the next Primetime Emmy’s ceremony.

The theme of sitcoms continues.

At the HYDRA base, Wanda is in contact with the Mind Stone and directed to touch it— as a form of experimentation.

She is left in a state of trance after seeing a bright yellow light and the silhouette of what appears to be the Scarlet Witch.

While she’s in recovery from this event, she sits in a dark corner and watches The Brady Bunch alone.

Agatha insinuates that Wanda recovered her powers from the Infinity Stone and then transports them to the Avengers Compound where Wanda is grieving the loss of her brother, after the events of Avengers: Age of Ultron.

During this scene, Vision comforts Wanda as she is, yet again, watching another sitcom.

Giving more insight into the comforting nature of sitcoms, she explains to Vision that even with the show’s oftentimes violent gags, nobody truly gets hurt.

Breaking down, Wanda describes her grief and says, “I’m tired. It’s like this wave washing over me, again and again. It knocks me down and when I try to stand up, it just comes for me again.”

She finishes her monologue with, “It’s just going to drown me.”

Vision offers insight and says, “It can’t all be sorrow can it?” and delivers his aforementioned applauded line.

Lighting the mood, he laughs at an event on-screen, causing Wanda to also offer a few giggles as they look at each other lovingly.

Other important happenings in WandaVision Episode 8

Vision’s Body: Past Wanda showed up at the S.W.O.R.D. office, demanding to see his body and she mentions that he deserves a funeral, as this takes place post-Avengers: Endgame.

She says, “When I came back [presumably from the snap] he was gone.”

Director Hayward takes her into a room where she watches Vision get dismantled under the guise of “he’s a powerful weapon, we have to destroy him.”

Hayward tells her, “He isn’t yours” and she reacts violently, breaking the glass separating her from Vision and approaching his body.

She lays her powered hands on his head and whispers, “I can’t feel you.”

They had a plan: Wanda finds herself at a barren location inside the real Westview where Vision had previously bought them a plot of land for them to retire to.

Here we see the true lives of the Westview civilians that she has had under her control.

This scene is terribly sad and moving, Wanda walks to the plot of land, holding a piece of paper.

She opens it to reveal a property deed and a message left from Vision that circles the land in a heart which reads “to grow old in,” Wanda breaks down crying at the location, falling to her knees.

In her grief, she is overcome with emotions and the transformation into the fictional world of Westview occurs.

This transports us to an entity of Vision, constructed by Wanda, and the 1950s black and white background that the show began with.

Awkwardly enough, as the scene passed, I couldn’t help but wonder when the two had the time to purchase a property deed.

This launched me into an unnecessary search into how to buy a house and it was revealed that to legally require a deed often requires filing paperwork with the state and a series of notaries and legal documents.

Since both Wanda and Vision’s names both appear on the deed, it raises a lot of questions.

The two bonded after the events of Age of Ultron which leaves Captain America: Civil War and the beginning of Avengers: Infinity War as a time for them to go house hunting.

However, at the beginning of Civil War, Wanda is labelled as a deadly weapon and by the movie’s halfway point, she’s an official fugitive— a title which lasts up until a quarter of the way through Infinity War (where Vision tells her that he’d go on the run with her and the other “war criminals”).

If you’re not following: A fugitive wouldn’t be legally able to sign the deed to a house, leaving the two with little time to acquire a property.

But I suppose that should be the least of my inquisition as also, who lets an android own property?

How does WandaVision end?

Much like the previous episodes, it ends with a major cliffhanger.

Back in Wanda’s Westview, she follows the screams of her sons, Billy and Tommy.

She finds them in the middle of the street, being held at the throats by Agatha’s powers.

Agatha says, “I know what you are…. This is chaos magic, Wanda. That makes you the Scarlet Witch” — officially giving Wanda the superhero title we’ve been calling her all along. 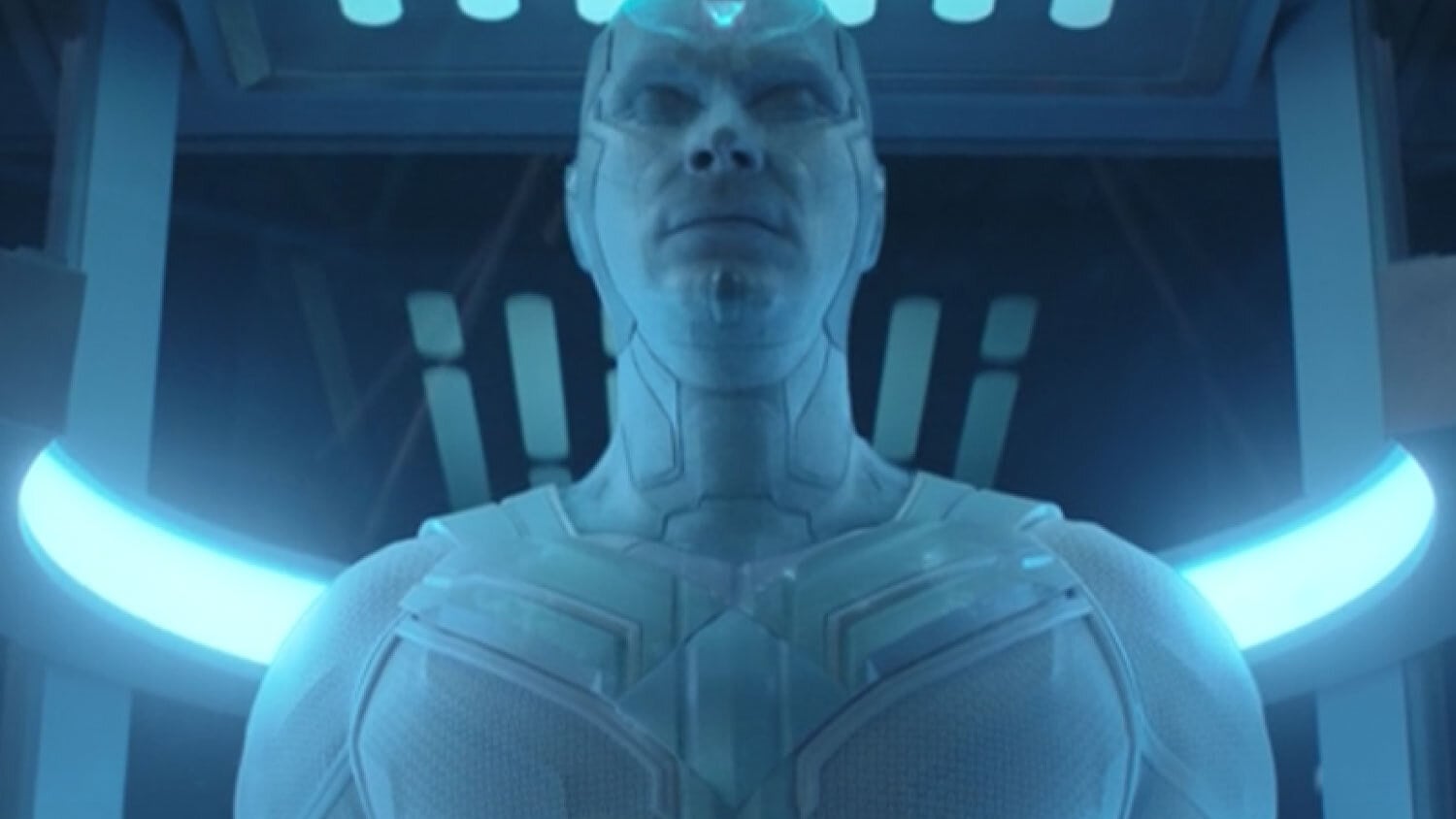 Read more: The First Trailer For Rian Johnson’s Film Knives Out Has Landed And It Boasts An Insane Cast

This week’s episode featured no silly commercial, reasonably as it wouldn’t have matched the vibes of the powerful episode, but it did deliver an epic mid-credits scene.

Back in the S.W.O.R.D. office, Hayward is shown rebuilding Vision and switching him back online, using the energy Wanda gave off during her meltdown in the office.

Vision is shown in a white form which many people are referring to as White Vision.

What comes next in WandaVision?

There’s one episode left of WandaVision, yet so many questions remain.

Who is this guest star that Paul Bettany keeps hinting at, and additionally, didn’t he mention something about the series having a high-caliber action scene?

One of my foolish hopes is that the special guest is Bettany himself and the action scene is Wanda’s Vision vs. White Vision, but honestly, who knows? …Other than the creators themselves who have done a good job staying silent.

Will there be any X-Men involvement or was Evan Peters just a gag?

How about Doctor Strange?

Will Benny be making an appearance?

Episode 8 clocked in at 46 minutes, will Episode 9 be longer?

All is expected to be revealed in this week’s episode, premiering on March 5.

Be sure to tune in at the end of each week for our recaps on the new episodes.