The Falcon And The Winter Soldier Episode 5 Spoiler Review

The Falcon And The Winter Soldier is turning out to be one of the most thought-provoking things that has ever come out of Marvel Studios, and Episode 5, called Truth really demonstrates that fact.

Before we continue with this review, I’d just like to warn you all that there are SPOILERS for Episode 5 coming.

WARNING: SPOILERS FOR THE FALCON AND THE WINTER SOLDIER EPISODE 5 IN THIS REVIEW

I think I’ve said it here before, before up until this point I wasn’t being wowed by The Falcon And The Winter Soldier.

Apart from the first episode, I thought that up until Episode 4 at least, the show had been just trundling along slightly.

I didn’t – and still don’t – really care all that much about knowing who the Power Broker is.

I like the concept of the Flag Smashers and I think that Erin Kellyman has been doing a stellar job as Karli Morgenthau, the leader of this anti-patriotism group.

However, I just felt like the show didn’t really do them justice.

I also can’t help but feel like we’ve had a slightly anemic version of the Flag Smashers and I wonder whether the fact that Marvel had to drastically change the show’s storyline due to the pandemic is to blame.

It was revealed that originally the show was going to have a virus plotline that was going to be tied to the Flag Smashers.

However, the pandemic hit and Marvel opted to change that for obvious reasons.

Don’t get me wrong, I think their cause is a noble one and many of the best villains fight for causes you could actually believe in.

That said, I just think that they’ve suffered a bit in the reshoots and that’s such a shame.

One thing that hasn’t suffered is Sam and Bucky’s relationship, and I do believe that this is the linchpin of this episode in particular.

We see Sam and Bucky start to actually get along as they allow each other to enter parts of their lives they had kept secret from each other.

It’s genuinely joyous to watch the two of them become friends in this episode and fix a boat together.

Sam and Bucky are becoming closer

It takes a community and a friendship to fix a boat, and this episode shows that as Sam enlists the help of family friends to help fix his dad’s broken boat.

Bucky then comes along to give a helping arm and I loved the moment he starting hitting on Sam’s sister.

The other thing that I really loved in this episode was the fight between Sam, Bucky and Wyatt Russell’s John Walker.

I was kind of thinking that Walker was going to become the show’s main villain, and he gets close to it in this fight.

It’s a brilliantly choreographed fight sequence and could have very easily turned into something you see on a DC Comics The CW TV series, but it didn’t.

One thing I wasn’t so enamoured with in this episode was the supposed cameo. 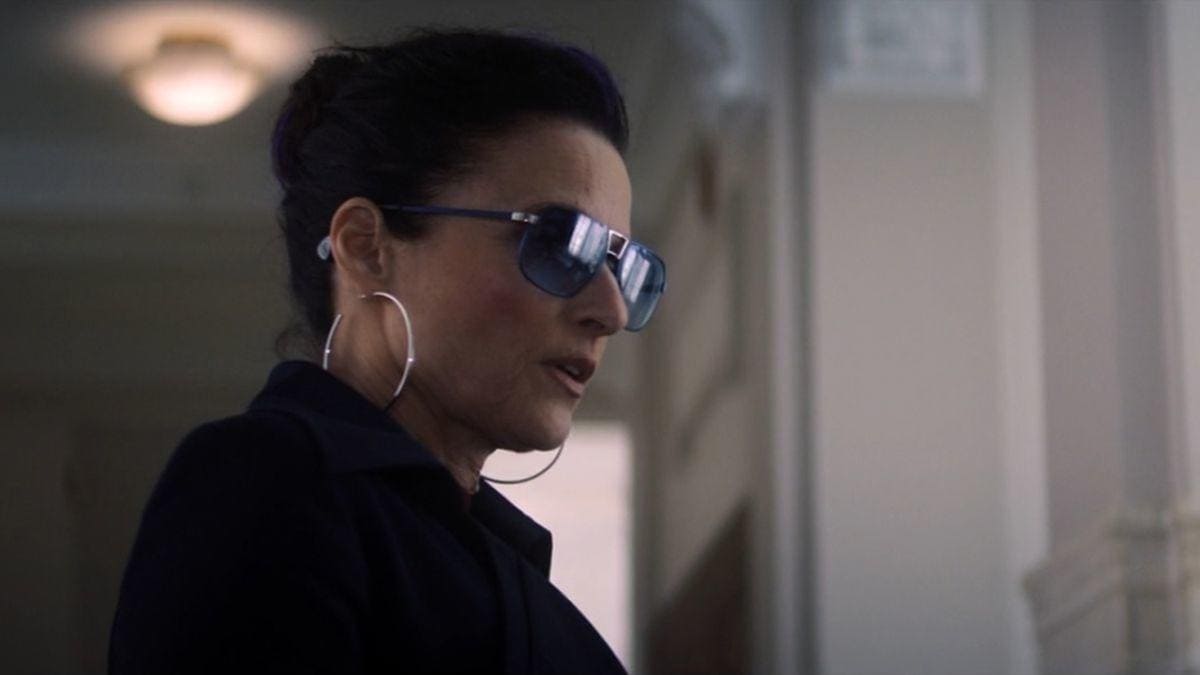 So, what was this “cameo” all about?

Well, it happens after John Walker is stripped of his title of Captain America.

Afterwards, he is approached by a rather shady individual called Contessa Valentina Allegra de Fontaine (but you can just call her ‘Val’, but don’t…).

She is played by the iconic actress Julia Louis-Dreyfus, and being a huge Veep and Seinfeld fan, I was like “YES”.

That said, this is not a cameo.

This is an introduction of a new character in the MCU.

I’m pretty sure she’s going to have something to do with the much-rumoured Thunderbolts and she’ll enlist Walker as US Agent.

I love seeing Louis-Dreyfus really camp it up in the MCU with a purple streak in her hair.

It’s cool, however, it’s not a cameo, so people involved need to really stop bugging up cameos in these shows.

It just gets people annoyed, and rightly so to be honest.

Daniel Brühl as Zemo is to die for!

Read more: First Look At Baron Zemo In His Mask In The Falcon And The Winter Soldier On Disney Plus

Finally, I can’t really talk about this episode without mentioning the brilliant performance of Daniel Brühl as Baron Zemo.

There’s a brilliant scene between him and Sebastian Stan’s Bucky in which Zemo is pretty certain he’s going to shoot him.

You see him go through all the emotions in a few seconds: shock, fear, understanding and acceptance.

And then, shock again and amusement when Bucky shoots the gun and no bullet come out.

Bucky then opens his hand which is full of bullets and he lets them fall to the floor.

I genuinely think that this is an iconic moment and Brühl’s acting makes it so.

So, to cut a long review short, I really liked this episode of The Falcon And The Winter Soldier.

Bring on the finale!

What did you make of this review?