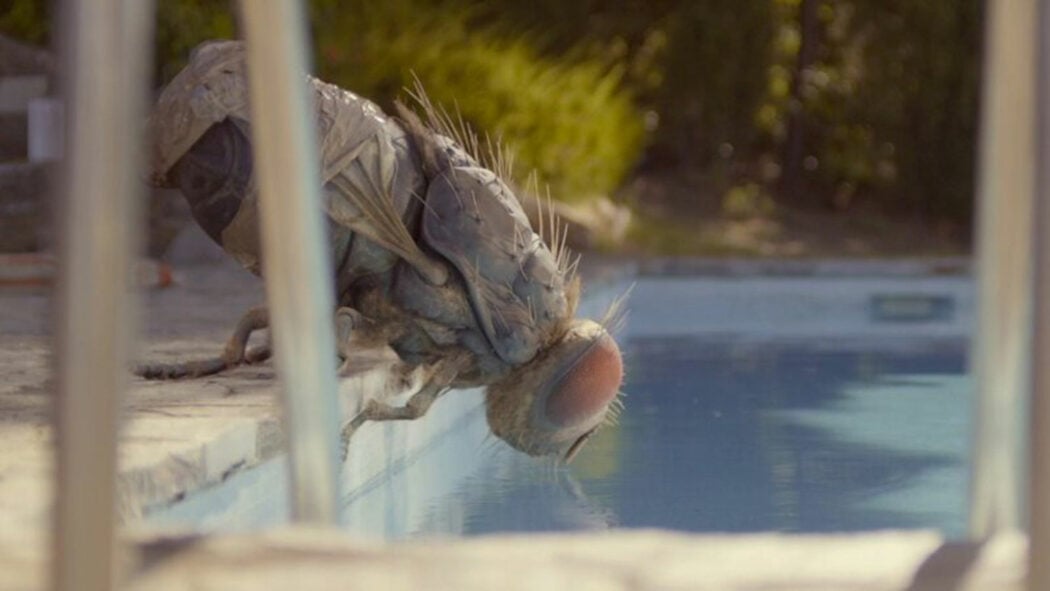 Two friends discover a giant fly trapped in the boot of a stolen car – no it’s not the headline of a clickbait article, but instead the plot of the latest film from French director Quentin Dupieux, Mandibles.

Dupieux’s previous films include such titles as Rubber, which is about a tire that comes to life and goes on a killing spree, and Deerskin in which a man has a dangerous obsession with his designer jacket – so for those not already familiar with his work this is somewhat of an insight into the type of stories he likes to tell.

Starring Grégoire Ludig and David Marsais as two friends, Manu and Jean-Gab, the film tells their story of discovering an oversized insect and attempting to train it with the hopes of it being able to quite literally bring them good fortune. 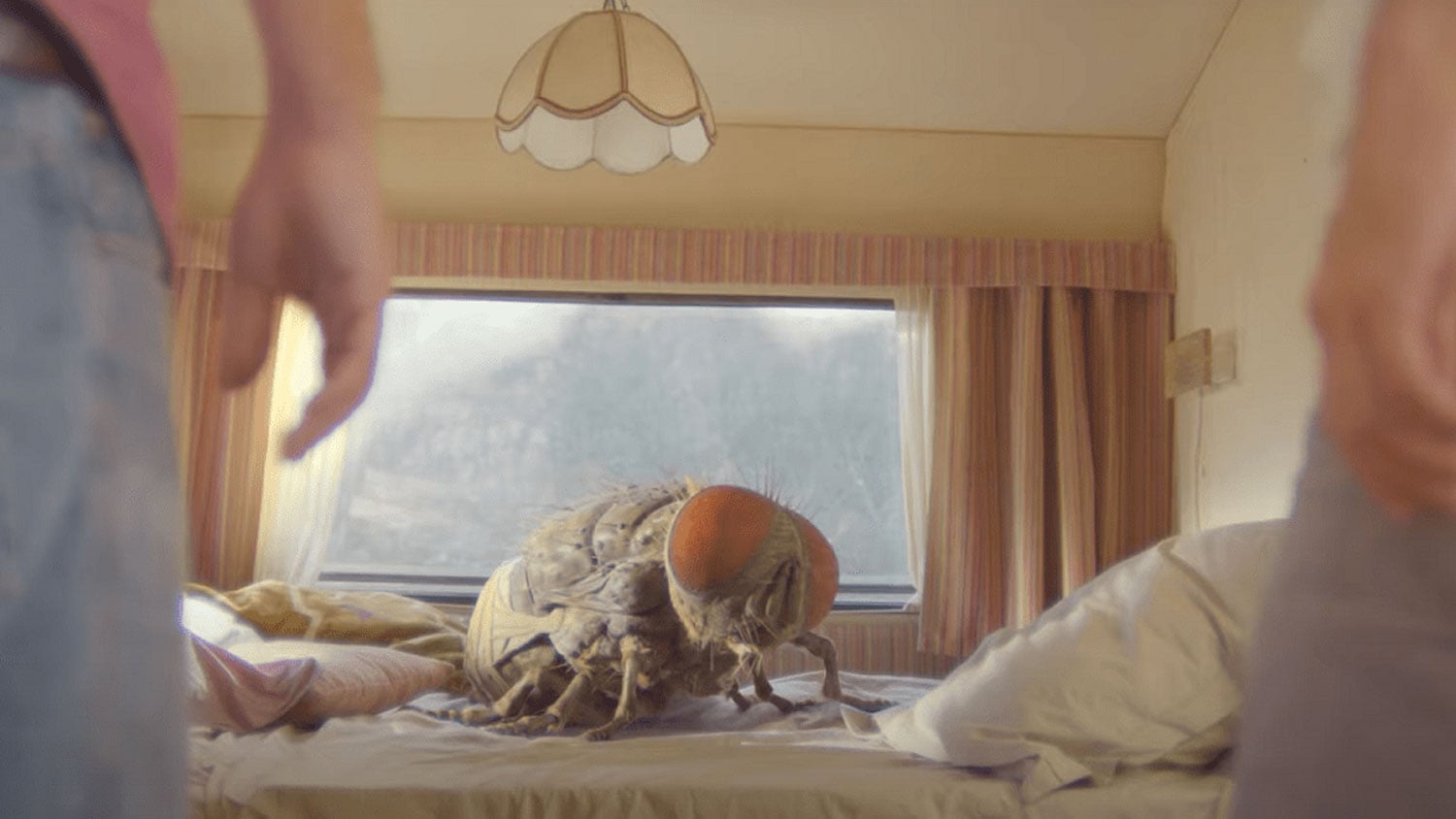 The film opens accompanied by Metronomy’s playful score, establishing the tone of the movie and instantly setting the scene for the narrative that begins to unfold shortly after, not wasting any of the film’s very short running time.

We first meet Manu (Ludig) lying on a beach having previously slept there the night before, he’s woken by another man who has a job opportunity for him, asking him to pick up a briefcase and bring it back to him for a generous cash reward.

Manu steals a car and goes to pick up his friend, Jean-Gab (Marsais) to come along for the ride, however, it isn’t long before they realise that the stolen car isn’t empty and they stop to discover the humongous fly nestled in the boot!

Upon finding the fly the pair abandon their original mission and begin to attempt training the enormous insect, with varying degrees of success.

So if it wasn’t already abundantly clear from the somewhat far-fetched synopsis, Mandibles is an incredibly silly film and it’s best not to take it too seriously.

However, in saying that it is refreshing to see that the effects department has put great effort into the creation of the fly, the practical effects are welcome to help bring the most basic level of plausibility to this tale of very silly proportions.

The fly looks the part and makes the whole narrative a lot easier to get on board with than if it didn’t, the strong design of this intrinsic element to the plot is one of the reasons why the film as a whole is a success.

The Performances Sell the Silly 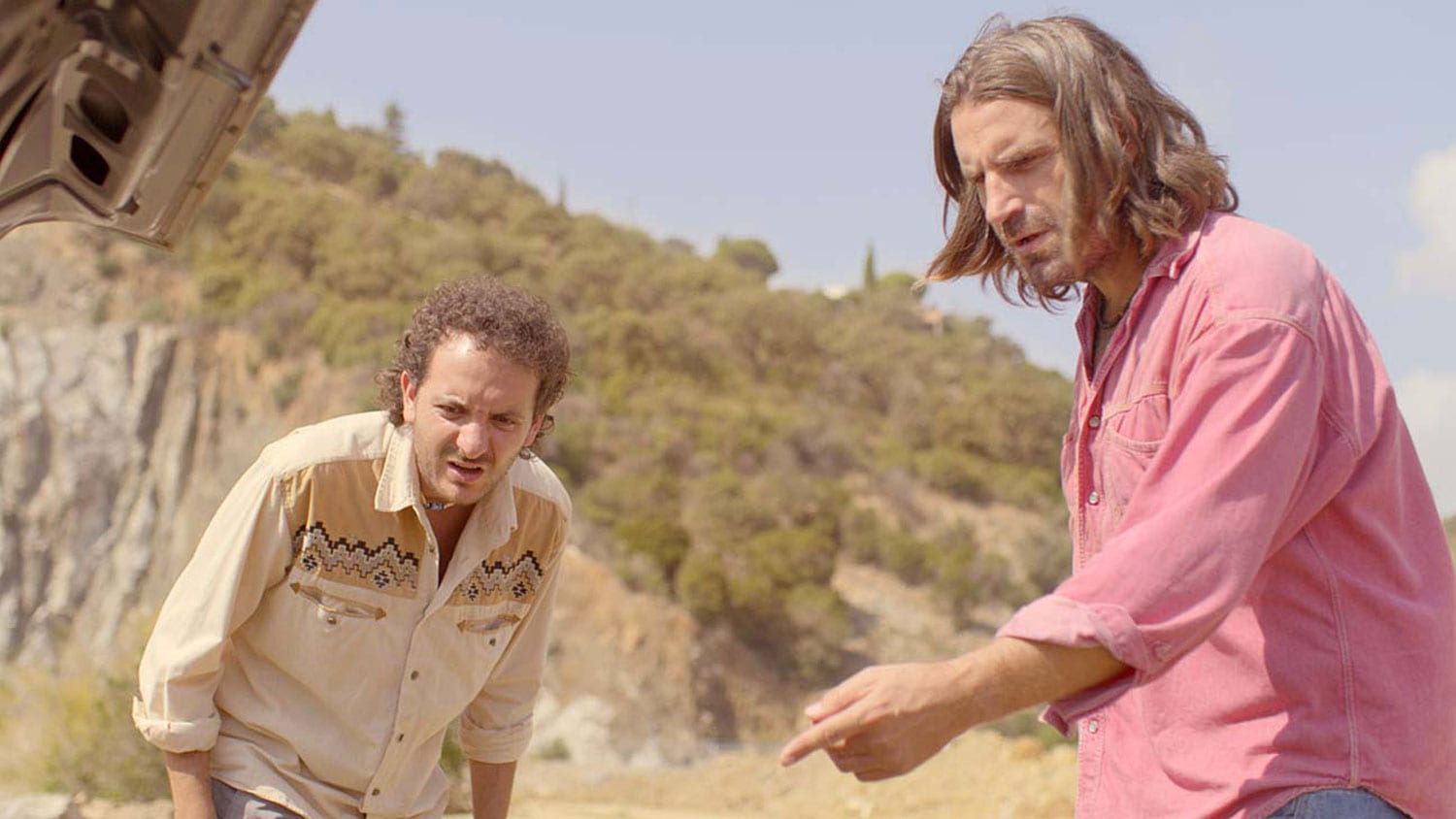 Admittedly the film is rather one-note, alternatively, you could just say that it’s consistent in its tone.

No doubt this will most likely vary on your tolerance for all the silliness, however, it has a level of intrigue to it that never falters thanks to the overall absurdness of the comedy.

This of course is made possible by the two leading performances from Ludig and Marsais who maintain their characters’ dim-witted personas throughout, managing to infuse just enough charm to prevent them from ever becoming irritating.

However, despite their well-measured approach, Dupieux cleverly introduces a fresh batch of characters around the halfway mark allowing for more varied chemistry and the potential for further comedy.

This is exactly what the film needs to keep things interesting and the new characters are introduced just at the right moment, helping to avoid any pacing issues that some of his previous films have suffered from.

Ultimately Mandibles is a ridiculous and whimsical endeavour that will see audiences polarised in their reactions, either taking to the wonderful silliness of it all or feeling alienated from the absurdity on show.

It’s certainly one of Dupieux’s more accessible and easy to follow films, in that it doesn’t require a lot of effort from audiences to unpack the narrative, although if unable to connect with the comedy there might not be a lot here for some viewers.

However it moves along at a pleasant pace and includes its amusing and comical offerings at regular intervals, and it has the potential to be the Dupieux film with the widest audience appeal.

So whilst Mandibles isn’t necessarily set to completely fly away with audience acclaim this bizarre comedy does do enough to create ample buzz thanks to Dupieux’s silly, yet straightforward storytelling.