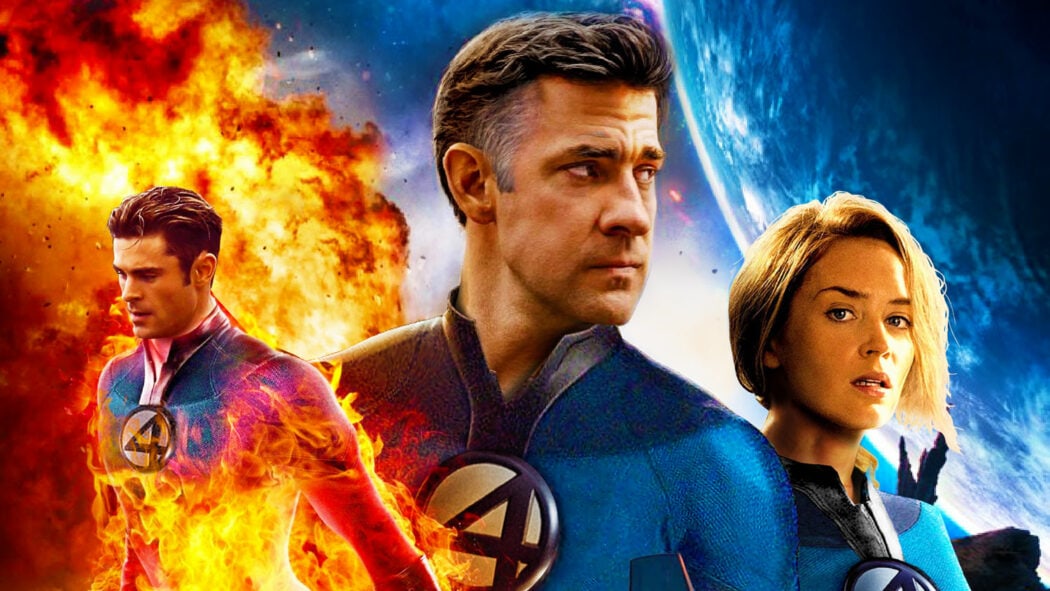 It seems as though Disney and Marvel are starting to use people’s fan posters in their Disney Plus user surveys as they used a Fantastic Four fan poster which includes John Krasinski and Emily Blunt as Mr Fantastic and The Invisible Woman respectively.

There are so many fans out there who are desperate to see the two of them in those roles in the upcoming Fantastic Four MCU movie.

This is after we were treated to John Krasinski as Reed Richards (aka Mr Fantastic) in Doctor Strange 2.

He appeared in a brief cameo in the movie and people are now pretty certain that Krasinski will get to play the role in the standalone MCU Fantastic Four movie.

A new Disney Plus poll is now getting those Krasinski and Blunt casting rumours to the next level.

A survey sent out to a number of Disney Plus customers about upcoming MCU projects is reportedly using a fan-made Fantastic Four poster featuring Krasinski and Blunt.

This was revealed by CinemaBlend managing editor Sean O’Connell who shared a screenshot of a survey that was sent by an outside company about Disney Plus’ MCU projects.

The survey, (apparently sent out on an “invite-only” basis), features a Fantastic Four poster which was actually a fan poster created by Mitch Letcher.

If you want to check out the full fan poster, then you’ll be able to see that it features Zac Effron as Johnny Storm and Liev Schreiber as Benjamin Grimm.

File this under “Strange.”

An outside survey company polling Disney+ patrons regarding upcoming projects used John Krasinski and Emily Blunt for the Fantastic Four. Reed is even shaven, in a tweaked suit, with grey hair at his temples.

Wishful thinking? Or something more? pic.twitter.com/iyBk4X8Quh

READ MORE: Why Marvel Has To Cast John Krasinski And Emily Blunt In Their Fantastic Four Movie

To put a little bit of scorn on this story, some people in the comments of the tweet above pointed out that other fan art for upcoming projects were used in this survey.

So, it sounds to me as though the company tasked with making this survey just did a Google search and then pasted in any old image they found which seemed relatively official.

Anyway, since Doctor Strange 2 was released, there’s been a new rumour making the rounds on the Internet that suggests Krasinski wasn’t the first choice for Reed Richards in the latest MCU movie.

It’s been reported that James Bond alum Daniel Craig was originally set for the role but bowed out as cases of COVID began to rise.

Moreover, the movie’s writer, Michael Waldron shared with ComicBook.com that fans’ requests were never really part of the conversation when they were coming up with casting choices for The Illuminati in the movie.

Could John Krasinski and Emily Blunt be in the MCU’s Fantastic Four movie?

He added that Krasinski’s name came up naturally.

You can watch John Krasinski as Reed Richards in Doctor Strange 2 which is currently in cinemas.

Are you hopeful that John Krasinski and Emily Blunt will be cast in the MCU Fantastic Four movie?