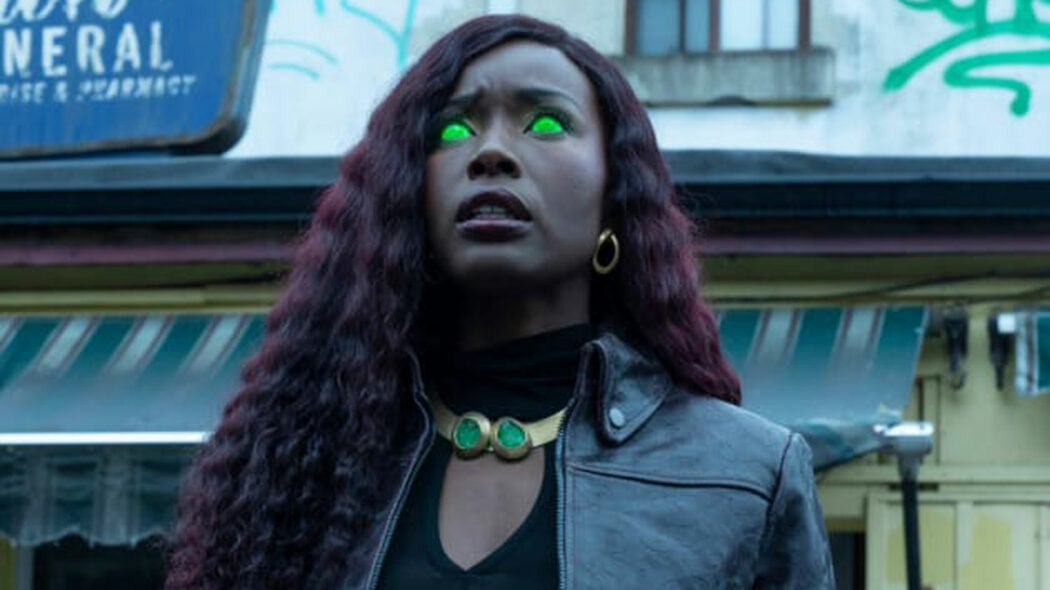 Wow! What an episode of Titans Season 3, I definitely didn’t see any of this coming.

This was an intense episode that throw in some curveballs that I didn’t expect.

This episode focuses on Jason and he is finally seeing the error in his ways.

Also, Crane has gone off the rails and we see the true dark side to this character, with some fabulous performances from Vincent Kartheiser.

We finally get to see Tim and get to spend a little time with him and discover why he is seen as the next Robin.

TIM FINALLY TAKES CENTRE STAGE BUT IS HIS TIME UP ALREADY?

This episode of Titans Season 3 leaves us on a huge cliff-hanger and a lot happens throughout that I’m not sure where to start.

I am super happy that Tim (Jay Lycurgo) has finally made a proper appearance and is making his mark.

I feel like Jay Lycurgo is just perfect in this role; he makes Tim’s passion for Batman and Robin feel really real.

Also, let’s not forget that Tim is extremely intelligent as he figured everyone’s identity out.

Tim is supposed to be the next Robin, if the season follows the comics, but what happens at the end of this episode makes you question if they are.

Tim has been slowly drip-fed into the season and it does feel like the right timing to bring him centre stage.

I do hope we get to see more of Lycurgo, and that he has a meaning and an active role in the final few episodes that are left of this third season.

ALL JASON WANTS IS TO GO HOME BUT DOES HE HAVE A HOME LEFT TO GO TO?

It’s taken a while, but has Jason (Curran Walters) finally come to his senses or does he feel that it just isn’t going to end well if he stays with Crane (Vincent Kartheiser).

Things have been going from bad to worse with Crane and now that he is out of fear gas Jason seems desperate.

Jason is coming across as a very lost character, which he is, and he just wants to go home to his family.

The issue is he has done a lot bad stuff, which can’t be easily forgotten.

I do wonder if Jason can really go back to being a Titan.

I do think Jason can be a good guy but he has had to deal with a lot of suffering that would cause most people to lose control.

It was interesting that Jason disappeared at the end of the episode, I thought he may help Tim but instead, he ran.

I’m curious to know where has he gone, but my gut reaction is maybe he’s gone to Molly or could he go in search of Bruce?

I liked that Gar (Ryan Potter) went to Molly for help and then even persuaded the Titans to give Jason a chance.

Once again, I feel like an opportunity has been missed for Gar to have his own moment.

On the quiet, Gar comes up with some quite good plans which mostly work well, yet I feel like everyone else gets the praise.

I really want Gar to have his own storyline or even just an episode where we follow him that has some meaning.

Even Superboy is now getting a bit of a storyline, while Gar is still just in the background.

I understand it’s difficult with such a large cast to give everyone screen time but I feel like Potter deserves more.

He puts on a good performance every episode and we just don’t see enough of him.

Starfire (Anna Diop) has received a new vision, which came from nowhere.

At the moment it has something to do with a baby that could be Starfire and she is in a theatre.

As there aren’t many episodes left, we can assume we’ll find out what these visions mean soon enough.

However, if we were to guess could it have something to do with Blackfire?

At this moment we don’t know, but it means we have something exciting to look forward to.

I have to say I think Diop puts on good performances in this show but at times I find her character very one dimensional.

I feel like Starfire wants to lead the group but she doesn’t and she doesn’t really think she should/can.

It all feels like action first and thought after.

This makes for interesting watching but at other times I wish there was a really emotional side to this character that we could witness, just to mix it up.

VINCENT KARTHEISER STOLE THE SHOW. BEST PERFORMANCE OF THE EPISODE AND SERIES SO FAR 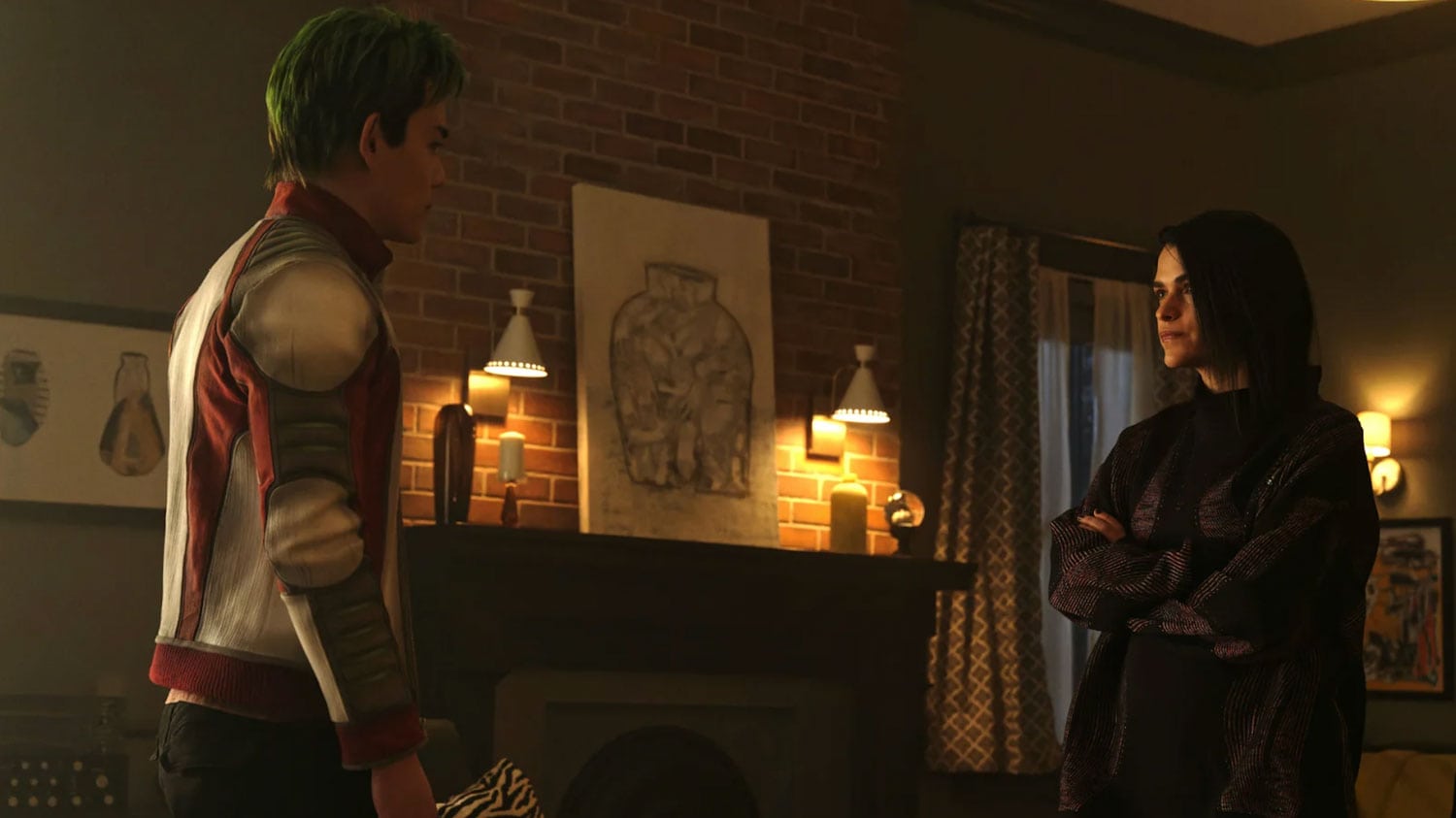 Romance is in the air, with Dick (Brenton Thwaites) and Barbara (Savannah Welch) and not too surprisingly Connor/Superboy (Joshua Orpin) and Blackfire (Damaris Lewis).

I have to say Blackfire and Connor getting together happened a lot quicker than I thought it would.

We all saw the flirting in the previous episode but I didn’t expect it to happen so quickly.

Both feel like outsiders and the bad ones (Connor thinks he could be evil only because his Lex side).

I like the dynamic between Orpin and Lewis, this be a great pairing and team.

I do wonder if one went bad would the other follow or would there just be heartbreak?

Crane goes crazy in this episode; he kills two people and pulls off a brilliant plan to infect all of Gotham’s water supply.

This was a really strong episode for Vincent Kartheiser and he did brilliantly.

My favourite scene of his is in his mother’s office. He goes from scared child to anger in a second and it works so well.

I felt scared of Crane in that moment and wasn’t sure what he was going to do to his mother.

Just a fabulous performance from Kartheiser and he really showed us what he could do and showed us the mental side of Crane.

The best part of the episode was the scene between Crane and his mother.

EPISODE 8 LEAVES US ON A HUGE CLIFFHANGER AS THE TITAN SIGNAL TURNS RED!

We leave this episode on a huge cliff-hanger; the water of Gotham has been tampered with and chaos could begin any second.

While our next robin could be dying in Gar’s arms.

Alongside this not only is Starfire getting visions again but Dick now getting hallucinations of his own.

What they all mean we aren’t sure yet.

However, the main purpose of this episode is to show us that Jason wants to come home but no one can trust him.

I’m excited to see how the water will affect Gotham in the next episode and if the Titans can stop it.

Watching the Titan signal turn red felt like an Easter egg that lots of blood is going to be shed in the next episode.

This episode was a lot but it was much better than I expected.

As we are reaching the final few episodes, expectations are slowly growing as you want a spectacular and sitting on the edge of your seat finale.

A lot happened in this episode and some much better performances too.

I’m eager to see what will happen next.