When it was revealed that James Gunn was going to be making The Suicide Squad for Warner Bros. Pictures and DC Films, naturally I was left scratching my head in confusion.

Was this film going to be a reboot, a sequel or a prequel to David Ayer’s movie?

Well, the answer lies somewhere in between and I think it’s all the better for it.

There were a lot of issues with 2016’s Suicide Squad. Issues that I won’t go into here.

But, I will say #ReleaseTheAyerCut and leave it at that.

The main thing I kept on thinking whilst watching The Suicide Squad was, “this really is ‘un film de James Gunn'”.

Oh, and by the way, there are going to be some SPOILERS for The Suicide Squad in this review.

Gunn has made a name for himself for his rather unique sense of humour and love of gore and violence.

He likes his films to be shocking, loud, proud, fun and doesn’t really care if he offends people in the process.

If you look at the movies he made before the Guardians Of The Galaxy films, that was what he was all about.

Films like Super (which I really don’t care for) and Slither (which I love).

They are the types of movies that he liked to make.

However, he was somewhat muzzled with the Marvel movies he made.

They still had that trademark James Gunn style but lacked in the shock factor.

Well, James Gunn’s The Suicide Squad is Gunn unleashed and it’s all the better for it.

It’s a violent, vibrant, shocking r-rated comic book movie, and I think the genre benefits from it.

Read more: When Is The Suicide Squad Coming Out In The UK?

Before The Suicide Squad, if you were to think of R-rated comic book movies, then Deadpool would come to mind.

However, and here comes an unpopular opinion, I think the Deadpool movies aren’t that brilliant.

They’re R-rated but didn’t really take advantage of that.

Well, Gunn took every advantage he could and more.

From the very beginning, the movie is constantly reminding you that this is an R-rated film.

The gore, the violence, the language. It’s unlike anything you’ve seen and heard in a comic book film.

The movie opens up with a war-like sequence that isn’t afraid to show you as much blood, guts and gore as it can.

The movie never really lets up from that point on.

There are a whole host of brilliantly gory fight sequences.

You can tell that the movie is really revelling in its own violence, and that’s how a Suicide Squad movie should be.

I also really liked the fact that the whole film is basically one mission and takes place in one location.

The whole film (apart from the Amanda Waller scenes and some flashback sequences) takes place on an island called Corto Maltese.

It’s like some kind of Suicide Squad… but good

OK, but that’s enough about how much I loved the movie’s violence and also its sense of humour.

[Side note: I will state here that I do understand if people don’t like James Gunn’s sense of humour.

However, I think this is his funniest movie to date.

He makes you feel bad for laughing, but that’s the genius of James Gunn.

He shows you that nothing is off-limits and makes you feel all grubby and nasty for laughing at a rather inappropriate joke.

OK, side note over.]

It’s time to talk about the performances in this film.

Literally everyone is on point in The Suicide Squad, and I would argue that Idris Elba and Margot Robbie have never been better in an action film.

This is easily Robbie’s best performance as Harley Quinn and the movie actually adds a lot to her character.

We’re seeing a very different side to Quinn in this movie, and I can’t wait to see more of her in the future.

Idris Elba’s Bloodsport is actually kind of the movie’s lead, and he leads the troop masterfully.

Time to talk about The Suicide Squad’s cast 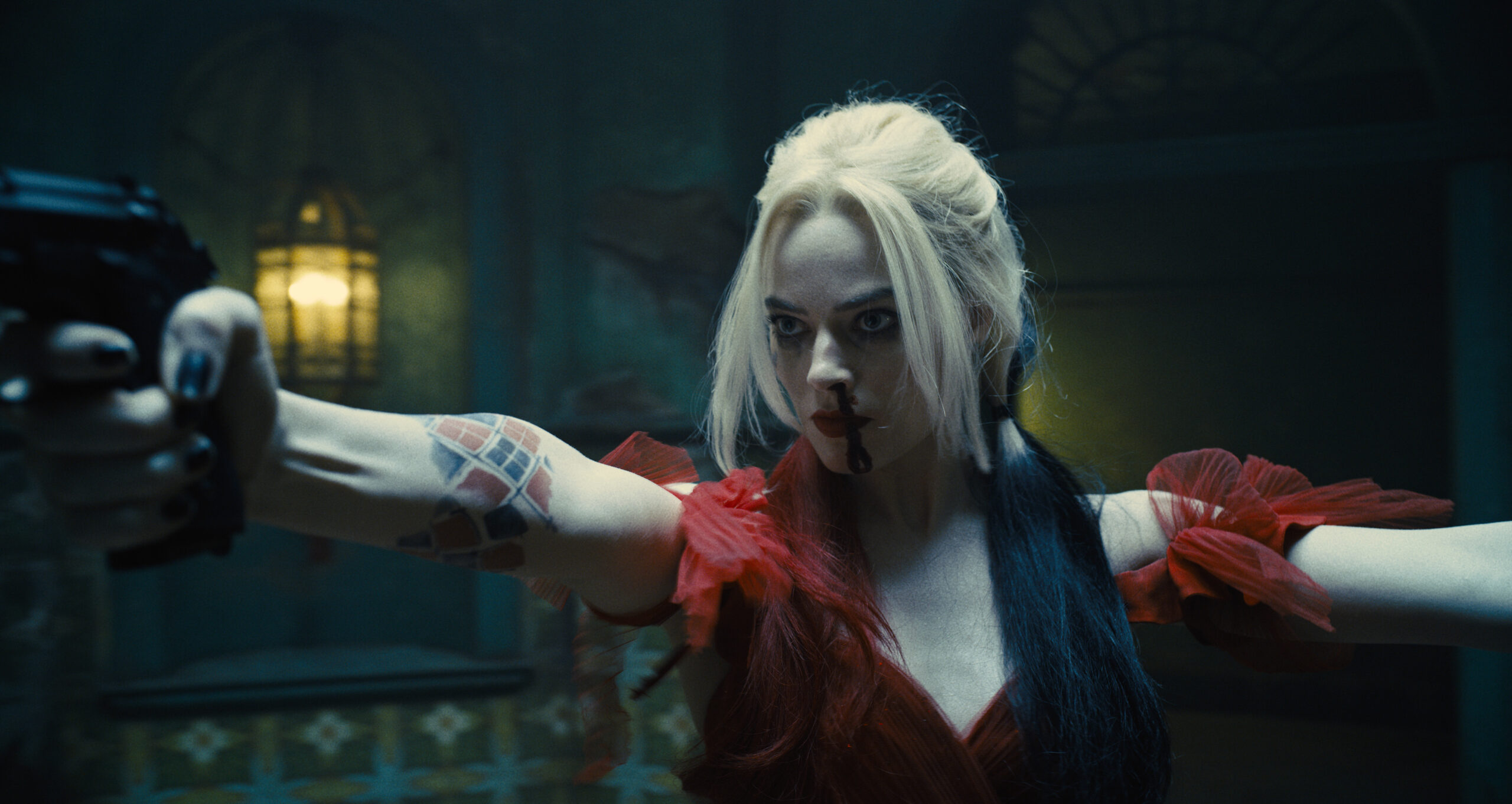 David Dastmalchian is fantastic as Polka-Dot Man, and I think that Daniela Melchior as Ratcatcher 2 is the heart and soul of this movie.

She is just wonderful.

Then there’s Sylvester Stallone as the voice of King Shark.

He steals the show as far as jokes are concerned.

And yes, John Cena is very good as Peacemaker and has some great oneliners – but I will say that I think the trailers ruined his character a bit.

They included the brunt of his one-liners, which was a shame.

However, the scene in which Peacemaker and Bloodsport try to outdo each other with their kills is simply pure brilliance and had me in stitches.

He played the role in the first movie, and he’s just so much better in this film.

His character is also a lot more well-rounded.

Don’t get too attached

James Gunn was often quoted saying that almost every character in this movie will die, and he was right.

So, maybe don’t get too attached to anyone when watching The Suicide Squad.

The thing is, the characters are all so surprisingly well rounded that you won’t be able to stop yourself from getting attached to some of them.

The only criticism as far as the film’s characters are concerned is that I think Peter Capaldi’s The Thinker was done a bit of a disservice.

I would have liked to have seen more of him on-screen, and yes, I’m going to complain about accents again.

Capaldi has a very strong Scottish accent naturally, but he starts off the movie with a rather posh English one.

He ends up finishing the movie reverting back to this beautiful Scottish accent.

I just wonder why they didn’t go with that from the beginning.

We need to talk about Starro

Finally, I can’t do this review of The Suicide Squad without talking about Starro the Conqueror.

The character turns up towards the end and just the utter balls of James Gunn to use such a character.

He clearly relished being given the freedom to use the DC Comics characters he pleased.

Gunn uses so many brilliant yet often maligned characters in this movie, and I think Starro is the best one.

Starro is a supervillain from the comics who’s basically a massif starfish that floats around space and conquers worlds.

Huge kudos to Gunn for using Starro in The Suicide Squad, and he didn’t disappoint.

I can’t help but love this comic book movie and I am so looking forward to seeing what Gunn gets to do next for DC Films.

Have you watched The Suicide Squad yet?

If so, what did you guys make of it?