WARNING: There are SPOILERS for Money Heist Season 5 Part 1 in this article.

The fans were holding back to see what unfurls after season four of Netflix’s Money Heist, which finished in spectacular fashion.

This bit of the season really did satisfy the fans.

I saw that there were many fans online coming up with theories and speculating about what would happen to Tokyo, yet nobody ever thought that it was Úrsula Corberó’s character who would end up kicking the proverbial bucket.

Fans of the show, myself included, were certain that Tokyo will live on until the end of the show, but it wasn’t to be.

Before the fifth season (part 2) comes to Netflix, many fans are now wondering whether her death will end up giving the group enough time to get away from the Bank of Spain with the gold.

After the Money Heist Season 5 Part 1 finished, it occurred to me that her flashbacks about her dead sweetheart, joining the group, the beginning of her romance with Rio (Miguel Herrán) and discussions with her now-dead friend Nairobi were actually hinting at her untimely demise.

At first, I thought that we were only seeing very small snapshots of what really went on in Tokyo’s life and what she really was like as a person.

Maybe Season 5 might have revealed to us via the flashbacks – regardless of whether it be of Berlin (Pedro Alonso), Moscow (Paco Tous) or Nairobi (Alba Flores), what was really going to happen to them.

Interestingly enough, all of these characters ended up dying.

Have Money Heist’s flashbacks been telling us what was going to happen to each character?

The Professor was the one who was beside Tokyo when she died and he seemed to accept her fate.

The two of them had an interesting bond and Tokyo even called him her “guardian angel”.

The character was getting a lot of criticism from the fans because she was impulsive and childish.

Be that as it may, we had the chance to see her passionate side and she developed as the show went on.

I have to say that the way in which they showed Tokyo’s death was first class.

I’m pretty sure I’m right in saying that we were all left open-mouthed as Tokyo was taken out by expert sharpshooters.

Then, at that point, the group was under siege by covert operatives, who were taking their order from the Bank of Spain’s head of security César Gandía (José Manuel Poga).

Easily Money Heist’s most hated character, Arturo Roman (Enrique Arce), can be described at this point as César’s puppet.

He’s the guy who killed Nairobi in Season 4 (still can’t get over that death) and he brags about it constantly.

Well, maybe César has since overtaken Arturo the show’s most hated character, and he takes it to a completely new level in Season 5 Part 1.

He’s not a coward, like Arturo, and obviously takes great pleasure out of harming individuals and does it with a smile on his face.

I think the moment that made César one of pop culture’s most iconic villains was when Tokyo was lying on the floor – bleeding out after having been shot.

César walks over to her, points his gun at her head, preparing to kill her once and for all.

However, his smile immediately vanishes when he realises what Tokyo has done.

She’s smiling up at him and opens her closed hand, revealing the grenade pins she’s just taken out.

He then screams at his team to get back, but it’s too late, and they all die in a fiery explosion.

Well, I’m pretty sure there won’t be any fans theorising that Tokyo’s still alive because no one could survive such an explosion.

There’s no way Tokyo could survive such a blast – right? 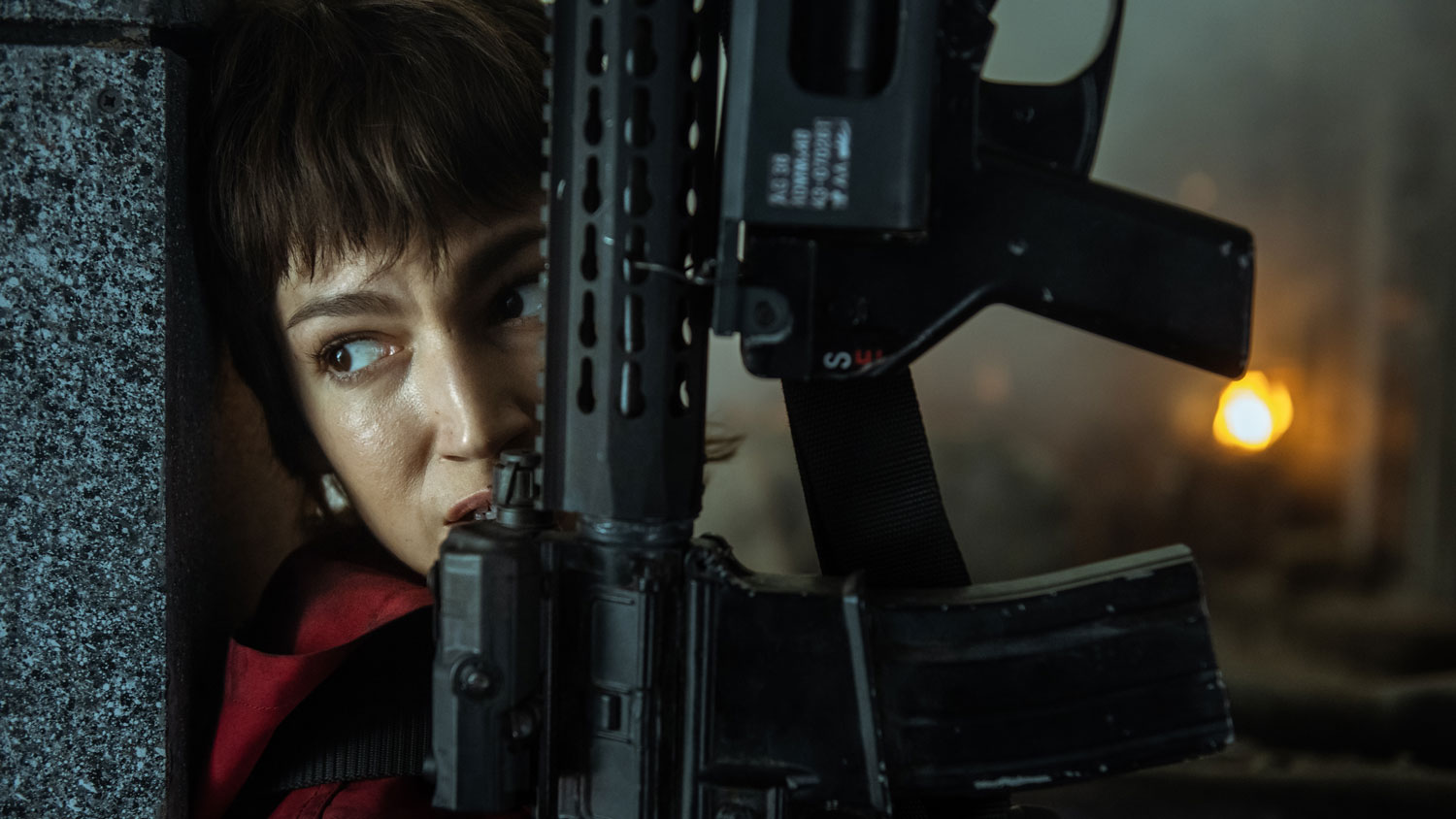 This was just yet another scene that left Money Heist viewers weeping uncontrollably.

There have been many of those over the course of this show’s five seasons.

From Denver (Jamie Lorente) calling Tokyo his sister, Nairobi sharing her way of thinking about loss and friendship, to Tokyo conversing with Manila (Belén Cuesta) about her heartfelt feelings for Denver.

Well, you can get these Money Heist costumes for yourselves and you can also get Money Heist-themed jackets, coats, jerseys and even hoodies.

So, make sure to head on over to the website in the link and get the best deal possible on these awesome costumes and Money Heist-inspired items of clothing.

The website is very highly ranked all over the world so hurry up and don’t waste your time searching other websites for Money Heist paraphernalia.

What could happen in Money Heist Season 5 Part 2?

Anyway, back to Tokyo. There’s the moment when she tells The Professor that he was her guardian angel and that really got the fans weeping and just feeling generally miserable.

Yes, that was a downer, however, there were also some more upbeat moments in the season.

I’m thinking specifically of the moment when Manila finally tells Denver how she really feels and explaining to him that his romance with Stockholm (Esther Acebo) was not genuine love.

That was a pretty impressive moment, but I’m not sure that all Money Heist fans really appreciated it.

Then there’s Arturo. Oh, Arturo. Could you be more of an idiot?

Well, in Season 5, his stupidity levels reach new heists as he tried to kill the whole Money Heist gang along with all the prisoners all because of his little quarrel with Denver.

Thankfully, Stockholm gets back at Arturo, who once against attempted to weasel his way out of his sticky situation – typical Arturo.

She gets to shoot him – yes, Stockholm!

However, it’s unsure what’s going to happen to her from this point on.

She got an earful from Denver when told him that she’s joining the group.

He felt that it was a huge mistake, especially with a baby on the way. He has a point to be honest.

Then there’s Fernando Cayo’s character, Colonel Luis Tomayo, who ends up becoming even more frantic and feature as the season goes on.

He just wants them all dead, no matter the cost, and he’s playing with innocent people’s lives.

Alicia Sierra (Najwa Nimri) might end up being the key to everything in the final season – we’re just going to have to wait and see.

Money Heist Season 5 Part 1 demonstrates that we need to be prepared for the worst.

Tokyo’s death alongside those of Nairobi, Moscow and Oslo (Roberto García Ruiz) are proof of that.

Money Heist Season 5 Part 2 (the end) will be available to stream on Netflix from December 3rd.

What do you make of this rather long feature about Money Heist Season 5 Part 1?