Right, this isn’t really a story I wanted to have to research and write, but I’ve been forced to because of how much traction this rumour’s been getting on the Internet. So, there have been rumours that Robert Pattinson and Zoe Kravitz were reportedly caught having sex on the set of The Batman. There were then rumours that Kravtiz was now pregnant with Robert’s child.

I really wanted to get to the bottom of all this, find out where the rumour came from, and find out whether it was true or not.

This isn’t something I would normally do here on Small Screen.

It’s actually something that I don’t enjoy doing because it’s kind of giving these nonsense rumours even more air time, which they really shouldn’t be getting.

However, it does give me the chance to do a bit of investigative reporting, which is always fun.

So, first off, what was the rumour claiming and where did it come from? Well, it’s not surprising to find out that this rumour came from a post on 4chan, which is not a place I like to go, ever.

The person who shared the post on the imageboard website claimed that they were working on the set of The Batman and that Pattinson and Kravitz were caught having sex on set. 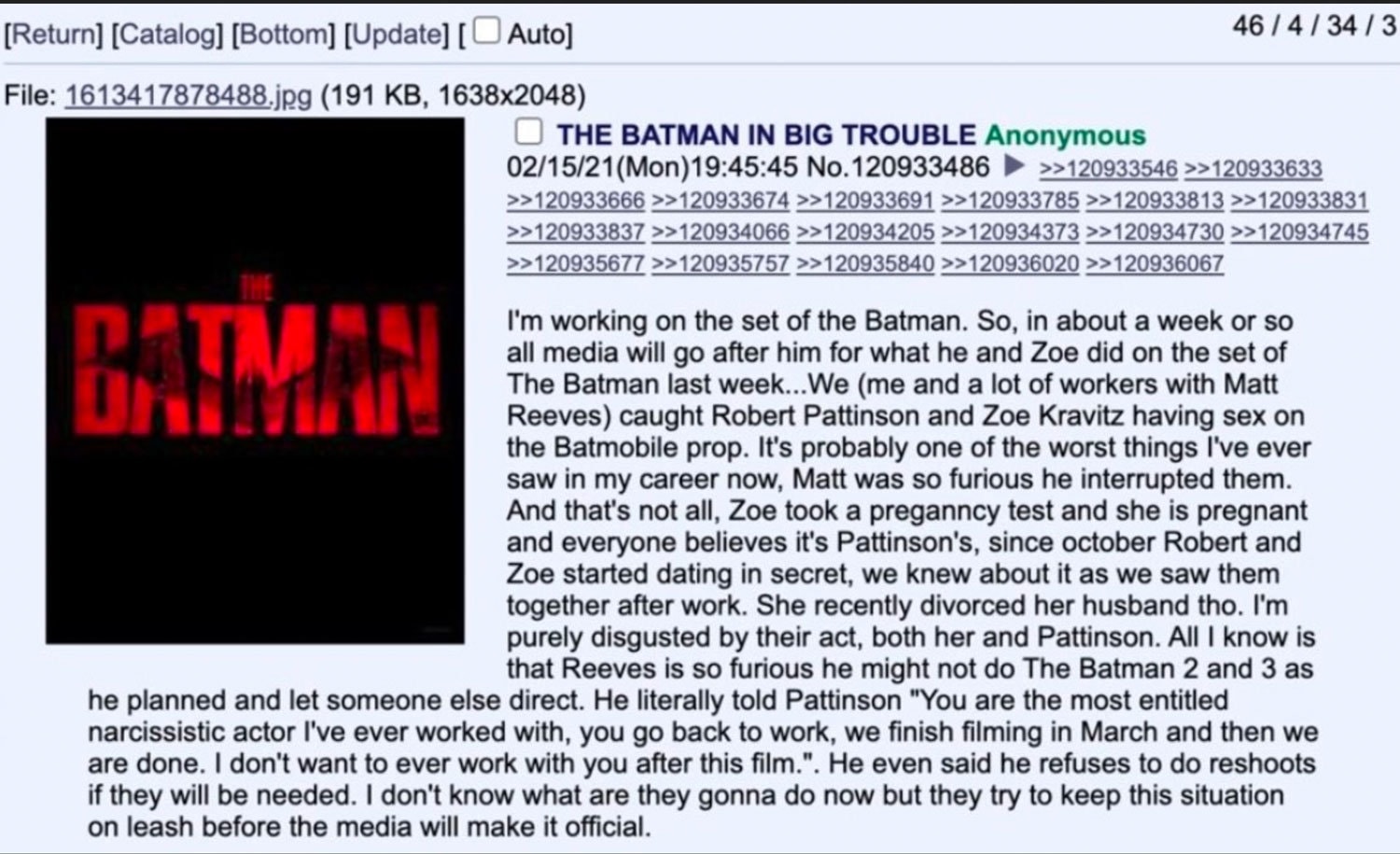 They didn’t stop there though. They also claimed that they were having sex on the Batmobile prop.

OK, so, firstly, this post reads like someone’s sexual fantasy. Secondly, both actors have always been described as being very professional on set.

I’ve actually met Zoe Kravitz. I interviewed her for the Divergent films a few years back and she was lovely.

Thirdly, the fact that this supposed crew member opted to post this information on 4chan makes no sense.

I know a lot of people who work on films – crew members, editors, some visual effects artists – and I’m sure that no one working on a film as big as this, any film for that matter, would ever post anything on 4chan. It’s a website connected to pedophile rings and most recently the whole Qanon conspiracy theory.

No, they would all stay well away from that site. Also, it’s not really the done thing in the industry. You do not share stories of what’s going on on set while it’s still shooting. OK, unless if something really terrible is happening such as sexual assault, bullying… That sort of stuff. This is why I would take all those stories of there being issues on the set of The Batman with a huge fistful of salt.

The Batman rumours are all “utter rubbish”

They’re unsubstantiated claims, and for some reason, a lot of YouTubers out there seem to enjoy spreading these rumours. YouTubers such as Overload DVD (he’s the worst), love to spread and create these sorts of rumours on the Internet.

Right, so I contacted some people whom I know to be working on The Batman project and asked them to clarify whether there was any truth to these rumours.

Before I reveal what they had to say on the matter, I just wanted to make it clear that I did ask these people if they were OK with being directly quoted. Most of them said yes. Here’s what some of them had to say:

This didn’t happen. It’s utter rubbish spread by some guy on the Internet.

No. Do not believe those rumours. All the stuff about there being issues on set are not true. Rob and Zoe were not caught having sex on a bloody Batmobile! Also, no issues between Rob and Matt. They have their differences on certain things, but it’s all creative stuff about the character and they are getting along. 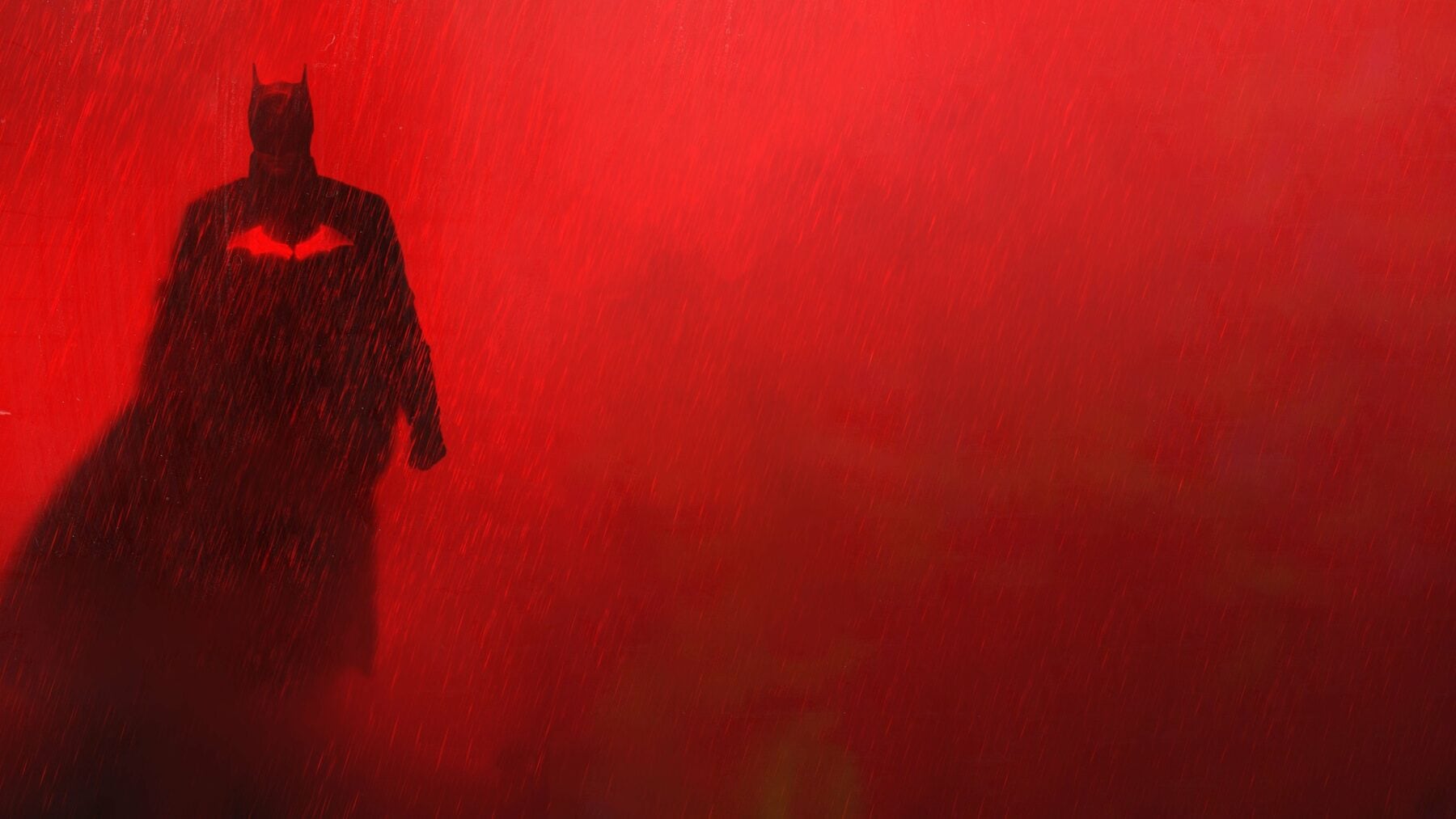 Finally, a person I’ve known since my school days and is now working in the film industry had this to say about all The Batman rumours:

What I can say is that there is no truth to these rumours. Seems like a lot of YouTubers and people on the Internet have something against the film. Don’t know why, but they love making up and spreading these rumours. This Rob and Zoe one is the most inventive yet.

I have to agree with them on that one. This is the most inventive rumour about what’s going on on the set of The Batman I’ve read yet.

What do you make about all these The Batman rumours? Let me know your thoughts in the comments below.