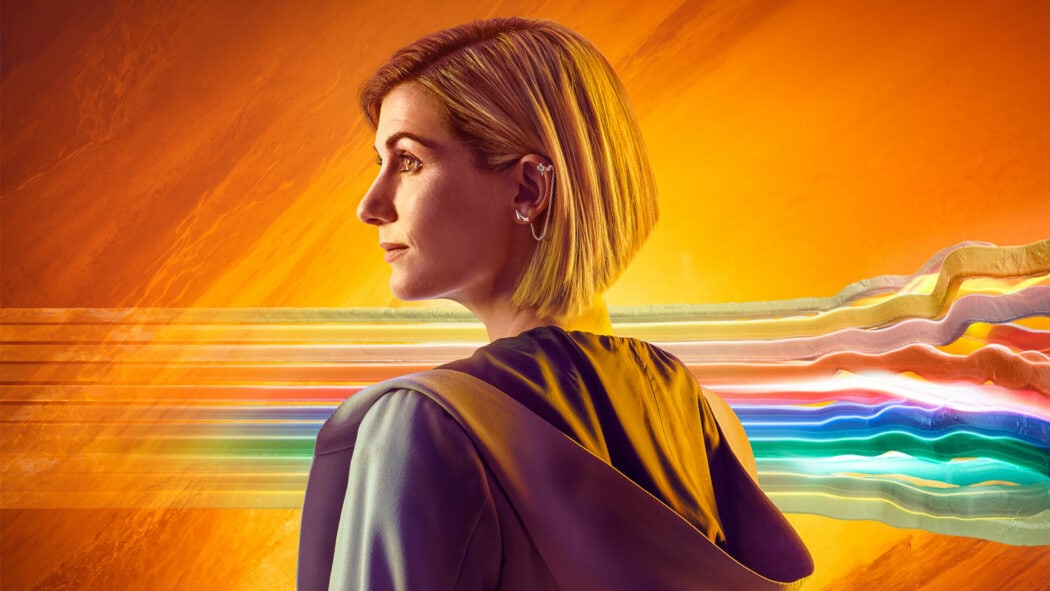 Time to review Doctor Who Flux Season 13 Episode 2 – and a little warning here – there are SPOILERS in this review.

Sontarans at wars with humans?

Well, what’s new, except this time they are meddling with history.

With a new look and time going wrong, in this episode, the Doctor faces the Sontarans during the Crimean War with Mary Seacole.

While Dan is back in Liverpool and Yaz is in time.

The season opener was very chaotic and messy and thankfully in this episode, we deal with one alien.

The Sontarans are back with a new look, but their motives haven’t changed.

They are still a joy to watch and I always love the fact that they can be taken down by smacking on them on the back of the neck.

SONTARANS IN THE CRIMEAN WAR? DOCTOR WHO SEASON 13 EPISODE 2 SAYS SO…

As we all expected, the Doctor (Jodie Whittaker), Yaz (Mandip Gill) and Dan (John Bishop) are all separated in this episode and it worked really well.

The Doctor is left alone in 1855, Russians or Russia no longer exits. Instead, there is just Sontarans and Sontar.

Watching a Sontaran on horseback was a highlight.

It was so unexpected and it worked. Sontarans are fierce warriors we got to see a bit more about their strategies.

The Doctor teams up with Mary Seacole (Sara Powell) and I’m glad that this historical figure got her moment.

She is always side-lines for Florance Nightingale and I’m glad we got Mary Seacole.

I really enjoyed watching Powell, she brought so much life to her character.

It was also nice seeing the Doctor deal with no one listening to her.

I did enjoy watching Whittaker in this episode, as the Doctor does what she does best – outsmarting everyone.

However, she also tried to give the Sontarans a chance to leave. She always has mercy.

Yet I did feel as if the Crimean scenes were just the same scene being replayed in different ways.

There was nice moment, which reminded me of the 10th Doctor.

When the British commander blew the Sontarans up, yet they were leaving peacefully, the Doctor called him out.

That sequence just reminded me of The Christmas Invasion and when Harriet Jones fired on the retreating Sycorax.

DAN AND HIS WOK FIGHT ALONGSIDE KARVANISTA

While the Doctor was in 1855, Dan came hurtling back to Liverpool in 2021, yet the Sontaran’s have invaded Earth.

Faced with death, Dan is saved by his parents.

I really liked watching Dan with his parents. It felt really natural and was quite humorous.

I loved the fact that after this scene Bishop walks around with a wok as that is his only defence.

On the quiet Dan is such an intelligent character.

He knows exactly what he should do, and I am a little surprised that he is so willing to help the Doctor so soon.

However, Dan isn’t any Mickey Smith or Sarah Jane, who has a plan when things go wrong.

He is more of a Donna Noble who gets caught at the last second, but thankfully Karvanista (Craige Els) was there to save him.

Bishop and Els are great in scenes together, it just works so well.

It feels like a love-hate relationship, where neither want to see each other but they both secretly like and respect one another.

Also, their interactions add a little comedy to the episode and make it really enjoyable to watch.

Dan and Karvanista save modern-day earth and they do make an awesome team.

HAS THIS TEMPLE GOT SOMETHING TO DO WITH THE DOCTOR’S ORIGINS? 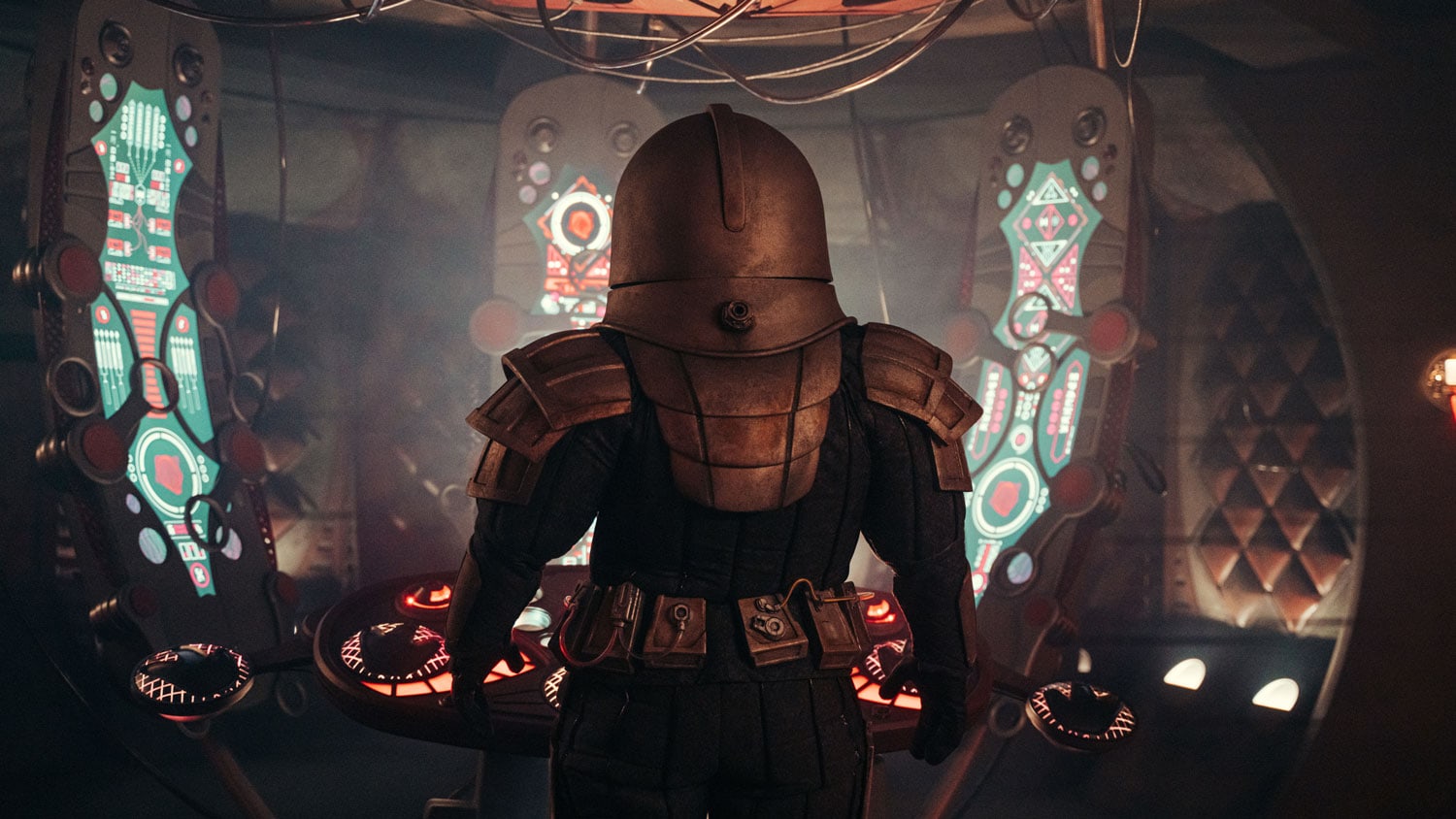 They are both in a very strange looking temple, where a voice wants them to repair a contraption in the main chambers that houses beings known as the Mouri.

The Moui are said to be the Guardian priests of the Temple of Atropos.

They’re from a planet that is responsible for harnessing and controlling time.

I feel like this place is a hint at something to do with the Doctor’s story.

At the moment we don’t really know much about this place, but it would make sense if this is linked to the Doctor’s past in some way.

Was the Doctor originally from there and escaped or it could be something else entirely.

Whatever the case, I’m intrigued to learn more about his temple.

However, I do wonder where this temple is and why the flux didn’t affect it.

IS THIS THE END OF YAZ AND VINDER?

Yaz and Vinder made a good pairing in this episode, there was some chemistry between the characters.

Unfortunately, we don’t get to see much of this pair as our enemies show up.

They are banned from this temple, so it makes me wonder who these monsters are.

I really like them though; they feel really thought out and made to be really interesting.

Also, not to mention they are some of the best-looking monsters we have had for a while.

EPISODE 2 IS A STEP UP, WHAT CAN WE EXPECT FROM DOCTOR WHO SEASON 13 EPISODE 3

The cliff-hanger we are left on is what makes great TV.

We end this episode, with Vinder and Yaz new Mouri and the full force of time energy is about to blast through their bodies.

I feel like they can’t die yet, but I have no idea how they will all get out of this one.

I feel like this place is so crucial to the Doctor’s past, that I hope we don’t have to wait too long for an explanation.

Also, what is happening to the Tardis, is anyone going to talk about that.

The Tardis is clearly hurting from the flux, but it’s just being brushed off at the moment.

This episode was such a step up. It was full of action and some humour and it worked out.

It has answered no questions from the previous episode but it’s made this episode so exciting to watch.

The season clearly has a very complex plot and at the moment Chris Chibnall’s writing is keeping up.