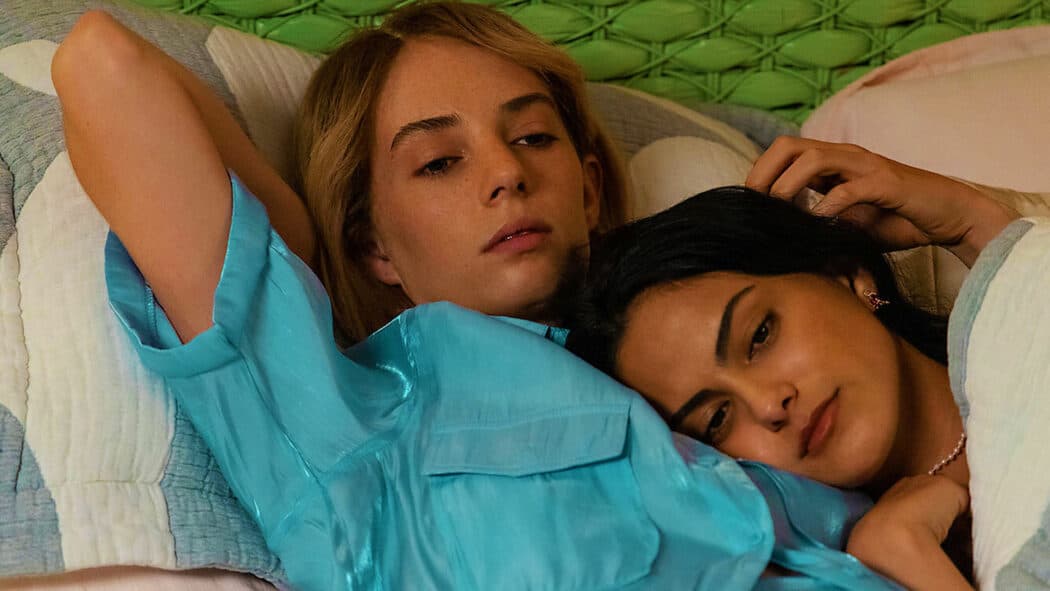 Wait… Netflix is making a Hitchcockian thriller film – suspense, stakes and all – but set in high school? And also a dark comedy? Yep, that’s right. Do Revenge is a new film coming out on Netflix and colour us intrigued with the Hitchcockian spin.

There hasn’t been a high school film that has turned the genre on its head since Rian Johnson’s 2005 Brick starring Joseph Gordon Levit. He turned a high school film into a masterful film noir, and it’s one we watch at least once a year here at Small Screen.

So, when we kept hearing about Do Revenge, we just brushed it off as another Netflix teen film… until we learned it’s in the vein of a Hitchcock movie.

And that Maya Hawke from Stranger Things was starring in it. As well as Riverdale’s Camila Mendez. You had us at Maya Hawke.

When will Do Revenge Be Released On Netflix?

So, what is Do Revenge about, and when does it release on Netflix?

Do Revenge will be released on Netflix on September 16th.

Drea and Eleanor agree to go after one another’s bullies.

Not much to go on, but we’ve done some digging, and we can tell you that this dark comedy takes some shades from Hitchcock’s 1951 film Strangers On A Train.

Drea, played by Camila Mendes, is furious at her boyfriend for leaking her sex tape and wants revenge. Shouldn’t he be an ex-boyfriend then?

Conversely, Eleanor, played by Maya Hawke, is outed by a girl based on a rumour.

The two randomly and unexpectedly meet and decide to team up to get revenge on their bullies. Drea will take on the girl who outed Eleanor, and Eleanor will take on Drea’s boyfriend (hopefully ex-boyfriend by this point).

Why should you watch Do Revenge?

READ MORE: Mark Hamill Reveals What Baby Luke And Leia In Star Wars: The Revenge Of The Sith Look Like Now

Creator Jennifer Kaytin Robinson, writer and director of Netflix’s hit film Someone Great (check it out – It has a fantastic cast), says they took a backward engineering approach to crafting this revenge story.

In an interview with Elle, Robinson said:

What would it be like to take the fun, thrillery stakes of a Hitchcock movie and put it in highschool?

Robinson and producer Celeste Ballard, who co-wrote the film, says one of the goals was touching up the old idiom, “You’re always a villain in someone elses story”, while addressing cancel culture: How we tear people down – as well as – bring them up without the correct information at hand.

It’s also going to tackle how trauma is dealt with.

There will be a lot of surprises in Do Revenge

To top it off, Robinson has said there are a lot of surprises in store and had a message for the viewers:

We want you to have a great f–king time, that’s what this is. That’s what it should be. We’re not trying to solve world peace. This is not some big political statement. It’s just a really fun movie that looks cool and stars a bunch of really excellent actors who are at the top of their craft and are also just gorgeous.

Honestly, at first glance, we just thought this would be another Netflix high school movie, but after researching what the film was about and who is all involved (give us more Maya Hawke, please), we’re going to check it out.

Do Revenge hits Netflix on September 16th later this year!

Will you be watching this Hitchockian high school dark comedy?

Let us know in the comments below; we do read all of them.

And before you go, if you could check out our YouTube channel where we cover all these things and more that would be great. Quack that notification bell!