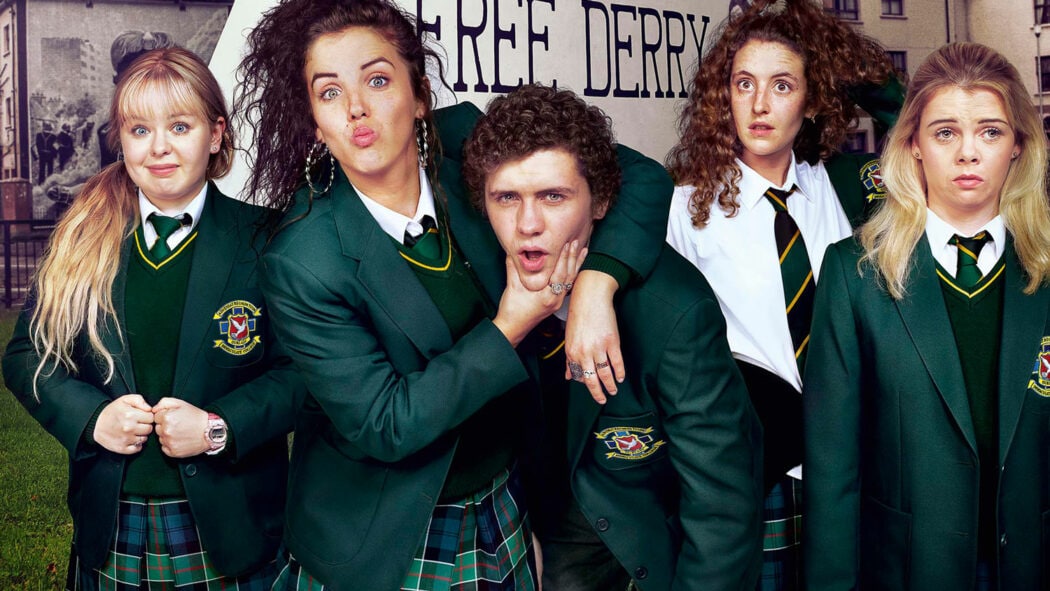 Derry Girls Season 3: Everything You Need To Know

Derry Girls has been off screens for two years but filming for the long-anticipated Season 3 is finally underway.

Derry Girls was created by Irish writer Lisa McGee, who poured her real-life experience into the show, and likens the character of Erin to her teenage self. The series takes place in the 1990s when McGee was a teen and is set to the backdrop of The Troubles in Ireland during that time.

This homage to Northern Ireland adds an extra level of comedy to the series. In fact, in the first season, an entire episode is dedicated to a few hilarious scenes where Erin, her family and her friends just trying to cross the border into the Republic of Ireland.

However, this important setting is also one of the reasons Season 3 has been delayed for so long. Filming was originally due to begin in the summer of 2020, but the COVID-19 pandemic and subsequent restrictions meant filming in Derry was logistically impossible and Season 3 had to be pushed back several times. “It’s really important to us that we keep the authenticity of the show and that we don’t deliver any show that’s in any way a limited version,” explained Saoirse-Monica Jackson who plays Erin (via Metro). “It’s important for us to shoot it at home [in Ireland].”

Thankfully, the cast and crew are back in Derry now and filming began on 27 September 2021, The Irish Post confirmed. Derry Girls star Saoirse-Monica Jackson also made her own subtle announcement of the show’s return, teasing fans with a snap of her in her Our Lady Immaculate College uniform on her Instagram Story.

Where Did We Leave the Derry Girls?

The Derry Girls Season 2 finale aired over two years ago on 9 April 2019, so unless you’ve been re-watching the series (we definitely recommend this!), you may need to recap where the show left off.

In typical Derry Girls fashion, there was a bit of drama and a lot of laughs in the finale. A ceasefire was announced, Joe, Gerry and Colm drove around in circles trying to track down Bill Clinton and the girls bunked off school to see Clinton’s now-famous speech.

The best part of the finale came at the end of the episode though, when James (who had left to go back to London) returned and yelled the now iconic line: “I am a Derry Girl” across the crowded streets of Derry. This emotional reunion was the perfect end to the show’s second season, but now we can’t wait to see what’s next.

What Can We Expect In Season 3? 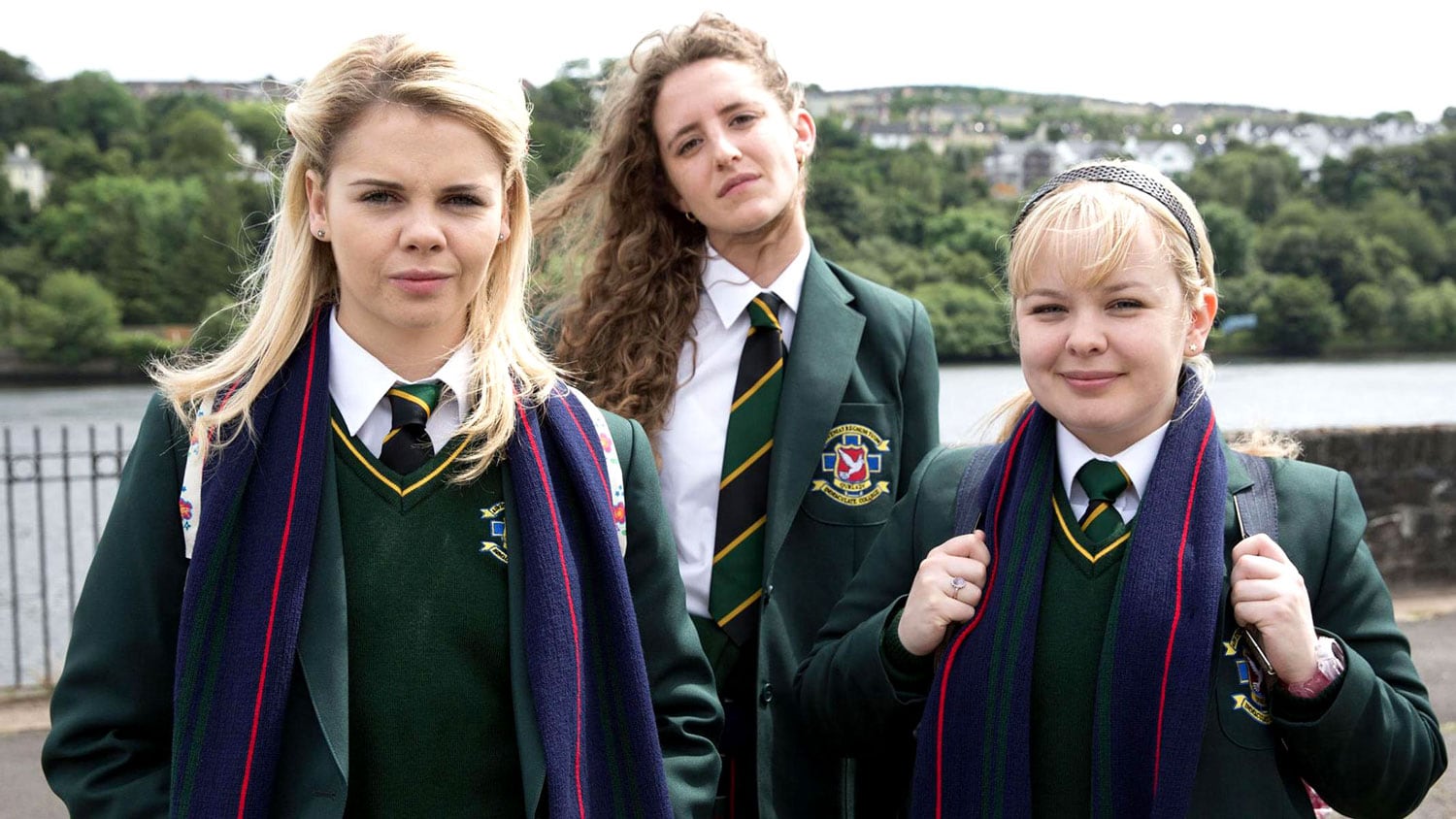 Though we’ve had to wait for it, we can confirm Derry Girls’ third season is going to be a good one.

There are no casting changes, and the main cast will return. This means viewers can expect to see:

However, there are some changes to the timeline which has moved on a couple of years since Bill Clinton’s speech in 1995. The kids will be a little older, around 17 at this point. Derry Girls’ third season will be set in 1998 and focus heavily on the Good Friday Agreement.

The new season may also have a different tone. “They’re still eejits, they still get into a lot of trouble, and embarrass themselves and do all those things you’d expect the Derry Girls to do, but they do have to face some big things this time,” McGee revealed (via iNews). It’s still very much a comedy, McGee confirms, but the teens are forced to grow up a bit in this series.

While there’s change ahead for Season 3, plotlines from the previous series will be continued, and that means romance between Erin and James, which McGee confirms could be on the cards. It’s safe to say fans are rooting for this. After all, who could forget that heart-warming moment when James showed up to take Erin to the dance in Season 2?

“I think that I’ve always had a feeling that there might be something between James and Erin,” said McGee (via Joe). Actors Saoirse-Monica Jackson and Dylan Llewellyn have also noticed the spark between their characters and have previously said they would love to develop this storyline.

However, McGee’s trying to keep fans guessing: “I think though that it might not develop until they’re older, you might never see it.” We might just have to wait until Season 3 for the answer to this, but here’s hoping Erin and James get it together sooner rather than later.

Viewers also have seen little romantic activity for another character, “the wee lesbian” Clare, whose coming out story was a big part of Season 1. While we don’t know exactly what’s in store for her character, Bridgerton actress Nicola Coughlan teased that “the storylines in this series are the best we’ve ever done” (via Evening Standard).

Season 3 Will Be the Final Instalment

Sadly, this will be the last season of the Irish comedy. There has been speculation about this since actor Derry Girls star Tommy Tiernan let slip that this could be the “last” season during an interview with Jason Manford on Absolute Radio in early 2020 (via Express).

The show’s creator and writer Lisa McGee confirmed the news. “It was always the plan to say goodbye after three series,” she wrote in a statement she published on Twitter a few days before filming began. McGee said her hope for Derry Girls was that it would show Northern Ireland during “a new more hopeful phase” which she says was “a small, magical window of time.”

“Derry Girls is a love letter to the place I come from and the people who shaped me. It has been an honour to write it and I will be forever proud of everything it’s achieved,” she added.

While this is truly sad news for fans, McGee hasn’t closed the door on her beloved characters forever. “Who knows if Erin, Clare, Orla, Michelle and James will return in some other guide someday, but for now this is it for us and we’re excited to start filming this series with our incredible cast and crew to hopefully take our loyal fans on one last adventure.”

At least this means the show will end on its own terms — or Lisa McGee’s terms, we should say.

When Will Season 3 Be On Screens?

Since filming has begun, the release of Season 3 isn’t too far away.

Derry Girls has a confirmed release for 2022. Though the exact date hasn’t been announced, fans can expect to see the comedy on screens “early next year” according to star Tara Lynne O’Neill (via Irish Mirror).

The third season will be released on All 4, followed by a global release on Netflix.