To preface this recap, if you are looking inquisitively at this episode of Shameless Season 11’s title trying to figure out what the heck it means (as I did for a few solid hours): NIMBY is an acronym for “Not In My Backyard,” a saying that perfectly summarizes this episode. Here’s our Shameless recap.

Like each episode of Shameless, “NIMBY” followed the show’s main characters into whatever crazy plotline they threw themselves into this week. However, they all gathered around one major event that is likely to be continued for the next few episodes— possibly all the way to the end of the series, and that’s the sudden arrival of the trashy and prejudicial Milkoviches into The Gallagher’s neighbourhood. That’s right. Arch-nemeses Terry Milkovich (Dennis Cockrum) and Frank Gallagher (William H. Macy) are now neighbours. As you can predict, it’s not going well. What do you think? Are we going to get a kumbaya ending with the two families putting their differences aside and forming a South Side alliance? Or will this end in a fight to the death?

This week’s episode started with a Lip (Jeremy Allen White) opener and a recap of the last episode before launching straight into a gun show; Frank was awakened by the loud sound of his next-door neighbours moving in. By the time he made it to the front porch, everybody was already there. As the brood angrily watched the Milkoviches move in, the Milkovich-turned-Gallagher Mickey (Noel Fisher) added, “I guess the city made good on their threat to condemn our old house, that or the meth lab caught on fire again.” You could tell familial tension was going to arise on the surface when he was unfazed by the gunshots coming from the new neighbours. When the Gallagher’s complained, Mickey explained that they are just playing “I Spy, You Shoot,” a concept close to the traditional children’s game “I Spy” however for the Milkoviches, once the item is spied, it’s shot at.

The youngest of the Gallagher siblings, Liam (Christian Isaiah) was fazed the most by the Milkoviches new presence. They are dangerously and loudly racist, every other word out of their mouths tends to be a -phobic slur. Liam objects to them moving in next door saying, “I don’t want to be the reason for the next Black Lives Matter march.” His storyline this week was alongside Frank and Kev (Steve Howey): The three of them came together to figure out how to get rid of the Milkoviches. 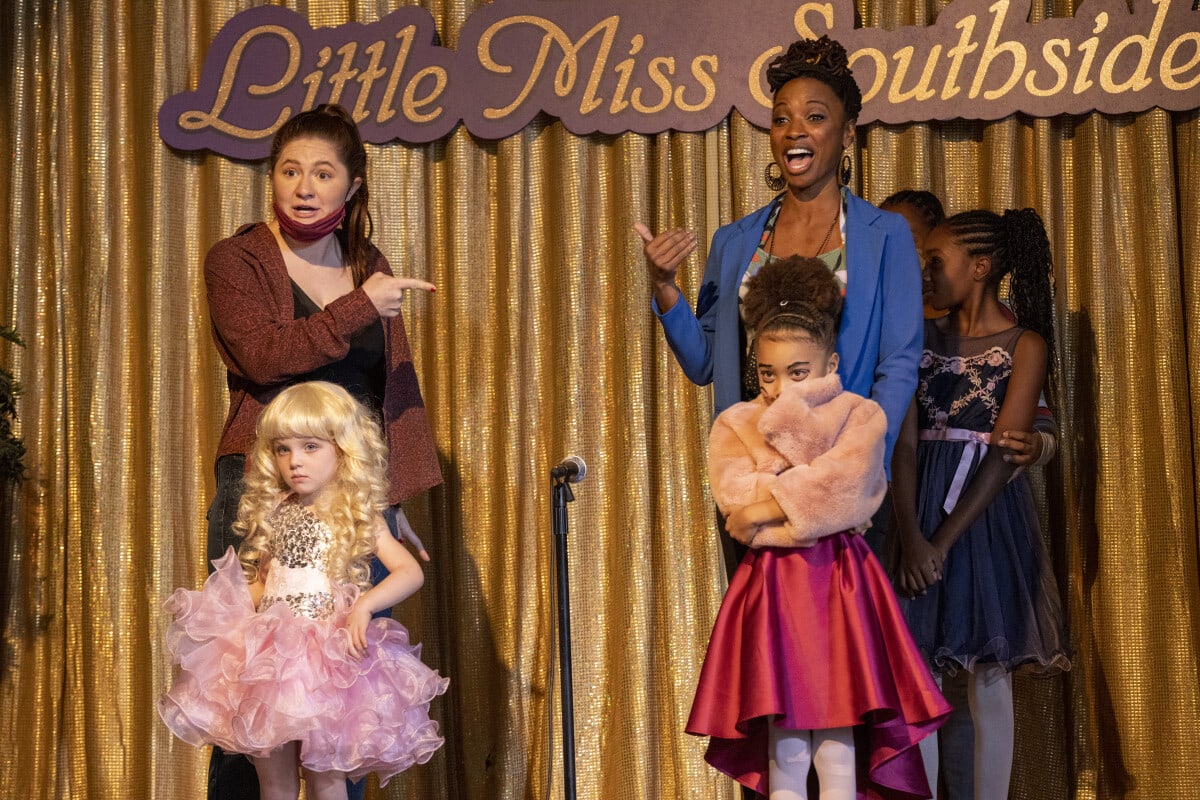 Kevin suggests that they set bedbugs loose through their neighbour’s house but Frank protested his idea: “The bedbugs and lice will just train at the Milkoviches and evolve and attack everybody else.” (This episode was sure a good one for one-liners.) Liam suggests a simple solution, “Let’s just move and get away from the racists,” the poor kid was clearly scarred and terrified. Frank then suggests they go a classier-route, after his suggestion about building a neighbour association gets rejected, he decided that they should outsource the problem to the local Islamic church who quickly turns a blind eye to them once the Milkoviches are mentioned—  the Milkoviches have wreaked havoc on the entire community, plus the surrounding ones. Looks like the Gallaghers are S.O.L.

The group of three decide to distract their neighbours to sneak into their house, which is being shared with an elderly lady. The plan is to convince the community that the lady is being manipulated and abused, but they don’t get the evidence they were looking for. Instead, they find out that the Milkovich patriarch, Terry, is sleeping with her.

While this plays out, another red flag springs up. Similar to last week, we see that Frank is losing memory as after their failed plans, he once again suggests that they try the Islamic church. The moment is brief and quickly glossed over, insinuating that this will eventually be a substantial storyline (which I am dreading).

Ian (Cameron Monaghan) and Mickey are finally done with the newlywed fighting which hopefully came to a stop after the last episode and then again, at the end of their Hall of Shame special. Freshly on unemployment, Ian finds himself lounging in the living room, eating “his weight in Fruit Loops.” Mickey is put off by this behaviour and suggests that Ian starts working for him, an offer that his partner vehemently dismisses. However, after witnessing Mickey pack an unregistered gun for his new job transporting illegal weed money for Kevin and Veronica (Shanola Hampton), Ian forces him to drop the gun. He makes Mickey abandon the thought of replacing it with any other illegal weapons by reminding him that they are on parole and if Mickey gets caught, he’s going right back to prison. They find themselves at an Army surplus store looking for protective gear. The two end up leaving with combat clothing and a plan that they will do the money drop under the disguise of an active-duty soldier. 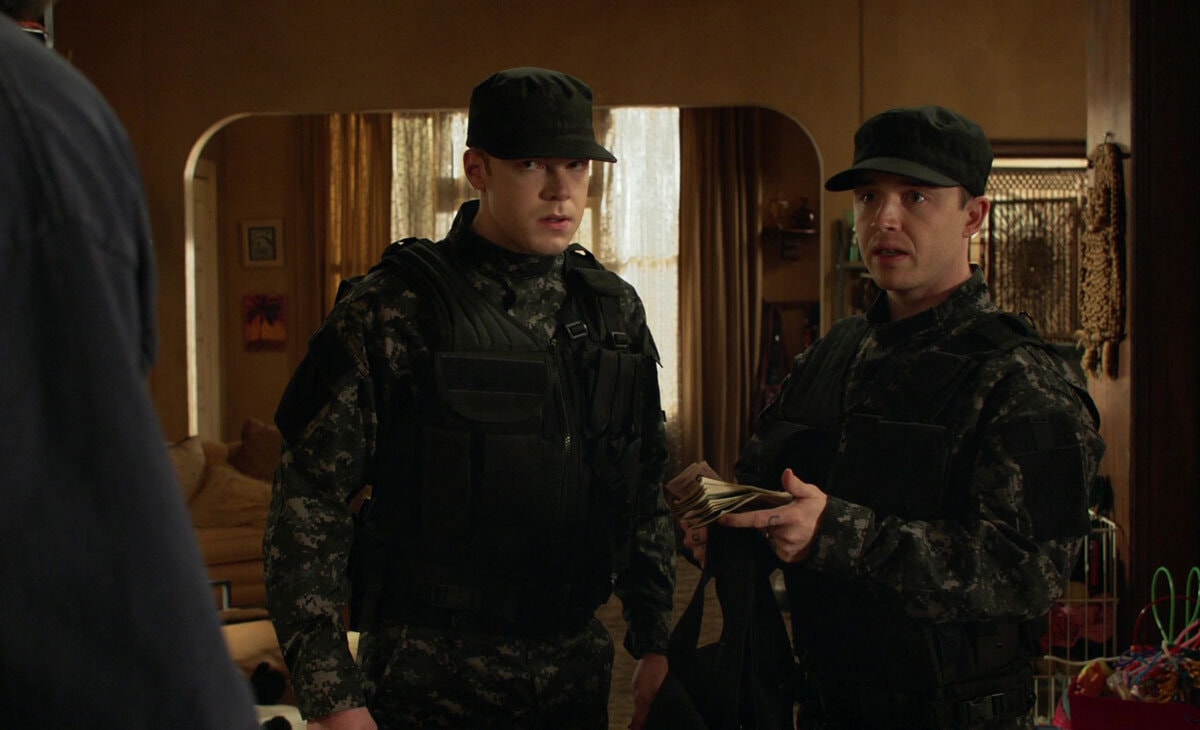 Their plan ends up looking ridiculous as Kev hands over the easily-concealable $1,653 they have to transport to reserve the team’s weed hook-up from a local grow house. Things work in the couple’s favour though as the grow house manager is impressed by their uniforms and offers them both security jobs with an a-grand-a-day salary.

The two bicker a bit in “NIMBY” as tensions with the Milkovich’s close proximity arises. Mickey remains loyal to his family, despite their abusive past and protests about his sexuality. He seems to have a short-temper when it comes to the Gallaghers talking bad about them. Throughout the episode, to multiple people, he argues that the Gallaghers are only one-step above the Milkoviches: The Gallaghers aren’t much different “other than the daily showers and lack of swastikas.” His argument is rather weak though as Gallaghers aren’t White Nationalists or homophobes, and they tend to get along for the most part, unlike his family.

Debbie (Emma Kenny) and Veronica are going head-to-head at the Little Miss South Side pageant. At the top of the episode, Debbie “Where’s Franny” Gallagher catches her daughter destroying her hair while being unattended to. The little girl mistook super glue for hair gel.

After Debbie has no luck finding a child’s wig, Mickey suggests that she get one from the cancer centre despite Sandy’s (Elise Eberle) suggestion that they leave Franny as is and commit to breaking society’s beauty norms. Debbie explains that she’ll commit to “breaking the concept of feminist beauty after she [Franny] wins Miss South Side,” so Franny ends up being decked out in a Jon Benet Ramsey-esque wig and a decorative pink dress, appearing like someone who just walked off of the set of Toddlers and Tiaras. 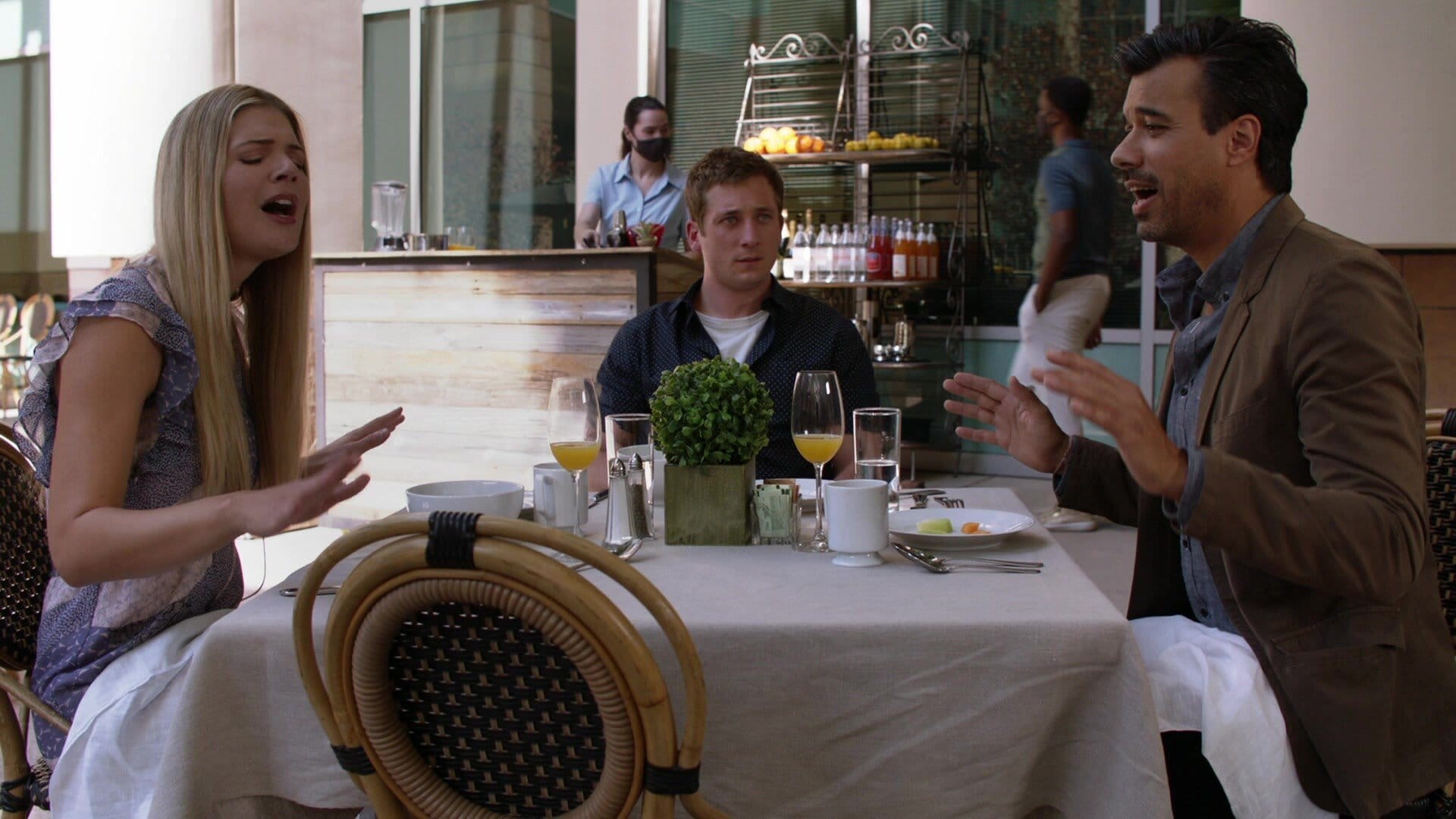 Franny is unenthusiastically competing against Veronica’s daughter, Gemma (the one of the twins whose application got accepted). She freezes on stage and doesn’t even manage to get to the talent portion before Veronica reminds the judges that there are timed slots and the Gallaghers have gone over theirs. When Debbie gets upset over this, Veronica tells her, “When you’re used to privilege, equality feels like oppression.”

This storyline goes the predicted way: Debbie sabotages Gemma’s makeup look, Veronica tells the judges that Debbie is a registered sex offender, and neither of them win. However, throughout this Veronica tells a long-winded speech about what Little Miss South Side means to her and her personal experience growing up in the community as a young Black girl. After accepting her daughter’s loss, a local political candidate expresses interest in her speech and says he would love to hear more about what she has to say on the issues affecting their community. I predict that she’s going to join his campaign as a staffer and embark on a new short-lived political career (something similar to her business last season where she drove around a medical truck to help those who are uninsured and unable to get access to proper healthcare).

Carl (Ethan Cutkosky) and Lip both had great storylines. This was really a strong episode for all of the characters. While Carl’s cop storyline is a little too fresh for our current political climate, it really shone this week. He spends the day with the same training officer from episode 3, Leesie Janes (Toks Olagundoye). It becomes a problem when every law-breaking citizen they encounter seems to have a friendly past with Carl and he finds it hard to arrest or punish them. There is a touching moment where after a local loose cigarette dealer is a victim to Janes’ superiority complex, Carl revisits her while off-duty and makes amends.

There is something to say about Shameless’ choice to make the tough cop, Leesie Janes, a Black woman while Carl gets to be a white saviour in a predominately-Black community. It is a predicted plot as Carl has always had a soft spot for humanity, but it’s strange that his first, lacklustre “look the other way” training officer was also played by a white man. Hopefully, there’s some resolution in that area while the story plays on.

Lip and his girlfriend Tami (Kate Miner) end up going to brunch with Tami’s old music teacher, who he later finds out is one of her exes. There’s another great one-liner here where Lip expresses his disdain for the meal, “Brunch is a scam. Marketers made a fourth meal and we’re just supported to go along with it.” Things get awkward as Lip finds out that Tami dated this man, Marcos, while she was in high school.

The whole situation was incredibly awkward to watch, Lip was not having it. Tami and the teacher were flirting the entire meal and even ended up bursting into song while at the brunch table. After Lip points out the pedophilic nature of the two’s relationship, Tami defends it saying “it was another time,” to which Lip quickly counters and says, “It was 2010!” Marcos had obviously groomed her and that comes to light when he shows up at their house to check out their renovations and his fiance is revealed to be his 17-year-old student.

“NIMBY” was a stand-out episode for this season. Shameless has pulled out stops to make this final season a humour-fest and they definitely kept the momentum going with their 2021 premiere.