This week’s episode of Shameless Season 11 doesn’t hesitate to dive into the Gallagher’s crazy lives. The season premiere paled in comparison; while that was a warm-up, this was an actual start to the storylines we can expect to see unfold this season. “Go Home, Gentrifier!” was much less introductory and we finally got to see the antics of the littlest Gallaghers, Liam (Christian Isaiah) and Franny (Paris Newton)— if you missed last week’s episode of Shameless Season 11, clled “This Is Chicago!”, you can check out our recap here.

The fourth-wall opener showed Carl Gallagher (Ethan Cutkosky) cleaning his gun and reminding us that he’s now a police officer, proclaiming to the viewer, “Hey! Back up, what do I look like, an information lady? No, I’m a law enforcement officer, emphasize on the enforcement.”

While last week, we referred to the pandemic-fixation as a bit “awkward,” this week the officer schtick did some damage. Within the first few minutes of the episode, Carl entered the kitchen in his work sweater, in response, everybody in the kitchen raised their hands up and shouted various messages of “Don’t shoot!” With the recent George Floyd shooting and the ongoing violence-related disparities experienced by Black lives at the hands of American law enforcement workers, it was a jarring comment that felt like a poorly-delivered too soon joke. The joke seems remedied a few scenes later as during a workplace segment, a comment is made about how much “it sucks to be a white guy in America” and the scene instantly cuts to Carl, the cop. Irony, at its best. 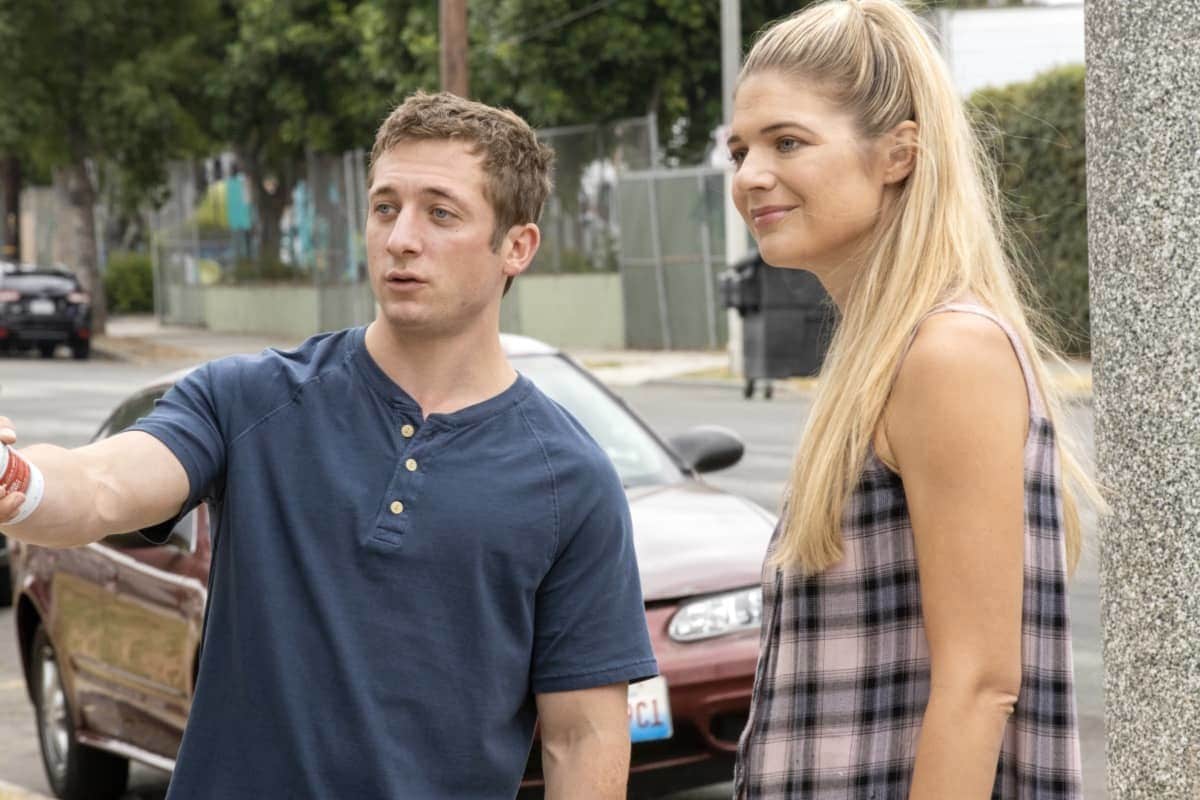 Ian and Mickey continue to be the dumps. Ian (Cameron Monaghan) is currently working at an Amazon warehouse scuffling through expired foods. At the beginning of the episode, he threatened to withhold sex from his newlywed husband Mickey (Noel Fisher) until he finds a job, making legal money. That means no more scheming, Mickey. Right? Doesn’t look like it.

After disgustingly lazing around, Mickey caught an aggressive ad for a community college. The ad proclaimed, “Stop disappointing the people you love!” causing an uproar from Mickey. He ended up interviewing at the Amazon warehouse that his husband works at. The interview went horribly as Mickey misread the questions and gave his most raunchy Milkovich answers. He delivered some honestly towards the end, pleading with the interviewer, “I really want to work here” before having a major meltdown, much to Ian’s dismay as he was in the background with his coworkers.

Mickey ended up stealing a car and a dumpster filled with expired and trashed items from the warehouse, pawning it off to the chef at his old correctional facility for a few hundred dollars— he used some of it to buy Debbie’s daughter, Franny, a pair of toy guns for her birthday. Curse you, Shameless, for making him so likeable! Towards the end of the episode, Ian seemed to be in a rough spot having picked up on some paycheck cuts inflicted on him by his employer. Pay cuts for lunch, locker fees, and his uniform turned his 45-hour paycheck into a 39 hour one.

Lip and Tami play it easy, enduring very little conflict. Tami (Kate Minter) followed Debbie (Emma Kenny) and Sandy (Elise Eberle) around as they shopped for Franny’s birthday party. During a playful lightsaber fight in the Dollar Store, she received a call from her boyfriend Lip (Jeremy Allen White) telling her that their house has been vandalized.

Returning home from the infamous Gallagher house, Lip found his new place with a broken window and trash littering the lawn. He attributed the roughhousing to “some rowdy teenagers” who don’t know that a Gallagher lives there. However, it turned out to be an older woman by the name of Marsha. After being caught red-handed with her two accomplices, she confides in Lip and Tami that their renovations have caused her to worry about increased rent and property taxes. She said, “We’ve been here our whole lives and now we’re being pushed out. Where will we go then?” 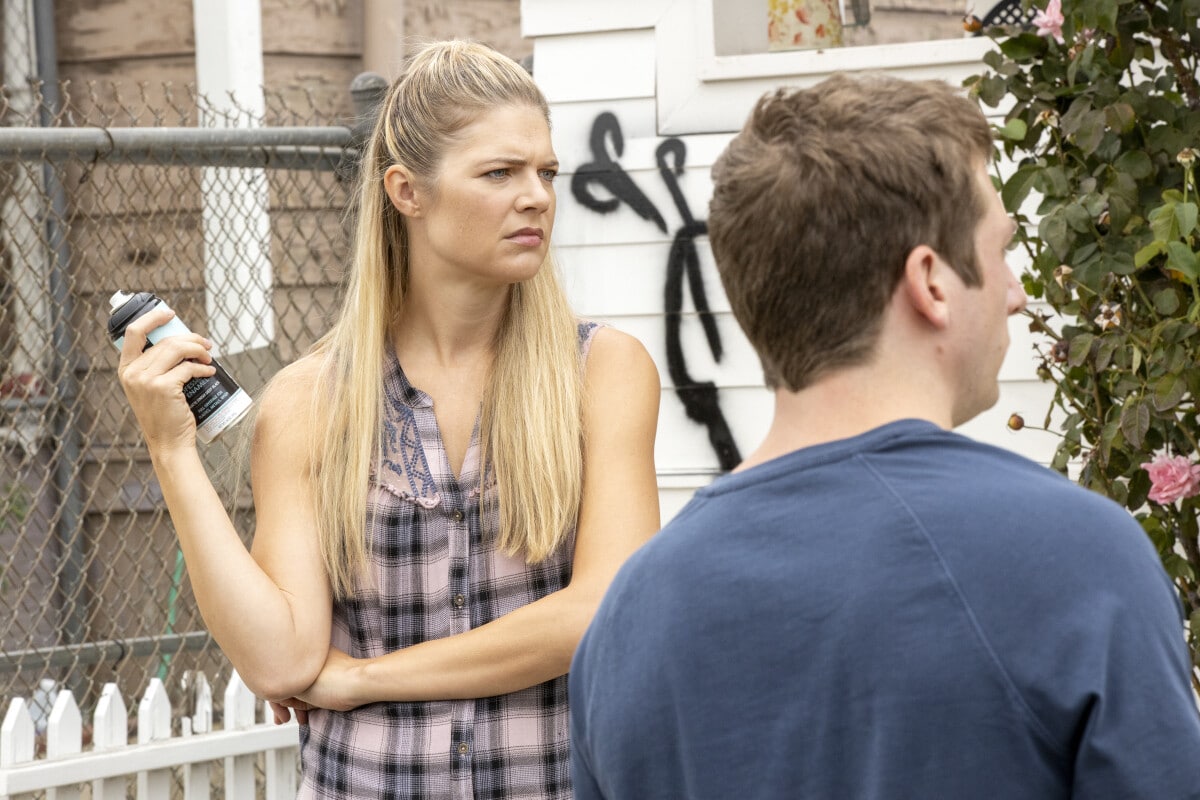 The episode ended with the two vandalizing their own house, despite having earlier claimed that they “just wanted something nice for themselves.” Lip spray-painted “Go home, gentrifier” onto the house’s exterior wall while Tami spray painted a lewd image. It’s refreshing to see the couple on the same page!

Debbie and Franny launched into party-planning mode as it’s Franny’s fifth birthday. Throughout the episode, Debbie ignored the fact that her daughter doesn’t like princesses as she begins planning and putting together a princess party. To her shock, the bouncy-castle company delivered a Dracula themed bouncy house and none of Franny’s school friends showed up, probably due to Debbie being on the sex offender list. Franny ran off mid-party to chase “Uncle Mickey” around with her new toy guns.

Sandy tried to comfort her about the failed party, to which Debbie responds carelessly, saying she wouldn’t do anything different. She tells her, “It’s gotta be about me sometimes.” Which was a rather strange confession as things are usually about her.

This episode follows Carl “the new police officer” Gallagher around on his first day of work. He ended up paired with a quite boring partner. This seasoned cop, Officer Tipping (Joshua Malina), prefers to avoid trouble. Tipping bypassed many violent and drug-related crimes throughout the day, much to Carl’s disappointment. The two spent the day rapping to Eminem, taking long lunch breaks, and napping at Best Buy before stopping to direct traffic after spotting a broken traffic light.

Carl convinced Tipping to abandon his mundane routine and go out to grab a beer with him after their shift. During their outing, Tipping drank too many beers and got frisky with a random woman, despite being married. Disturbingly enough, this ended up with him having a heart attack in a bathroom stall and Carl had to watch him being wheeled out into an ambulance where it is insinuated that he flatlined. Big yikes!

Had a fantastic time working with @EthanCutkosky on @SHO_Shameless. He makes a great partner. pic.twitter.com/f31QfEKl4k

“Illegal Drug Connoisseur” Frank, Veronica, and Kevin decided to go into business together as local weed dispensaries were sold out and Frank (William H. Macy) knows his way around illegal dealings. Occasionally-insightful Frank reassured his business partners after they voiced their concerns about his sketchy connections by saying, “It was the rich people who legalized marijuana and messed up a system that’s been working for decades.”

It turns out that Frank can easily transition into a domestic weed-infusion master as he dotted around Veronica (Shanola Hampton) and Kevin’s (Steve Howey) kitchen, teaching them all of his greatest tricks to cooking edibles and weed brownies. Later on, he caught them trying to screw him out of the deal by continuing on without him while using the knowledge they got from him. However, he was one-step ahead and bought out his dealer before they could arrive. Looks like they’re stuck with him for the time being.

Shameless’ Liam had an actual storyline for once, and it was a good one. Towards the beginning of the episode, he was seen making an abundance of peanut butter sandwiches. When questioned by Lip, he told him that he’s making them to sell to “lunch debt kids.” Lip shows concern, asking, “So, you’re capitalizing on the misfortune of others by selling them your peanut butter sandwiches?” To which Liam replies, “It’s the American way!”

We later find out that he is selling them for donation only as he’s seen trading a sandwich for a student’s Red Bull energy drink. After being berated for selling food on school grounds, he stood on a bench wearing his super cool “Black Lives Matter” mask and gave a heroic speech, telling his classmates, “I didn’t grow up with money either” and “I’m just one man trying to make a difference.” This child is going places!

Revisiting the popular topic from last week, what happened with Tommy and Kermit? The two were seen having an intimate rendezvous under the influence of drugs and alcohol. Well, it wasn’t ignored in this episode. The two arrive at the Alibi sitting on opposite sides of the bar. Everybody questions them, concerned by the excessive space as the two are typically barfly buddies. They caulk it up to social distancing and ignore the interrogation. Frank tells them to “kiss and makeup already” to which Kermit looks at Tommy who quickly looks away. Personally, I hope this gimmick continues!

“Go Home, Gentrifier!” really got the ball running for Shameless, leaving its fans with story starters that we’re excited to see bubble up and explode. It’s clear that this show is going out with a bang.

What did you think about the episode? Did we cover all of your favourite parts from this week’s episode of Shameless Season 11? Is there a storyline that you’re most excited about? Let us know in the comments!

When Will Lupin Season 2 Be Released On Netflix?