With the news that Wonder Woman 1984’s Christmas release is (unsurprisingly) in peril, 2020’s theatre release slate is effectively over now making it one of the sparsest years for cinemas on record. With this unending hell year, it may be difficult to remember that there was actually a brief time when we were packing out theatres to see a blue hedgehog run around a dancing moustache-twirling Jim Carrey, form a buddy-cop bond with James Marsden, and advertise Olive Garden – ah wonderful artistic bliss we’ve missed you so.

What we wouldn’t give now to be overcharged for day-old popcorn and have a complete stranger furiously swipe their way through Tinder throughout the entire back half of The Invisible Man… If you can’t remember such an idyllic Time Before™, let us take you on a little journey back to January through early March and remind you of what we did briefly to enjoy this year before the catastrophic implosion of global normality.

The perfect valentine’s film for both him and her: Sonic the Hedgehog brought Sega’s favourite lil’ blue guy to the big screen and the results were actually surprisingly okay.

Sonic first captured the attention of the entire internet’s ire and meme-ifying dissection when its initial trailer in Spring 2019 was lambasted for the absolute abysmal 3D design of Sonic himself.  Complaints were largely focused on how much the film Sonic departed from the original and beloved smirking cartoon icon of the games and tv show.

There was also the shuddering issue of his horrifyingly human-like teeth. The trailer was made fun of so much that Paramount quickly announced a 3-month delay in release as they vowed to change the design to something more in line with fan expectation. Genuine blunder, or big brain ploy to generate free discussion? Who’s to say.

Regardless, expectations remained relatively low for the film’s eventual release so it was a pleasant surprise for all when Sonic turned out to be an all-round fun flick with good performances from the likes of Carrey and Marsden, and a good throwback for fans of the franchise.

Like Detective Pikachu before it, Sonic threaded the needle on effectively adapting a video game character to the big screen, and, with its impressive box office return, may have paved the way for future video game franchises to follow suit. 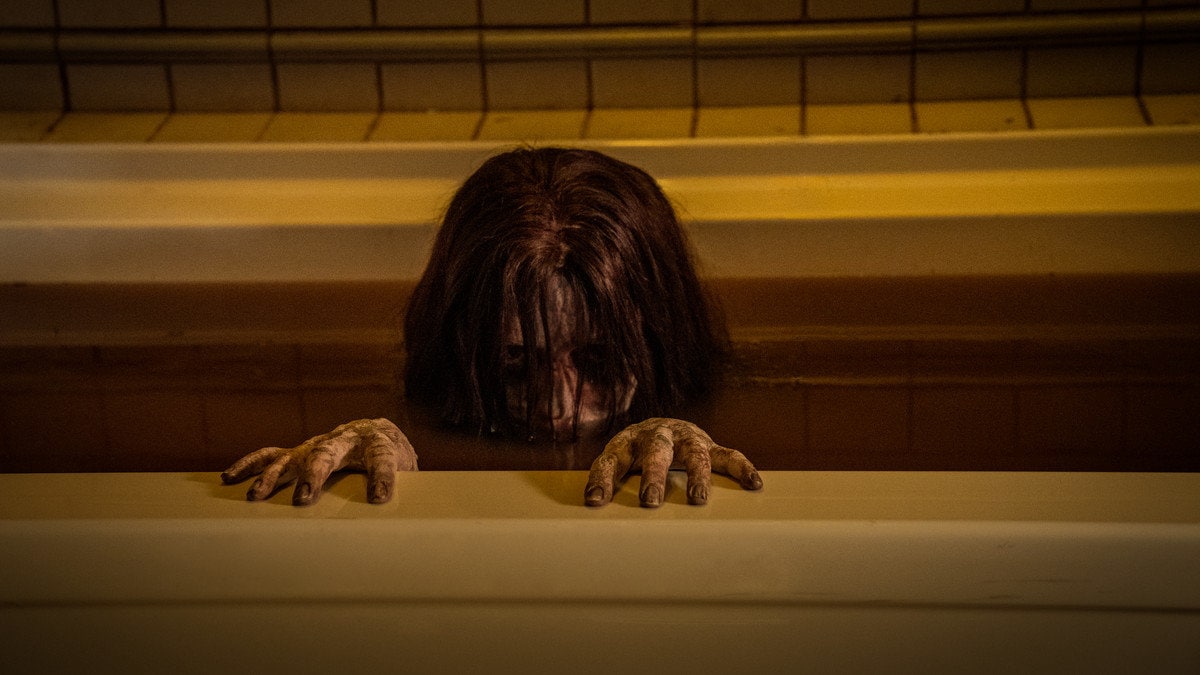 Read more: Is Vin Diesel’s Bloodshot Worth Watching While In Lockdown?

The very first scene of 2020’s first film released has the titular Grudge scaring someone ineffectively from a bin bag which if that isn’t just the perfect encapsulation of the rest of this year – let alone the film The Grudge itself – then I’m not sure what is.

Maybe we should have recognised the early warning signs when they were initially smacking us square in the face. Although that would also assume that literally anyone went to see this film on release, which they very much did not.

2020’s reboot of The Grudge is a mess of failed jump scares, uninteresting characters, and an unnecessarily complex time-skipping structure that ails the film far more than it ever adds to it. The film is forever in a rush to “get to the scare” which leaves it utterly devoid of any lasting tension, or really any fear-factor at all. Not quite what you want from a horror.

If you missed The Grudge first time around don’t worry about it – watch Netflix’s Ju-On: Origins series instead. 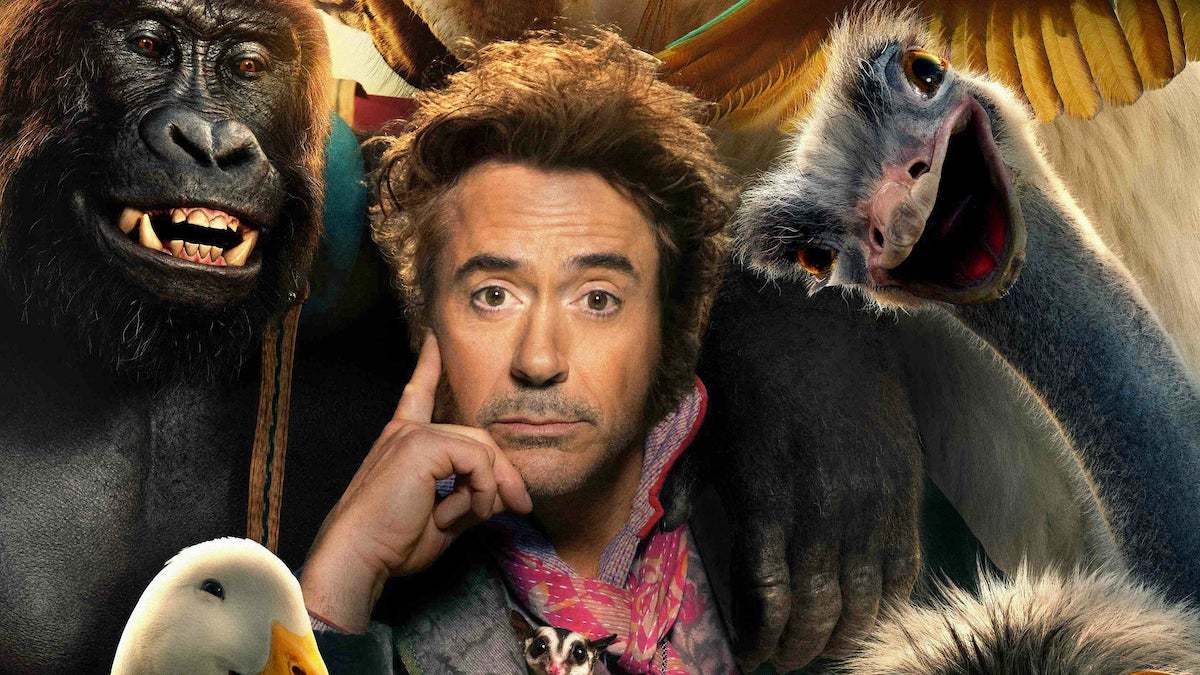 Yet here we are with the Downey husband-wife duo supposed passion project that both producers Robert and Susan Downey had been championing since early 2017 (why? who knows), and the Marvel star brought plenty of his friends along for the stomach-churning ride with an inflated cast of the likes of Tom Holland,  Rami Malek,  John Cena, Emma Thomson and Kumail Nanjiani all stepping in as zany animated animals to support Downey Jr’s even zanier lead.

The result is an assault to the senses. Between Downey Jr’s ever-shifting Scots-Irish-Welsh-Russian accent, an extended dragon fart scene, and a frankly dull and near incoherent plot that makes 101 minutes feel like 3 hours, Dolittle manages to thread the impressive needle of both not being interesting for kids nor their tortured parents.

And with an already troubled production history that featured multiple rewrites, reshoots and realignments of direction and creative lead, Dolittle racked up a huge $175 million production budget that would need at least a $500 million return to break even.

It fell well short of that with a final box office gross of $250 million worldwide, making it the year’s first big flop.

Read more: The Invisible Man And The Hunt Will Be Made Available On Demand This Weekend

Releasing the same weekend as Dolittle, Bad Boys For Life ran in the opposite direction to total-success with a grand return of $424.6 million against a $90 million budget, making it the highest-grossing Western film of 2020.

This is all the more impressive considering BBFL is a third sequel 17 years on from its last instalment, and that, much like Dolittle, it had been in pre-production and production on and off supposedly since 2011.

Even with the 17-year gap, both Martin Lawrence and Will Smith manage to seamlessly drop back into their renegade cop roles in a fun and thrilling film that continues in the same explosive tracks of its Michael Bay-directed predecessors. Its success and positive response means fans will likely not have to wait another 17 years for a further sequel. Set in the depths of the Mariana Trench, with frightening killer monsters/aliens, an ocean disaster, a hard-ass female lead, and a science crew survival quest aboard a claustrophobic vessel/facility,  Underwater is as close to a James Cameron wet dream not directed by James Cameron that you’ll find.

Underwater was certainly one that was again largely missed by audiences. But while the story is perhaps generic at best, and at worst imitative of every sci-fi genre replicant of Ridley Scott’s Alien, Underwater is at least fun and bloody enough to merit a position as one to go back to.

If you’re looking for a no-complexities Creature Feature then Underwater will certainly provide. Kristen Stewart, while perhaps a little vacant as a filled-out character, does well to at least shoulder most of the weight of the film and carry the audience through some truly claustrophobic set pieces and wondrous monster sequences. Plus, anything with even vaguely Lovecraftian elements is alright in my book.

As loathed as I am to once again write anything even adjacent to Suicide Squad, the one bright spot of Ayer’s failed villain feature is that Margot Robbie’s Harley Quinn became favoured enough to merit her own spin-off film.

But while the critical response to the confusingly titled Birds of Prey (And The Fantabulous Emancipation of One Harley Quinn) was generally positive with an onus on Robbie’s performance and the film’s fun direction that succeeded where Suicide Squad had failed, the bad-will of DC’s previous films and the frankly ridiculous “outcry” and “contention” against a predominantly female lead cast and director meant that Birds of Prey fell below Warner’s expectations.

Margot Robbie’s Quinn still remains a fan-favourite however, and so she will be reprised in James Gunn’s upcoming The Suicide Squad. Though it is uncertain whether the character will get a solo sequel again.

To one of the best films of the last year now, Leigh Whannel’s third directorial feature, The Invisible Man, solidifies him as a master of both horror and 21st century cultural and technological critique. The Invisible Man is a testament to just letting the camera speak for itself as a tool for enforcing tension and inferring horrific circumstance.

Whannel builds on his camerawork lessons from the already impressive Upgrade to create a work in The Invisible Man that creates dread from something as simple as holding a frame for a second too long on an otherwise empty space. Being that the film is about an unseeable antagonist, large parts of the tension building requires that you are effectively looking at nothing, and yet The Invisible Man still manages to transfer the fear and paranoia that Elizabeth Moss’ Cecilia is haunted by after enduring the gaslighting and abuse of a toxic relationship.

In the wake of the ongoing Me Too movement, The Invisible Man does well to dramatize the horror of such abusive relationships and give an alleviating catharsis for its victims – while also delivering just a genuinely good horror film in of itself. For Moss herself it is a performance that even without the reduced list of entrants this year should surely be a contender for a lead Oscar nomination.

Unfortunately, the film was at the unfortunate middling cusp of releasing close to the initial COVID-19 lockdown measures meaning it most certainly may have been missed – if you did then do yourself a favour and pick it up now!

Read more: A Bloodshot Sequel Is In The Works With Vin Diesel Returning

The biggest loss of the UK’s 16th March lockdown announcement truly was that Vin Diesel’s Bloodshot – released 3 days earlier – would never get its just place in the sun. Even though Diesel seemed to have known what was coming before all of us by moving Fast 9 a full year back before anyone else had made such a drastic call (Bond by that point had only been delayed a few months), not even he could save Bloodshot that close to release.

And so the film was resigned to a very partial cinema release before heading to VoD to salvage what little earnings might still be possible. As for the film itself – well, it may be the worst of Vin Diesel’s narcissistic transgressions so frequently enforced upon his on-screen personas.

In Bloodshot, Diesel is a marine brought back to life through nano-technology meaning he is now invincible and possesses superhuman strength (which he shows to the audience through an extended weightlifting scene which might be the greatest piece of cinema ever created). In this invincible form, he goes on a brutal revenge rampage against the guy who killed him – pretty generic schlock.

The interesting part of Bloodshot – and it is very fleetingly interesting – is the brief period about halfway through the film where the narrative turns and becomes a film that is almost metatextual as its cast of characters sans Diesel are suddenly in a conjoined effort to effectively recreate a “Vin Diesel Movie™” for Diesel’s character himself to unknowingly become the protagonist in.

I know, I know. Sounds mental, maybe even temptingly brilliant. But it’s only briefly so and before long Bloodshot returns to a sub-standard action flick with a climactic mess of rubbery CGI that wouldn’t look out of place as a cutscene in a PS2 game.

Come to this one for the Diesel, but maybe leave soon thereafter for the, well uh, Diesel…

Which of these movies did you manage to catch in cinemas in 2020? And what did you make of them? Let us know in the comments below.