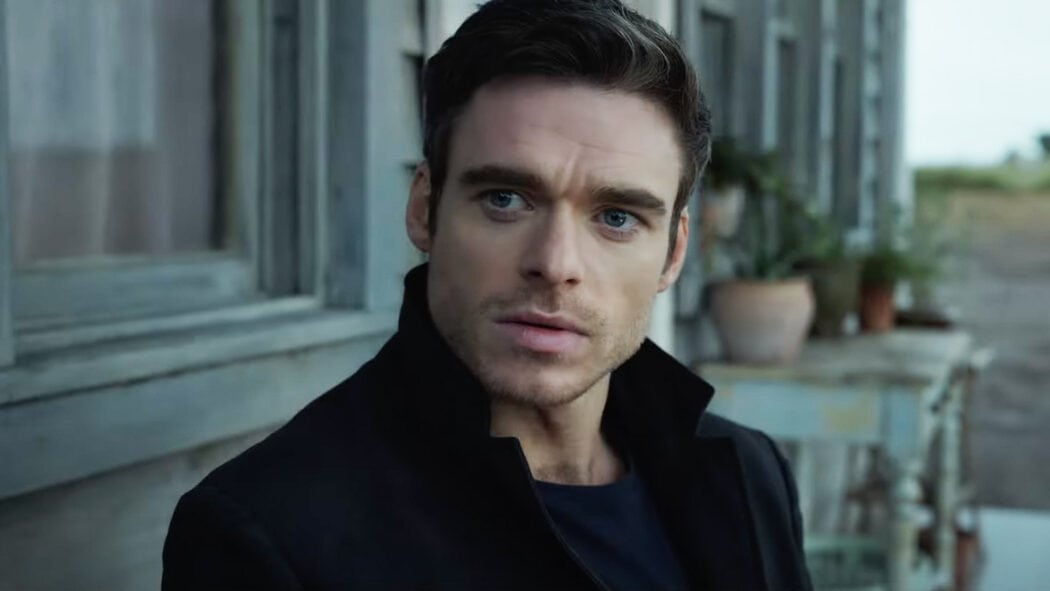 Now, I have to preface this by saying that this reported plot leak for Marvel Studios’ Eternals could be total and utter rubbish.

However, it goes without saying that there are POTENTIAL SPOILERS for Marvel Studios’ Eternals in this article.

OK, now that I’ve got that out of the way, let’s get onto where this leak came from and what it says will happen in Chloe Zhao’s movie.

So, the leak came from, you guessed it, Reddit…

I never really believe anything from Reddit, which is why I put “supposed” in the title of this article.

However, since watching Eternals‘ second trailer I am now thinking that there might be some truth behind this leak.

What is Marvel Studios’ Eternals’ plot all about? What does the [supposed] plot leak say?

Read more: First Look At Angelina Jolie In Costume As Thena In The Eternals

Right, so what does is the supposed plot for Marvel Studios’ Eternals?

If you don’t want to know anything about the movie, look away now.

Here is the ‘plot leak’:

Opening title card explaining the Deviants and Eternals – the Deviants were created by the Celestials to hunt predators that prey on intelligent life on newly evolving worlds, but then they started to hunt the life as well, so Celestials created the Eternals to kill the Deviants.

Opens 5000 years ago in Mesopotamia a man is fishing on some rocks with his son (?) and is attacked by a Deviant from the ocean. The Eternals show up and a short battle commences, after which they line up in a triangular “hero” pose and this rolls into the Marvel logo opening.

Jumps to present-day – Sersi [Gemma Chan] and Dane Whitman [Kit Harington] are teachers in the UK and dating. During a class lesson, a large earthquake strikes, and Sersi saves a child from a falling object by turning it to sand. Later while out on a date, a Deviant attacks Sersi, Sprite [Lia McHugh], and Dane; during the battle Ikaris [Richard Madden] shows up and they fight it off after noting that they thought all the Deviants were destroyed and unlike others, the Deviant was able to heal its wounds.

The group decide to visit Ajak [Salma Hayek] as she was the leader of the group. After arriving at the midwest ranch where she is now living, they discover her dead body, A small golden device leaves Ajak’s body and enters Sersi (this is how she communicated with the Celestials) – they then decide to round up the rest of the Eternals to deal with the Deviants.

Thena [Angelina Jolie] and Gilgamesh [Ma Dong-seok] are in Australia (I think) due to an issue with her memory causing her to randomly attack the other Eternals. Gilgamesh is obviously in love with Thena but it is not played as a romantic relationship.

Phastos [Brian Tyree Henry] and his husband live with their child and he decides to help due to the fact that he has fully embraced the human race and wants to protect his family.

Makkari [Lauren Ridloff] has been living in the Eternals ship all this time (I guess, since there is a bunch of food containers and mess strewn about.

Kingo [Kumail Nanjiani] is a Bollywood actor (there is a short dance routine that introduces this) and comes with the group along with his valet (don’t recall the name) who tries to document everything on video.

Druig [Barry Keoghan] is living in some rainforest controlling a small village of people after losing faith in humanity and wanting to control them to stop war, famine, etc. Gilgamesh is killed fighting the Deviants in the forest.

Sersi learns that the Celestials created both races and that the Eternals are basically just very advanced robots. They seed young planets with a Celestial ‘egg’ that takes eons to mature. The evolving intelligent life on these planets feeds the Celestial’s growth, so the Eternals are sent to protect the evolving life forms and kill the Deviants. After the emergence, the Eternals are ‘rebooted’ and sent to another world (this is the cause of Thena’s memory issue, as she knows that the planet is doomed) – this cycle has gone on for millions of years. Earth was seeded and Tiamut is about to emerge (this was the cause of the earthquake earlier). Once awakened, the entire planet and all life will be destroyed.

They debate on what to do and some decide to try and find a way to stop the emergence. Ikaris disagrees, Sprite and Kingo are on his side but Kingo agrees to help.

Phastos designs a device (Uni-Mind) that will allow Druig to channel all the Eternals energies in the hope of controlling Tiamut and putting him back to sleep.

Sersi learns that Ikaris knew about the Celestials actual plans and this is why he left the group hundreds of years ago. He killed Ajak because she had decided to help stop the emergence and save Earth.

The group go to where Tiamut is and attempt to use the device – Ikaris and Sprite attempt to stop them. Sersi then uses the device to amplify her power and turn Tiamut to marble just as his hand and part of his head is emerging from the Indian Ocean.

Ikaris flies off into space (towards the sun – unclear if he just left or flew into the sun and killed himself), then Sersi makes Sprite a real human with what remains of her power.

A few days (?) later Thena, Makkari, and Druig leave in the ship to seek out other Eternals and try and stop the cycle of destruction. Sersi, Kingo, and Phastos stay on Earth but are then pulled into space by Arishem and vanish.

The two end credit stingers: 1) Dane is looking at an old box and pulls out a sword that is wrapped up. Just as he is about to touch it, an off-screen voice stops him. 2) On the Eternals’ ship, Pip the Troll appears and introduces Starfox.

Let’s talk specifics about this leak 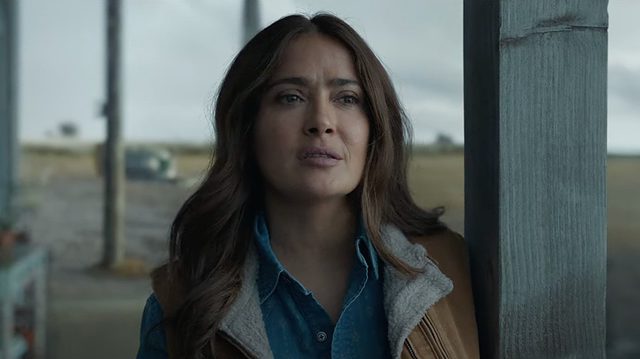 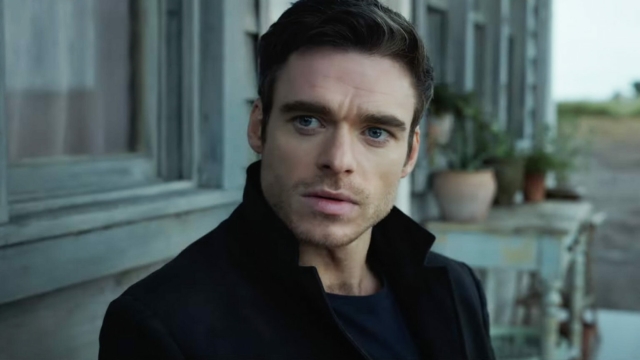 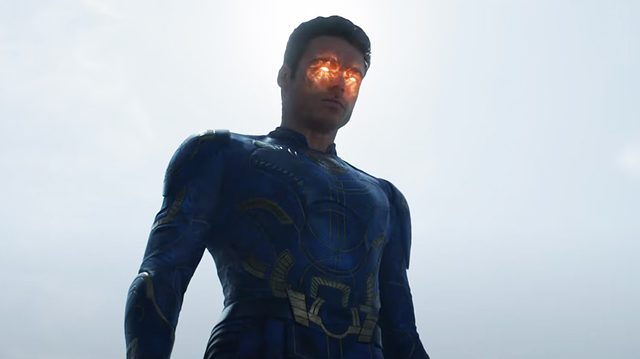 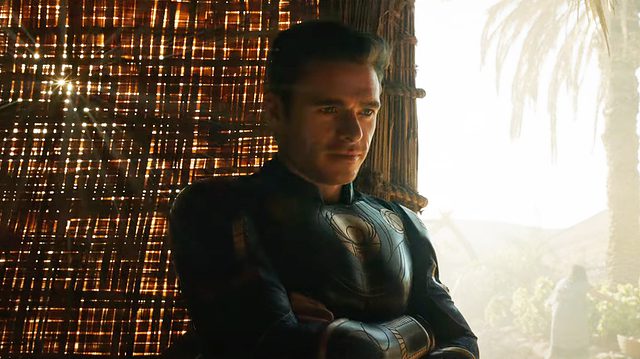 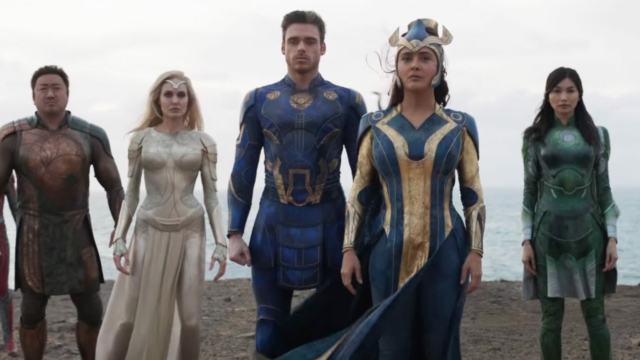 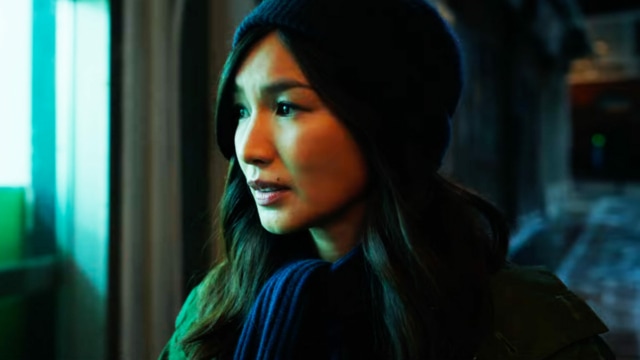 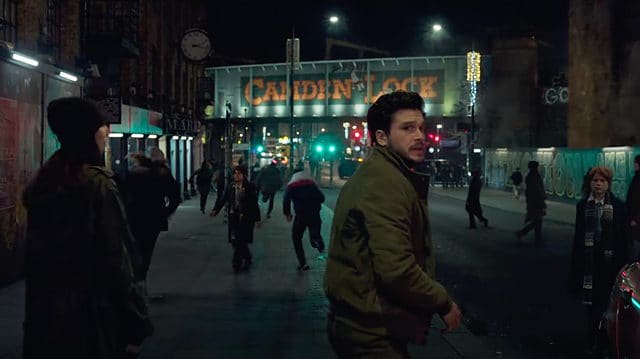 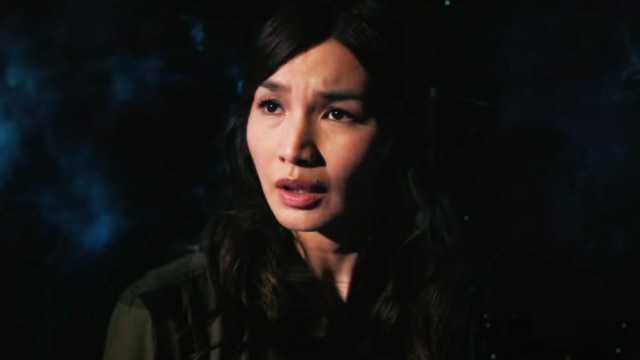 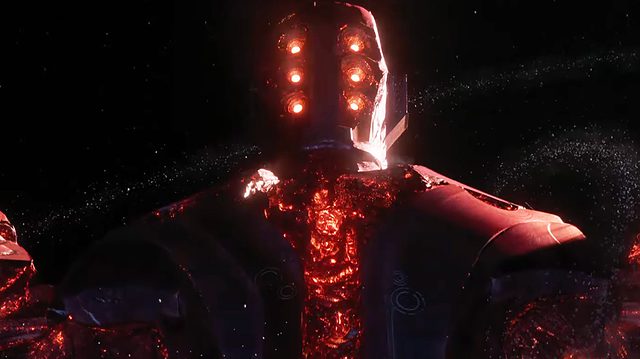 Read more: Marvel’s Eternals Plot Synopsis Teases The Arrival Of The Deviants To The MCU

It’s a big old leak and there’s a lot of information in there.

Given the fact that this was posted five months ago and we only just saw the movie’s second trailer today, there’s actually a lot of stuff in this leak that was confirmed by the trailer.

First off, the trailer confirms that Sersi [Gemma Chan] and Dane Whitman [Kit Harington] are indeed both living in London.

I’m not sure whether they’re dating or not, but the trailer does make it seem as though the two of them are close.

Then there’s the whole bit about Ajak [Salma Hayek] living on a ranch in the midwest of America, which is confirmed by the movie’s trailer.

However, in the trailer, she’s talking to Ikaris [Richard Madden] and she’s definitely not dead.

The other thing that the plot leak states which was confirmed by the latest trailer is that Druig [Barry Keoghan] is living in a rainforest type place.

OK, then there’s the whole thing about Thena [Angelina Jolie] and Gilgamesh [Ma Dong-seok] being in Australia.

The leak states that Thena is having memory issues, and in the trailer, when you see her character and she sees the other Eternals, she doesn’t seem to recognise them.

It also looks like she is in Australia and she is also training with Gilgamesh in the trailer.

So, there’s a lot in this leak that has seemingly been confirmed by the latest trailer.

Marvel Studios’ Eternals will be in cinemas (yes, cinemas!) on November 5th, 2021.

What do you make of this leak?

Do you think this is a genuine plot leak for Marvel Studios’ Eternals?