Episode three of WandaVision bids farewell to the black-and-white decades of the 50s and 60s and launches us directly into the saturated television style of the 70s. This episode introduces us to watching WandaVision but, now in colour— a witty take on the episode’s title. Excitingly enough, between the show’s premiere and this episode, Disney also released the titles of the first two episodes. They were titled “Filmed Before A Live Studio Audience” and “Don’t Touch That Dial,” both referencing common television sayings during their respective decades.

Enough about that, let’s launch straight into everything that happened in this week’s episode of WandaVision!

WARNING: SPOILERS for WandaVision Episode 3 in this recap!

This episode picks up with Wanda Maximoff’s (Elizabeth Olsen) strange and sudden pregnancy that was revealed at the end of episode two. The setting and characters scream “70s!” as Wanda is dressed in a subdued red mini flare dress topped with a striped blue, red, and orange cardigan, an outfit that’s not complete without brown knee-high boots. The interior of their house matches beautifully, they have decorative rock and brick furnishings, a green couch, patterned paintings littered throughout the house, and a green and yellow kitchen. It was all very Brady Bunch-esque. Much like the last two episodes, the theme song was also adjusted to fit the decade. It was poppy and smiley, showing a montage of Wanda and Vision doing things like shopping and sharing ice cream cones.

Launching straight into action, Wanda and Vision (Paul Bettany) are meeting with a misogynistic doctor called Dr. Nielsen (Randy Oglesby). He comes into their house and evaluates Wanda, telling her that she’s most definitely pregnant — a moment of pure absurdity and laughter as Wanda is very visibly pregnant. Dr. Nielsen explains that he tends to describe the stages of pregnancy to women using fruit because it’s easier for them to understand. Oh, an ode to the overt sexism of the 70s.

On the doctor’s way out, Vision asks the doctor to “keep the news just within the family” and that’s the end of that, the doctor is on his way to Bermuda. Coming back into the room, Vision tells Wanda, “I can’t wait to be a proud papaya” holding up the fruit from their living room bowl. Classic sitcom joke! The next few scenes can be described in a blur. Wanda uses her magic to build their future child’s nursery and Vision is reading pregnancy manuals. He reveals through his calculations that she has progressed six months into her pregnancy in just a few minutes and estimates her due date to be in roughly three days — “Friday afternoon.”

There are a few fluffy moments between the two. They bicker over what to name their child; Vision likes “Billy” and thinks it’s fitting for all of the greats (like William Shakespeare) and Wanda like “Tommy,”  the All-American name. Vision is racing to learn how to change diapers having Wanda track his time, when the ball drops: Wanda is going into labour.

Here’s Where WandaVision Gets Weird 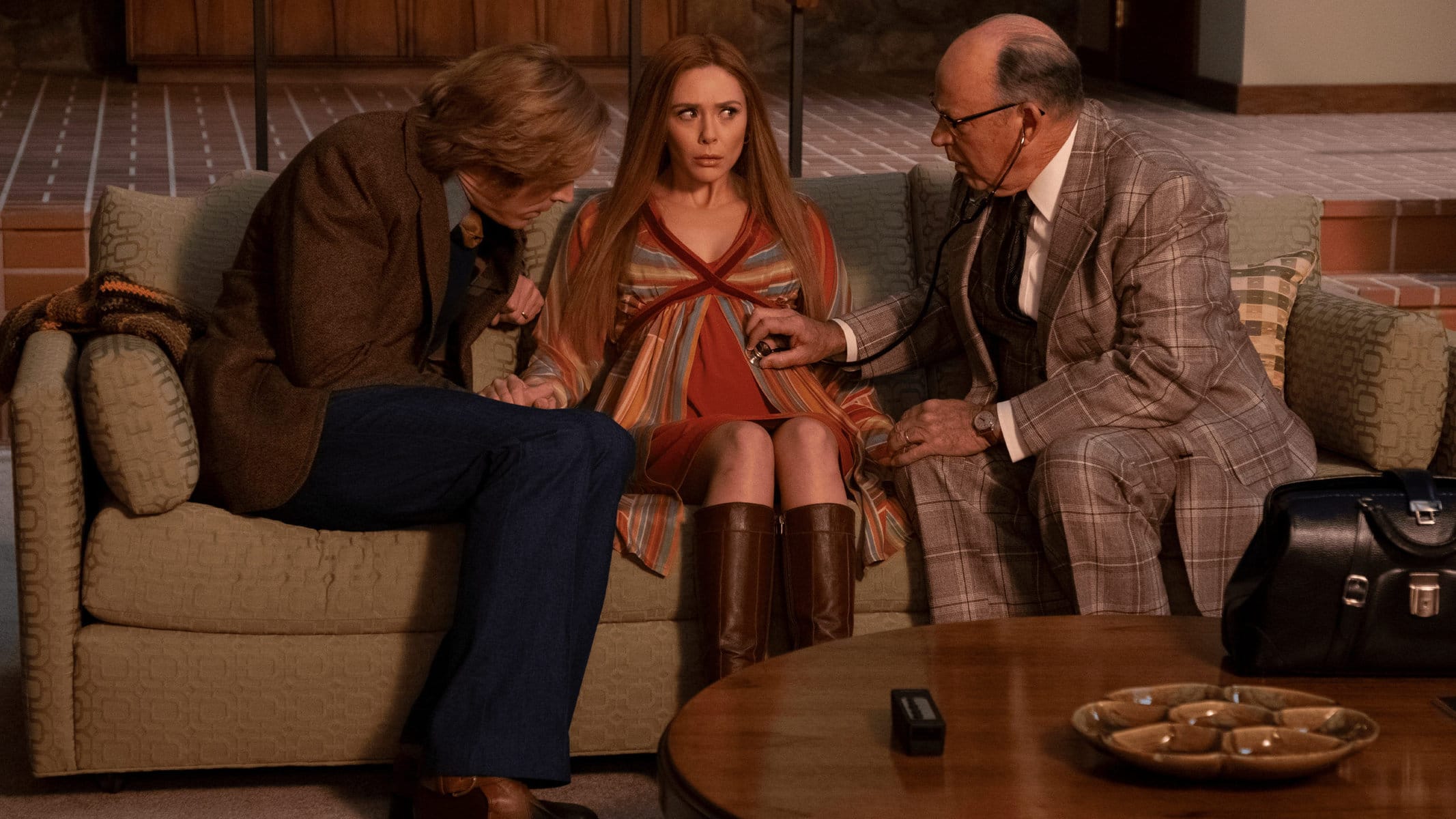 What starts out as Braxton Hicks falsies quickly turns into the real deal. As Wanda begins to give birth, she loses control of her powers. Things in their house begin malfunctioning and their sink is erratically filling with water. The scene quickly cuts to their neighbour Dottie (Emma Caulfield) and shows her household suffering a power outage. Wanda jokes, “That was just a fake contraction, who knows what’ll happen when the real thing comes out.”

This is when things start to get really weird. When Wanda and Vision casually chat about the neighbours seemingly being on the brink of figuring out their secret, Vision expresses to his wife that their situation seems to be more serious. He confides to her, “Something is wrong here.” Wanda appears panicked at this moment and suddenly we are repealed back in time. Vision’s new response is, “I’m anxious too,” and the couple moves on. At this moment, it is further hinted that Wanda is in control of this reality— something that we saw in episode two when faced with the threat of a mysterious man emerging from the sewer outside their house, she merely says “no” and suddenly, the couple was transfixed into another moment in time.

Back to their ever-breaking reality, the couple ponder over what the baby will be —- “Human? Half-synthezoid?” — and then her water breaks (quite literally, as it is signified by an indoor rainstorm).

Vision rushes to catch their doctor, suddenly possessing superspeed powers— another sprinkle of weirdness. He’s never been able to do that before. And at their house, Geraldine (Teyonah Parris) shows up under the pretence of needing to borrow a bucket. The two become engaged in a silly game with Wanda trying to hide her pregnancy and Geraldine ((who we suspect is actually Maria Rambeau??) noisying around her house. Eventually, Wanda’s getup is ruined as Geraldine discovers the nursery and Wanda begins actually giving birth.

Once Vision arrives with Dr. Nielsen, it’s too late. Geraldine has already delivered their baby and is holding an appealingly-human newborn (who actually comically appears to be a 6-8-month-old baby but whether that’s a casting thing or purposeful is anybody’s guess). While the two gush over “Tommy” Wanda begins unexpectedly birthing a second baby. They have twins! Vision walks the doctor outside and wishes him a good trip to Bermuda to which the doctor responds that he is no longer going to go: “It’s a small town, hard to escape.” From here, things only get weirder and weirder.

Neighbours Agnes (Kathryn Hahn) and Herb (David Payton) are gossiping outside, saying things like, “Did you see her go inside?” clearly having concerns about Geraldine. As Vision approaches the two, the scene cuts to inside the house where Geraldine and Wanda are fussing over the new babies. Wanda confides to Geraldine that she is a twin and mentions her deceased brother Pietro before beginning to sing a Sokovian song while rocking the babies’ crib.

Geraldine looks despairingly and says, “He was killed by Ultron, wasn’t he?” This sets Wanda off and she begins berating her, asking her to repeat what she said, but Geraldine only responds with lies— “I said, Wanda, you’re a strong lady.”

It cuts back to the neighbours and Vision, Herb is trying to explain their concerns. He repeats. “She came here because..” but trails off, being directed by Agnes to keep hush. The neighbours both make flawless exits and Vision is left alone, rushing into the house. His public face is gone by the time he enters the house, appearing truly in his android form, despite assuming that Geraldine was still in the house. He asks, “Where’s Geraldine” and Wanda sinisterly replies, staring out into the distance, “She left, honey. She had to rush home.”

The final scene shows Geraldine being thrown out of the “TV World” — she is forcibly rejected through static fuzz and the episode expands in ratio, no longer appearing in 4:3 aspect ratio and instead of taking up the entire screen. Geraldine is ejected past the Westview town sign and into an area resembling a military camp, surrounded by helicopters and cars, and that’s where the episode ends. There were a few “devil in the details” moments in this episode. WandaVision is continuing with its commercial breaks. This time they were advertising a bubble bath product that allows you to “escape from your home.” The product was called Hydra Soak. Additionally, in the final scene between Wanda and Geraldine, the latter was seen wearing a SWORD necklace, making that the third SWORD reference of the series. So, with the Pietro name-drop and Vision randomly possessing super speed— which was Pietro’s superpower, many are wondering if Pietro will make an appearance. And more importantly, if he does, who will he be played by? Avengers: Age of Ultron’s Aaron Taylor-Johnson or X-Men’s Evan Peters. My bet is on the later, as Evan Peters appears as a WandaVision cast member on Google despite Marvel Studios and the cast staying mum about surprise appearances.

What do you make of this WandaVision recap? Let us know your thoughts in the comments below.