The first episode of The Nevers opened the door to this world, lots of ideas and mysteries that need to be solved. Following on from the events at the opera caused by Maladie (Amy Manson). All touched are now suspects and feared even more than they use to be. In this episode, Lavinia Bidlow (Olivia Williams) hosts a charity gala where a few selected touched women join to show off their abilities but more to amuse so people won’t fear them. While Amalia True (Laura Donnelly) is helping Frank Mundi (Ben Chaplin) with his investigations and Hugo Swan (James Norton) has his own touched party going on.

WHOSE SIDE IS LAVINIA BIDLOW ON IN THE NEVERS? 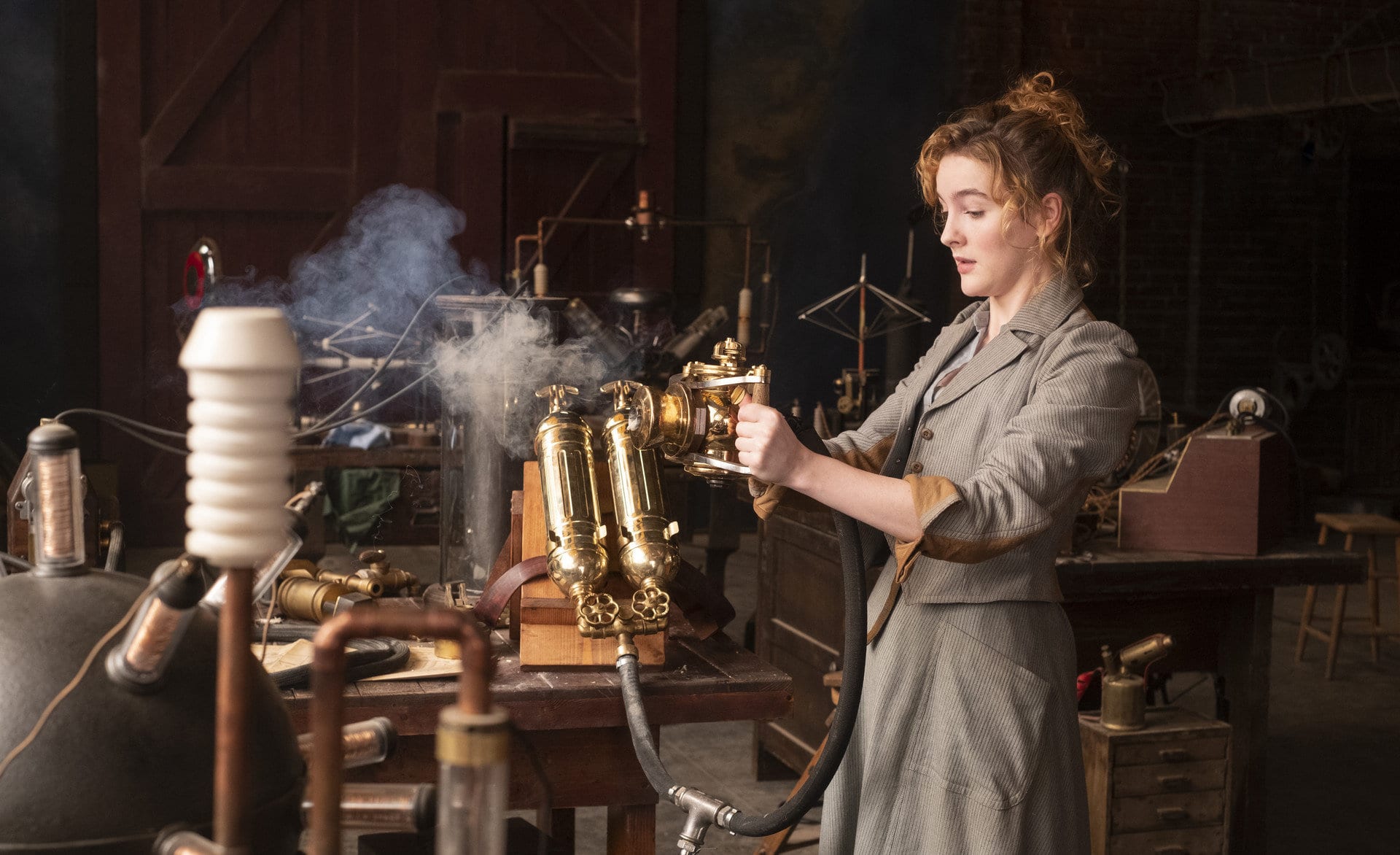 Lavinia Bidlow is a confusing character; she has an orphanage for those who are touched to keep them safe. Yet she is also in charge of the scientist who is completing horrendous experiments on the touched to see what makes them special. How much does Bidlow really know on what is going on? It’s going to be fun to find the answer to these actually very important plot-wise questions.

THE TOUCHED ARE SEEN AS OUTCASTS

This may sound strange but I’m getting Nazi Germany kind of vibes from The Nevers and how far the touched are being made to feel like outsiders. I think it is clever how the show has added little elements to make the touched appear like outsiders without directly saying it. We have seen characters discuss the social class of where the touched fit in and it appears they do not really fit in anywhere or they are just the lowest class and don’t deserve respect.

Now in this episode, while at Bidlow’s party, the touched must wear blue ribbons so members of the party know they have been touched. This is due to, except for Primrose, the touched powers being hidden so the ribbons clearly show they are different to everyone else. It’s also another form of segregation these characters must deal with.

Bidlow’s party is on one side of the spectrum where the touched must only use their gifts to a limit and treated like circus acts, while otherwise being polite to show they are not threatening. Compared to Hugo Swan’s opening night at The Ferryman’s Club where men in power can have sex with touched women. These women can be completely free with who they are but for the fortune of someone else. We have been shown the two sides of life that touched have to deal with in one episode and its quite sad that touched are so pushed out of normal life that they either must conceal who they are now or they can show who they are but it’s for someone else’s happiness.

FRANK MUNDI HAS MORE THAN ONE REASON TO RESUCE MARY 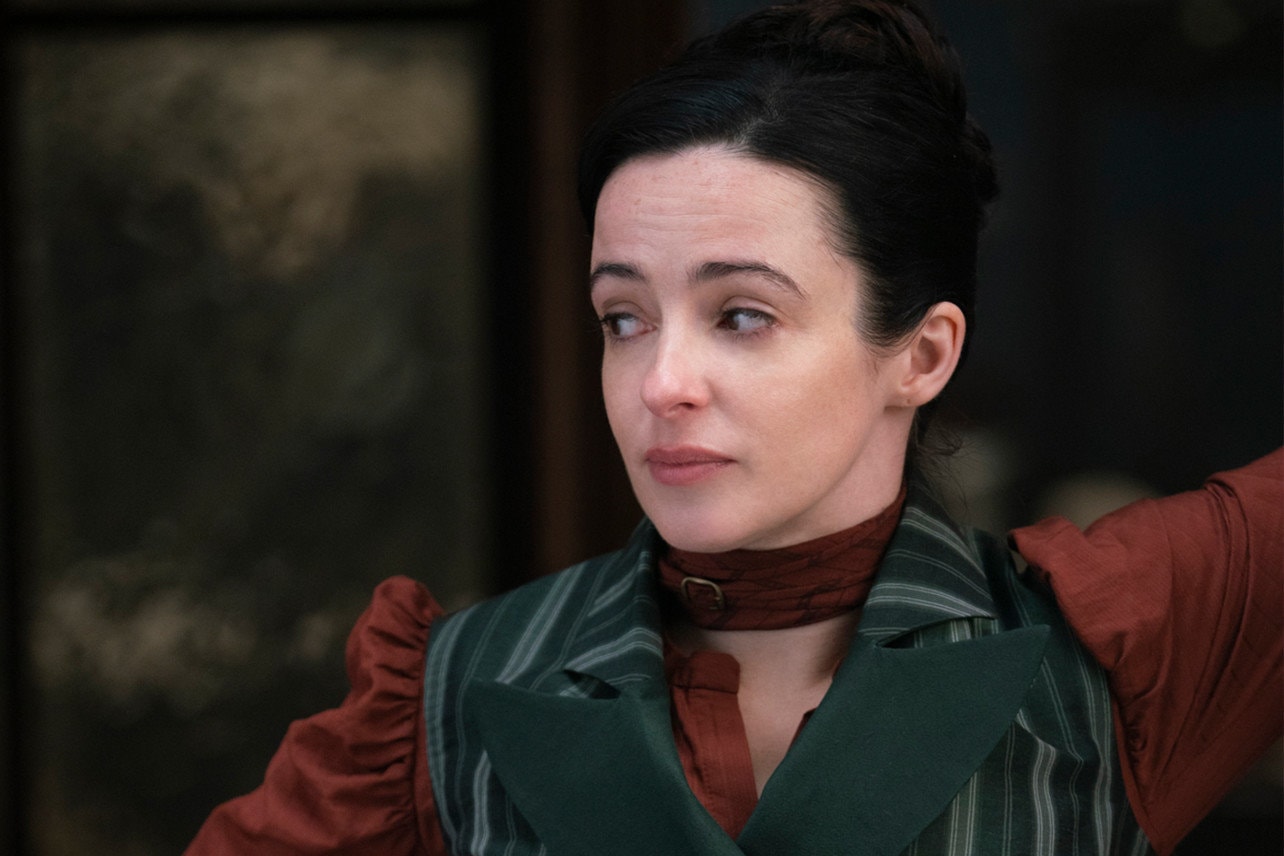 Read more: Amber Heard Posts A Touching Tribute To Her Mother After She Sadly Passed Away

Inspector Frank Mundi has a past with the abducted Mary (Eleanor Tomlinson), they were due to be married but she never showed up at the alter and we are still wondering why. Wondering why she didn’t turn up and also how did he get a girl like her. I did find this a very strange revelation but it makes sense why Mundi is so keen to find Mary; are there are still feelings there on both sides.

ANN SKELLY AND TOM RILEY ARE A JOY TO WATCH

Speaking of romance, I love the chemistry between Penance (Ann Skelly) and Augie (Tom Riley), Skelly and Riley’s scenes together are a pure joy to watch. Both characters are soft and almost calming to watch, especially when they are together. Augie is now aware he is touched; we even discover he can put his mind into a crow and fly in the sky while his human body is still present in the place he is in. He tells Penance how he used to dream about being a crow but then it actually happened in church.

We watch Penance and Augie bond in this episode, as Augie hasn’t told anyone he is touched; his own sister doesn’t even know. They bond over similar feelings and thoughts they have both gone and do go through. There is a spark there of romance and I want to see more of it because Augie is still a hidden touched and his presence with Penance is a big social class no no, so it will be interesting how Augie in particular navigates this complex issue. Augie clearly likes Penance; he can be himself around her but his sister is getting in the way because he has a character and position to uphold.

SURPRISES THAT YOU DON’T EXPECT IN THE NEVERS 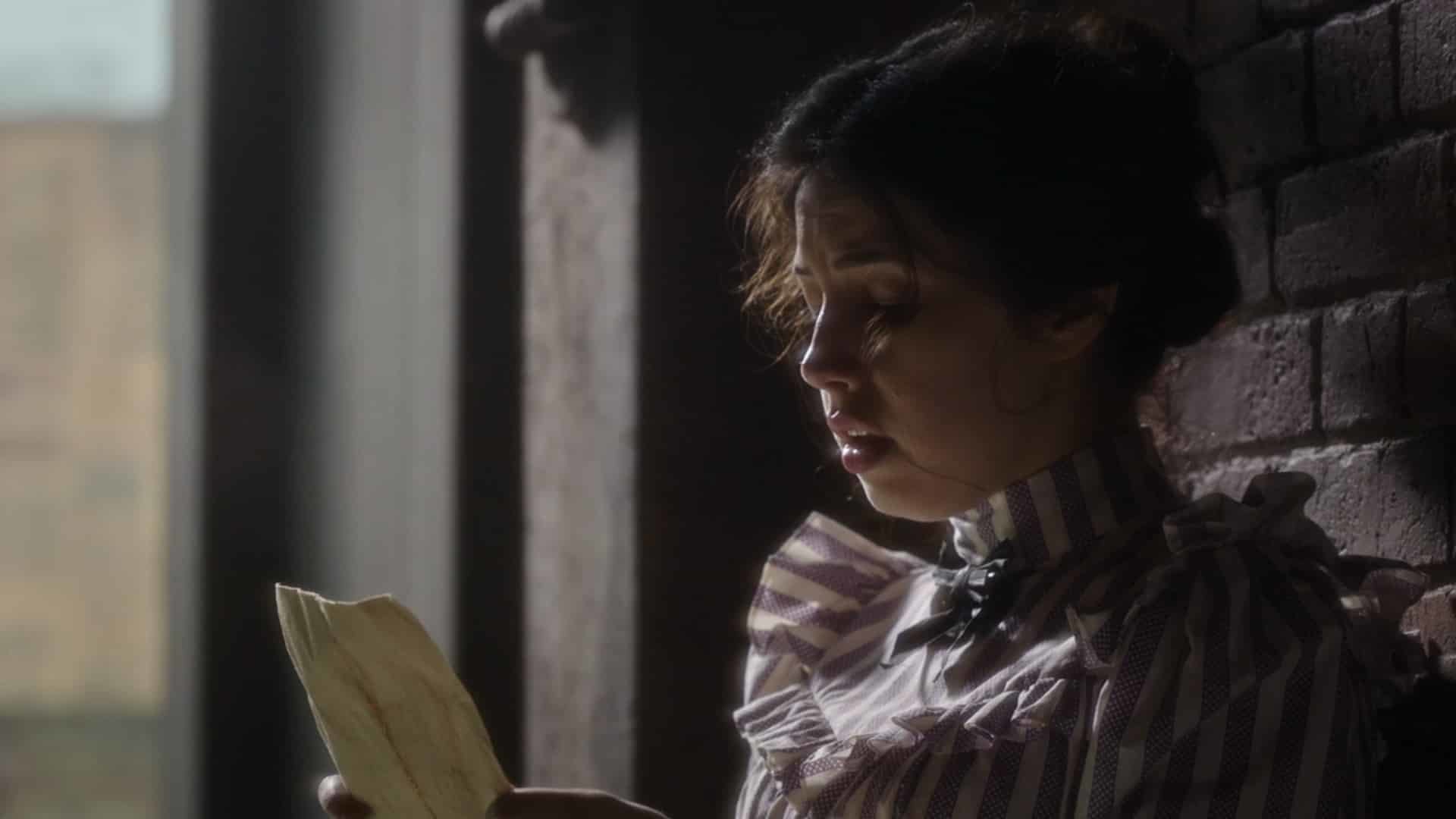 As mentioned previously, it feels as if all these characters are hiding something and it is only a matter of time before we learn their secrets they wanted to keep hidden. Two things really surprised me in this episode, one was that ending with Bidlow and the scientist, with Bidlow declaring war, on who we don’t know yet but I get the feeling the answer to that question won’t be clear cut.

Also, I was really surprised that Amalia and Maladie knew each other, they were once best of friends. Two characters that never crossed my mind for a second may have a backstory involving one another. In this backstory was a time when Amalia was known as Molly and Maladie was known as Sarah; Molly apparently turned her back on Sarah and left her to suffer while she delighted in life. Where these characters met is still unknown but we do get the impression that Maladie/Sarah isn’t completely 100% mentally sane. Maybe it was Amalia/Molly who got Maladie/Sarah sent to the asylum? Who knows but now this history has been brought up and questions are now flying around, they have to be answered in the next episode?

WHAT IS MALADIE’S MISSION IN THE NEVERS?

At the end of the first episode, we see that Maladie is the only one who remembers seeing the flying spaceship/object, which she now believes to be God. As a result, she now believes she is on a mission from God, what that mission is exactly, I’m not sure I’m a bit confused. However, with that being said I really enjoyed Amy Manson’s performances a lot more in this episode. It had me more engaged but that also might be due to the fact that we didn’t spend as much time with Maladie, our time and focus were shifted onto other characters in this week’s episode, but I’m not about mad it.

DO THE TOUCHED HAVE A PLACE IN SOCIETY? 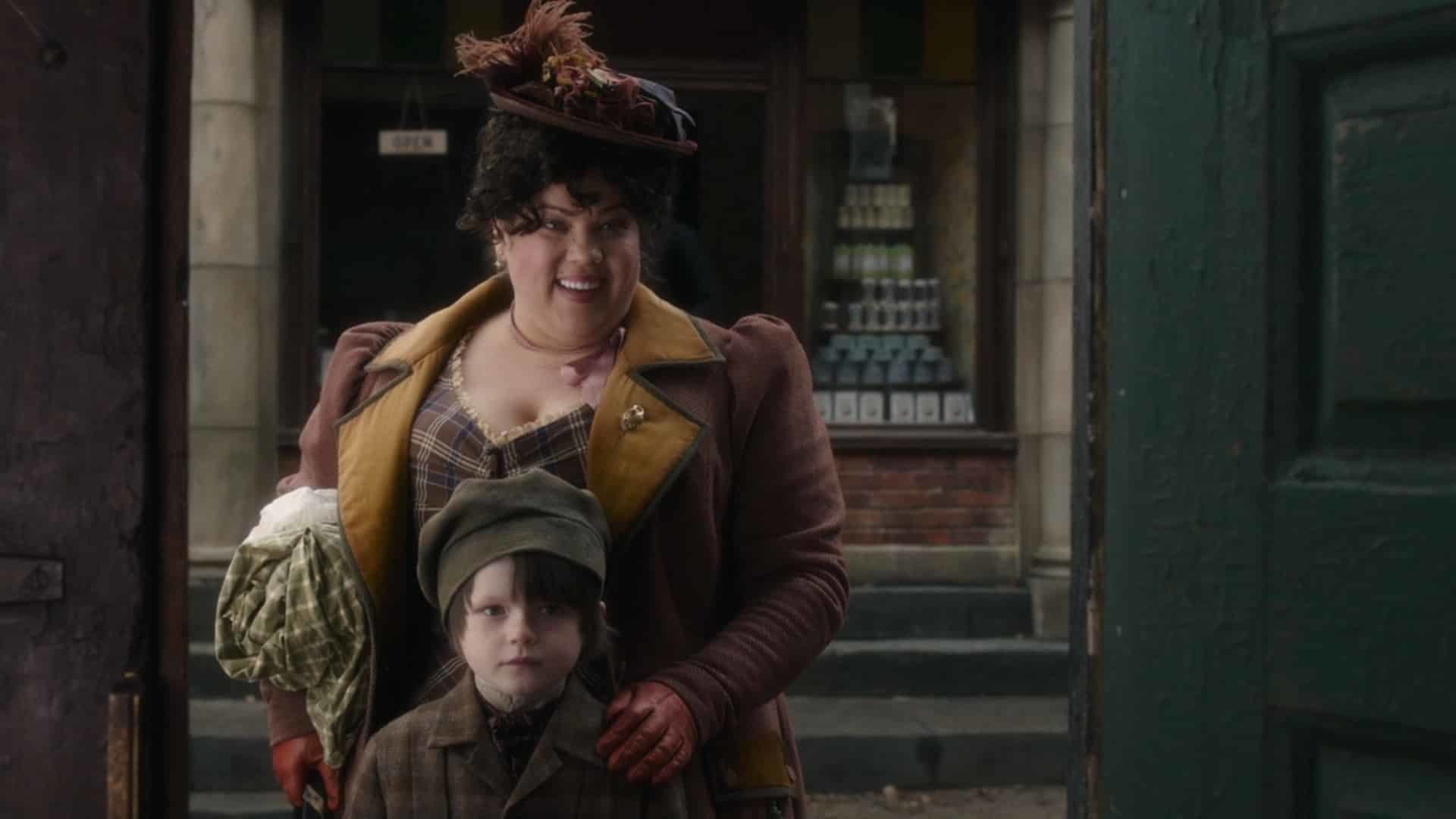 Yes, there is an evil scientist, Dr Hague (Denis O’Hare), who happens to be working for Lavinia Bidlow and Maladie is still on the loose but the focus at the moment seems to be society’s response to the touched. We are beginning to get hints of the bad guy but I’m not really sure who we should be more focused on Maladie or Bidlow or both? Society is split over how they should feel about the touched yet really all these women want is freedom and to just live their lives without having to watch their backs or feel bad for being a bit different.

MANY SECRETS AWAITING TO BE UNCOVERED IN THE NEVERS

I’m interested to know what the big glowing orb is under London that Bidlow is having mined and I want to know what Bidlow’s true intentions are. I’ve enjoyed this episode and it’s made me think about how we treat people today and how we did in the past too. If anything, this show is making me think about how we treat people when they appear to us a little different to what we know. The sets and costumes are beautiful to look at and really help to suck you into this beautiful world that is hiding many dark secrets, that I am really looking forward to discovering more about.

What do you make of this review of The Nevers Season 1 Episode 2?