If you’ve been following The Mandalorian you’ll know that Mando has been in search of a Jedi to help him find more of Baby Yoda’s kind. It was heavily rumoured that this Jedi in The Mandalorian Season 2 would be one Ahsoka Tano, and we now know that to be fact.

So, if you’re someone who is asking who is Ahsoka Tano? Or maybe just want a refresher, this is the place for you. We’ll go through her origins in-universe and out, from her first appearance to her most recent. 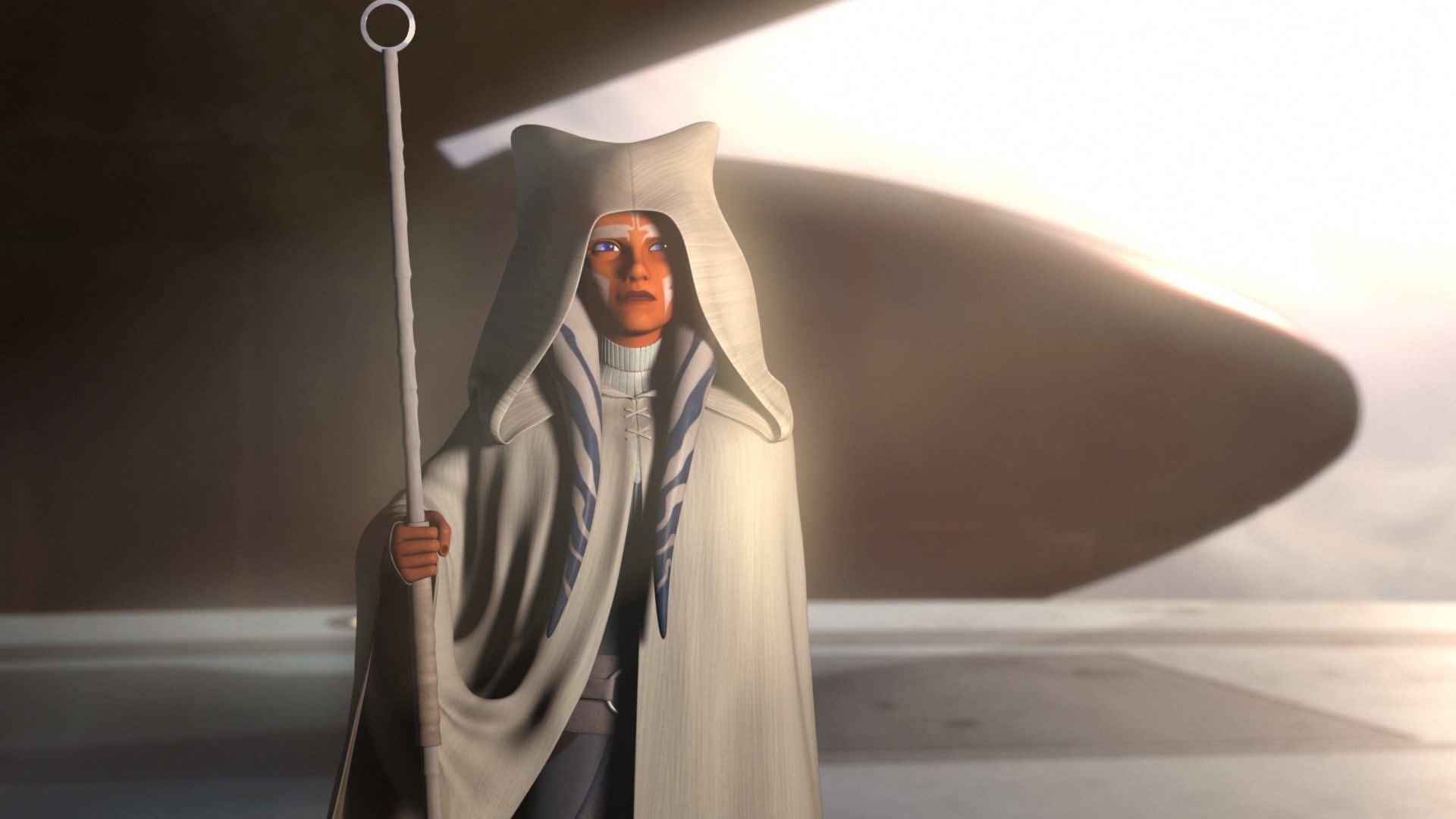 Read more: Star Wars: The Rise Of Skywalker’s J.J. Abrams Teases Ahsoka Tano Could Be In The Movie

Ahsoka first showed up in the animated The Clone Wars movie as Anakin Skywalker’s padawan set in between Attack of the Clones and Revenge of the Sith. The character was created by George Lucas himself as he wanted a character that the younger viewers of the show would be able to identify with.

At first, the character was not received well by the audience, as she was seen as annoying and an un-needed addition to the Star Wars story. But over time as the show matured and improved so did the character and by season 3, she quietly became the best character on the show. And when you’re dealing with the likes of Anakin and Obi-Wan, that is no mean feat.

What is so great about Ahsoka in The Clone Wars show is that in the beginning a lot of people, including myself, asked the question why does Anakin need an apprentice? What the show, and Ahsoka as a character, does is add another layer to Anakin that isn’t seen in the films.

The biggest complaint about the prequels is that the turn of Anakin is too sudden and isn’t developed enough. One of the best things about The Clone Wars is it takes the time to delve into him as a character and introducing his relationship with Ahsoka makes his turn to the dark side that much more tragic.

Clone Wars and beyond

By season 5 of the show, Ahsoka is accused of a crime she did not commit by the Jedi. She feels so betrayed she leaves the Jedi order behind. It is one of the best arcs in the whole show, watching her walk away from not just the Jedi, but Anakin who had by that point become her best friend.

The final season actually shows the events of Revenge of the Sith from Ahsoka’s perspective. There is an all-out war on Mandalore, Ahsoka and Darth Maul have an epic duel and by the time the empire rises she is forced into hiding.

A tie-in novel set after The Clone Wars by E. K. Johnston looks at what it’s like for Ahsoka to be on the run, not able to revel herself as a force user, but still have that need to help people.

She is hunted down by an Inquisitor (henchman of the Empire whose aim is to find and kill the remaining force-users in the galaxy who may have survived Order 66) and her resolve is put to the test.

It is a deeply personal story and a great book. I’d definitely recommend it if you’re looking for more Ahsoka in your life, or just looking for somewhere to begin with the expanded canon novels. It’s a good place to start.

Read more: Ahsoka Tano Might End Up With Her Own Live-Action Spin-Off Star Wars Series

She next shows up in the animated show Rebels, set in between Revenge of the Sith and A New Hope. And while she doesn’t play a large role in this show compared to The Clone Wars, it is an important one.

By this point in Star Wars history, George Lucas has sold Lucasfilm to Disney. In turn for Rebels, Dave Filoni, the supervising director and the other main creative figure behind The Clone Wars had full control over Ahsoka Tano.

In the show, Ahsoka is working with the beginnings of the Rebel Alliance and joins forces with the team of heroes that the show follows. The character changes a lot between shows, as she is much older, so the rash youngling of The Clone Wars is replaced with a much more level-headed and experienced Ahsoka.

It is hinted that Ahsoka has a feeling that Anakin is Darth Vader, but she doesn’t actually know the final fate of her old master for certain.

In the season 2 finale, Ahsoka fights Darth Vader where she finds out that he is indeed Anakin. It’s one of the best episodes of the show and leaves a question mark on whether or not Ahsoka survived the battle or not.

Read more: Ahsoka Tano Is Only Going To Be In One Episode In The Mandalorian Season 2

She did survive (yay!) and lives to join the team near the final episodes of the show’s run. Her story is open-ended leaving many fans to speculate that the next animated show from Lucasfilm will be centred around her in some way.

It would be a wise move as she is one of the most beloved characters in all of Star Wars and would be a real shame not to let the character have her much-deserved spotlight.

Starting life as a character who was annoying and, frankly, not wanted by fandom at large, Ahsoka has turned into a fan favourite and one of the most interesting characters in the entirety of Star Wars history.

She has also had one of the best journeys. She is no longer a Jedi, but something else. A force-using citizen of the galaxy, whose moral compass will always point her in the direction of helping people where help is needed.

With Dave Filoni involved, Ahsoka Tano’s appearance in The Mandalorian was surely inevitable. Now with her showing up in live-action Star Wars for the first time who knows where her future will lead; more appearances in shows like Kenobi, or maybe as the focus of her own animated show? One thing is for certain, the future of this fan favourite character is sure to be bright. #AhsokaLives.

What do you make of this feature? Are you looking forward to seeing Ahsoka Tano in The Mandalorian Season 2? Let us know your thoughts in the comments below.