It’s been revealed that the hit show Emily In Paris has been renewed for a Season 2 by Netflix. This news comes to us from Netflix themselves who sent us a rather amusing letter confirming the show would be getting a Season 2.

Emily In Paris took the world by storm a few weeks back when it dropped on Netflix. The show stars Lily Collins as a twenty-something marketing associate who moves from Chicago to Paris and then hilarity ensues – and a lot of poor French cliches.

The show was created by Sex And The City’s Darren Star and you can really tell. If feels as if people have been missing these sorts of shows as it ended up soaring to the number one spot on Netflix’s most-watched list. It also stayed there for quite some time.

We’re now hearing that Netflix has greenlight the second season of Emily In Paris, which shouldn’t come as much of a surprise. However, their announcement letter really needs to be read to be believed.

Emily In Paris Gets A Season 2 At Netflix 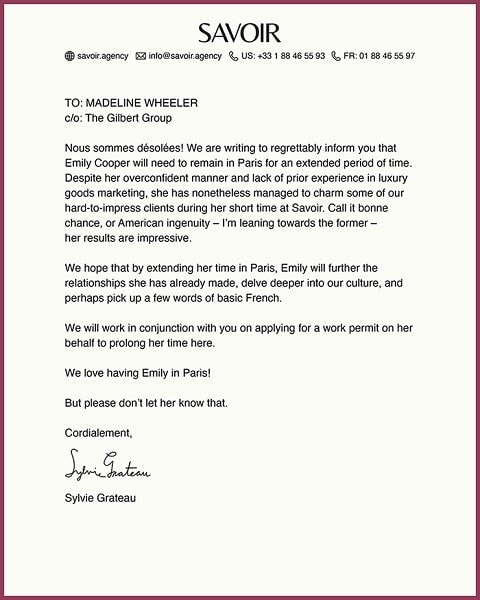 I really love that announcement letter that Netflix sent around announcing Emily In Paris Season 2. It’s cheeky, amusing and very, very French. It perfectly fits the show’s humour and I actually cannot wait to see Season 2.

Yes! I really enjoyed the first season. I grew up and currently live near Paris, so I enjoyed watching all the chiches. The show is silly and a bit of a fantasy, but it does get some things right about Parisians.

Netflix also released this little announcement video via Twitter, which I also liked. You can check it out for yourselves below:

Emily in Paris will return for Season 2! pic.twitter.com/QDOzpzjliz

What do you make of this news? Did you watch Emily In Paris Season 1 on Netflix, and are you looking forward to Season 2? Let us know your thoughts in the comments below.