Walter Hamada Out Of Warner Bros. Pictures And DC Films?

It seems like there’s even more turmoil on the Warner Bros. studio these days, and it feels like Walter Hamada’s days might be numbered. These last few years for WB hasn’t been the easiest. First, we had the executives not believing in Zack Snyder’s Cinematic Universe. He eventually stepped down from Justice League (or was fired, depending on the reports you read) and Joss Whedon took over. We all know how that turned out. The result was the Josstice League being pushed through so those same studio executives could get their end of year bonus.

What followed was executives being fired and Walter Hamada being put in charge of the DC Extended Universe films. Then news broke about Joss Whedon’s toxic behaviour on set, the internal investigation. The Geoff Johns debacle. The extremely sad multiple layoffs at DC Comics. Ray Fisher being very vocal about WB rewarding toxic behaviour. Accountability over entertainment.

In the midst of all that we received great news about Zack Snyder’s Justice League being completed and premiering on HBO Max. DC Fandome came and it really seemed like WB cared and listened to their fans again. Sadly, that didn’t last long.

And almost every time, the Warner Bros. PR machine swung into full effect. Dropping news here, a trailer there. Some fake info to misdirect the public. Jason Momoa as Frosty the Snowman – this was a Deadline EXCLUSIVE! But we all know his response to that: 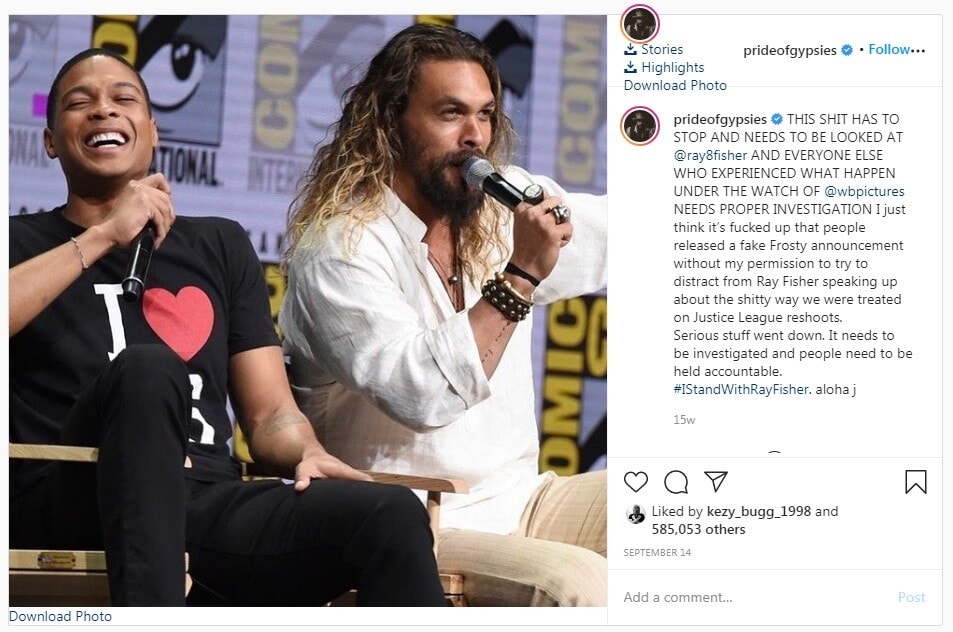 “THIS SHIT HAS TO STOP AND NEEDS TO BE LOOKED AT @ray8fisher AND EVERYONE ELSE WHO EXPERIENCED WHAT HAPPEN UNDER THE WATCH OF @wbpictures NEEDS PROPER INVESTIGATION I just think it’s fucked up that people released a fake Frosty announcement without my permission to try to distract from Ray Fisher speaking up about the shitty way we were treated on Justice League reshoots. Serious stuff went down. It needs to be investigated and people need to be held accountable. #IStandWithRayFisher. aloha j”

Have I missed anything before we get to the stuff that’s just happened in the last few days?

Warner Bros. fired Johnny Depp from Fantastic Beasts 3 (he still made $16 million off that deal, but that’s beside the point), and not only keeping Amber Heard as an actress in the studio by keeping her in Aquaman 2, and putting her in Zack Snyders Justice League. Then there are the reports of her being in Justice League 2 and having her own Mera spin-off. Regardless of what side you take, this just doesn’t bode well for Warner Bros. Especially since they think the petition for Amber Heard to be removed from WB films consists of bots.

So, let’s move on to what’s been happening in the last few days.

Just a few days ago, the NY Times put out a profile piece (if you can call it that) on Walter Hamada. That horrendously backfired and upset the #SnyderCut community. This is just my personal opinion, but I think that the studio reached out to the NY Times to run a piece on Hamada and his plans for the DCEU and the multiverse. What resulted was a comparison of WB to other studios – Disney/Marvel to name one – and a line (from an unknown exec) about Zack Snyder’s Justice League being one and done. With a caveat that if it does well, more could follow.

Well, this really upset the #SnyderCut community, and rightfully so. They are a very passionate fan base that has invested a lot into this campaign and director Zack Snyder. Moments after the article hit social media, #RestoreTheSnyderVerse was trending.

And this brings me to today’s news, which Edward reported on earlier: 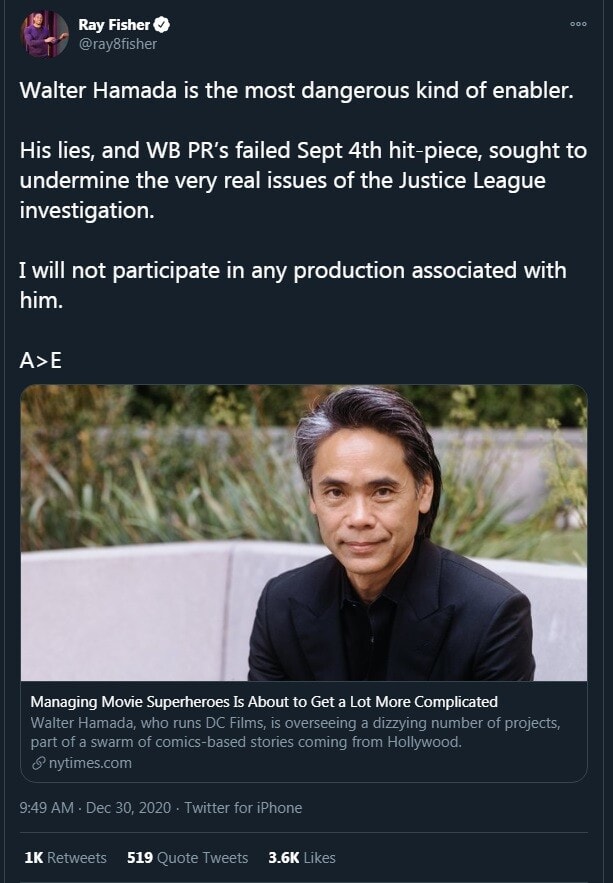 “Walter Hamada is the most dangerous kind of enabler. His lies, and WB PR’s failed Sept 4th hit-piece, sought to undermine the very real issues of the Justice League investigation. I will not participate in any production associated with him. A>E”

That is quite the statement to put out about a studio executive. Especially one that is spearheading the department you are involved in.

My first thoughts when reading that NY Times article was that the author was not a fan of Warner Bros., or Zack Snyder in particular. Now it seems today Ray Fisher gave us some more light to shed on what’s going on behind the scenes at WB.

I’ll give you some questions to mull over: Was the author of that piece aware of Walter Hamada’s enabling behaviour? Just recently or during the investigation? Or before? Or is he aware of more?

Ray Fisher has never been shy about stating how he feels WB have handled the toxic environment and personnel there. A lot of people are saying Fisher is biting the hand that feeds him and he will be gone, but I don’t believe it. If that was the case he would be gone by now – and so would Jason Momoa. Which brings me to the question:

Is Hamada on his way out of WB? A lot of signs are pointing to YES.

Is Ray Fisher (and to a lesser degree the author of that NY Times piece) aware that Walter Hamada is on his way out? It does seem very plausible. Maybe that NY Times profile piece (if you can call it that) was a last ditch effort for some good PR on Hamada on WB.

Interestingly enough, last night I was talking to Edward about this whole situation, and if there is a “civil war” going on in WB right now. We had decided to write a few articles on this subject in the coming days (after he reached out to some sources) but then Ray Fisher dropped that information on us and it all kind of fell together. It seems like there is a civil war going on, but whether that is between executives at WB, or WB and AT&T itself remains to be seen.

One thing for sure is, AT&T likes money. The Rock brings in a lot of money and he wants to fight Zack Snyders Justice League as Black Adam. Once it premieres in March, we can finally stop hearing about WB’s mandate of “Wait and see how it does before we make any concrete plans”.

Our good friend Syl of Syl Abdul Inc has done some streams the last few days on this subject. It’s definitely worth checking it out.

What do you think of all this news? Simply just conjecture or are the pieces falling into place? Do you think there’s a civil war in Warner Bros.? Let us know in the comments.