With the ominous title ‘Reunion’, during this week’s episode of Star Wars: The Bad Batch (Episode 8) we see our favourite gang of genetically modified misfits going up against Crosshair in the ruins of an old Republic ship.

Episode 8 of The Bad Batch picks up immediately where last week’s finished: the Bad Batch (Dee Bradley Baker) are scouring the old Jedi cruiser for weapons to sell and pay off their debts as Omega (Michelle Ang), with Wrecker’s help, continues to learn how to be a soldier. But don’t forget the scavengers have also called the empire and Crosshair arrives with battalions of troops to capture the renegade batch.

The Bad Batch Episode 8 rewards fans of The Clone Wars 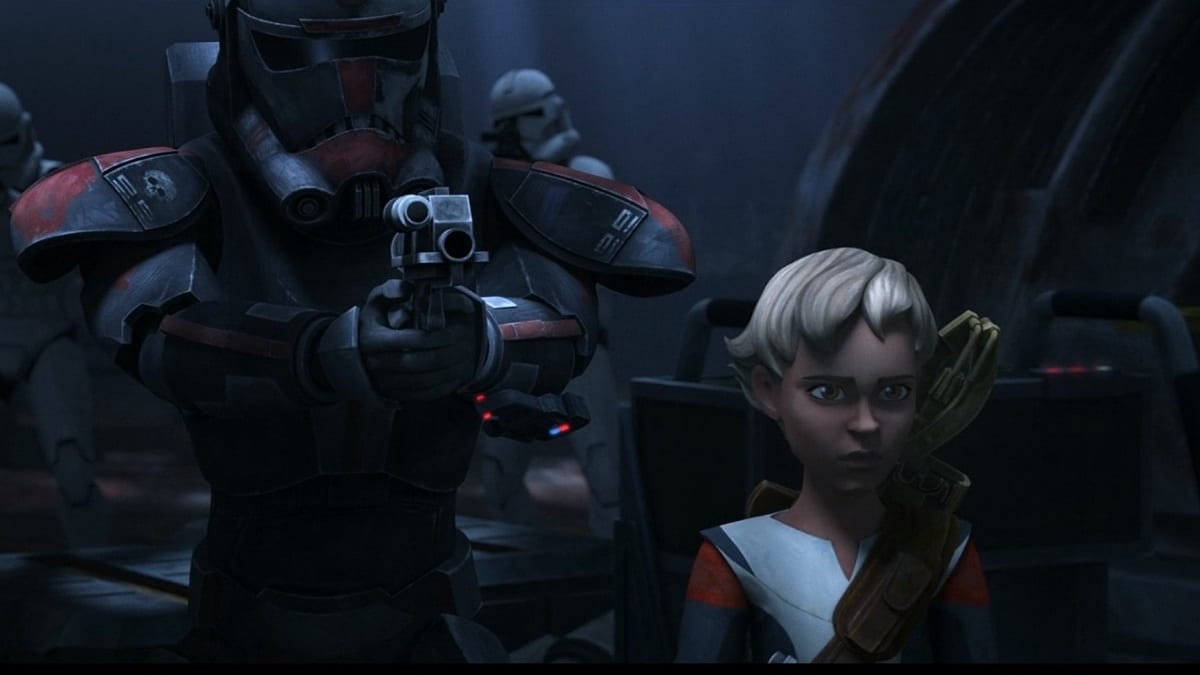 The ruins of the Republic and the beloved The Clone Wars TV show are the metaphorical battleground of this episode. So many locations – for example, the ship’s bridge – feel familiar because of how involved these ships were during The Clone Wars. Omega even asks Tech what the war was like, to which he replied: “It was a primary mission objective comprised of battles on various fronts.” For any fan of the previous show, with Omega looking out onto a graveyard of Republic ships, the irony of Tech’s literal and pragmatic way of viewing the war is amplified: the show humanised the war so that it was much more than an objective, we saw multiple of these “battles on various fronts” and came to love the soldiers and characters who fought on both sides.

As I pointed out last week, the setting of the broken Jedi cruiser lends itself to the gorgeous design that is typical to the show. The dark corridors lit only by single flashlights and, later in the episode, the ship’s engine lighting up Bracca’s junkyard again look amazing (who knew seeing an animated ship engine from an imaginative universe starting up could look so cool).

This episode also has some of the best-paced action seen so far. It’s not the open shooting of previous episodes but clever tactics on both sides.

Granted The Battle Batch rarely allows itself to be overly sentimental about the previous series but the way in which the episode draws on the history of the Clone Wars is clever. It’s unobtrusive enough for newcomers to watch the show and enjoy but otherwise, it is laden with hints and references for more dedicated fans to enjoy.

The return of a The Clone Wars villain

Nowhere is this more seen than with the introduction of another bounty hunter looking for Omega. Whereas before The Bad Batch looked ahead by including Fennec Shand from The Mandalorian, this week saw the return of Cad Bane (Corey Burton), the gravelly-voiced bounty hunter from The Clone Wars.

Bane is an homage to classic Western characters, and thus he is cool enough to make an impression. But fans of The Clone Wars will know how dangerous hieis (if that wasn’t emphasised enough during the episode) and his inclusion promises lots of exciting possibilities for future episodes.

Bane’s duel with Hunter alone makes the episode worth watching. Kevin Kiner’s score for the scene captured the perfect tone: it’s enough to pay homage to but not ridicule the Mexican standoff trope.

Episode 8 of The Bad Batch ends with the team in tatters. Bane captures Omega to return her to the Kaminoans, whilst Crosshair has also been severely injured. With the halfway point now reached I’m really excited with what’s the come. The season’s trajectory still remains unclear and it may be that the show will tie more into other films and TV shows, but consider me now fully on board for whatever will follow.

What do you make of this review of The Bad Batch Episode 8?

Anthony Walker-Cook has spent the past few years "working" as a theatre journalist in London alongside his post-graduate studies. Now, however, he wants to get back to the important things: games, films and good tv shows. Let's have a respectful chat on Twitter: @AntWalker_Cook