It’s been revealed that George Lucas’ sequel Star Wars trilogy would have featured Darth Maul as its main villain, which would have made so much sense. This was revealed in a recent book in about Star Wars which includes interviews with Lucas himself.

I got this news via Screen Rant, however, it was originally leaked via a user on Reddit. The user, called bothanspy89, posted a passage from this new book. The book’s called Star Wars Archives Episode 1-3 The Prequels.

According to the book, Maul’s journey would have been very different in the sequel trilogy Lucas was planning. Rather than building an alliance that would help him to achieve revenge against those who wronged him, Lucas wanted him to rise through the ranks and become a powerful figure in the galaxy. 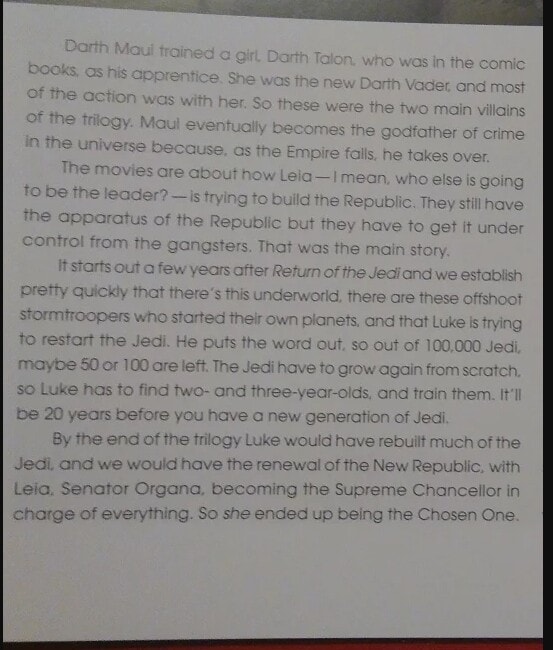 Here’s what Lucas revealed in one interview in the book:

Maul eventually becomes the godfather of crime in the universe because as the Empire fails, he takes over.

This is what would have happened in Lucas’ vision for the sequel Star Wars films. This means that Maul would have been the movies’ main villain and the one that the likes of Leia, Han Solo and Luke Skywalker would have had to go up against.

It was also revealed that Leia was going to be revealed as the actual Chosen One, not Anakin Skywalker. This would have been cool as far as I’m concerned, yet I know that certain fans wouldn’t have liked it. It would have gone against the original movies’ main narrative of Anakin being the Chosen One.

What do you make of this news? Would you have liked to have seen Darth Maul be the main villain in George Lucas’ sequel trilogy? Let us know your thoughts in the comments below.